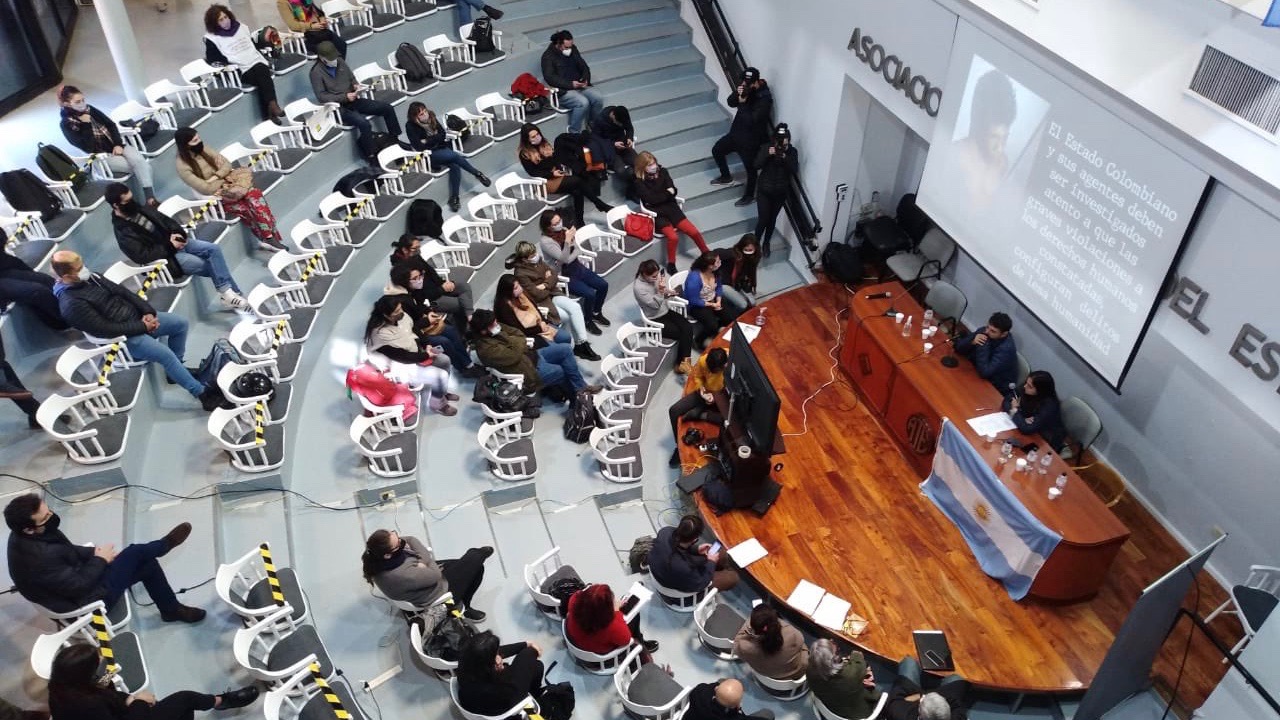 The final report of the International Mission of Solidarity and Human Rights Observation was presented on July 20 and called repressive acts carried out by Colombian security forces "crimes against humanity". Photo: ARG Medios

An International Mission of Solidarity and Human Rights Observation visited Colombia from May 25 to June 4 in the context of the National Strike to verify and document the human rights situation amid increased repressive actions by the state against civilians. On Tuesday July 20, several organizations that participated in the Mission presented the final report, where they questioned the repression unleashed by the Colombian State.

During the presentation, Adolfo Pérez Ezquivel said: “This is not new in Colombia, it has been going on for more than 60 years. We have participated in several international missions. This is about a terrorist state, they talk about a democratic government but there is nothing democratic about it. There are many reports from Colombia and the situation is getting worse. The peace agreements are not being complied with, people are disappearing and being displaced”.

The report concludes that the State has considered “its defenseless civilian population as an internal enemy and has unleashed on them a repressive violence typical of a warlike confrontation.” In this sense, they stated that the security forces “failed to comply with the criteria of proportionality, rationality, legality and necessity that are required of any state that is respectful of human rights.”

The Mission gathered information on the ground based on testimonies, evidence and complaints in the cities of Bogotá and the surrounding areas; the Cauca region with the cities of Popayán, Santander de Quilichao, Cali and the surrounding areas; and the cities of Pereira and Medellín. Victims, family members, various social groups, international organizations and religious authorities were interviewed. Meetings scheduled with judicial authorities in Bogota (Public Defender’s Office, Attorney General’s Office and Prosecutor’s Office) were cancelled by these agencies with no reason provided.

The report prepared by the mission concludes that the Colombian State is “responsible for the grave violation of the human rights of the civilian population,” and maintains that “a large part of the violations found, due to their systematic and/or generalized nature and directed against the civilian population, classify as crimes against humanity.”

The International Mission maintains that “the Colombian State must be investigated for the disappearances, homicides, tortures, torments, abuses, persecutions, threats, intimidation and other degrading and inhuman conducts committed by its regular security forces and even the non-regular ones that acted under its consent.” They added that it is also necessary to investigate “the use of sophisticated and lethal weaponry in violation of international protocols and regulations in force.”

At the same time, the members of the organizations stressed the need for Colombia to comply with the peace agreements signed in 2016 with the former guerrilla group FARC, and the cessation of the “systematic persecution, disappearance and murder of the signatories of those agreements and of the leaders of the different social and political organizations that express the genuine representation of the people.”

Finally, they emphasized that it is “imperative to dismantle the ESMAD”. The Colombian Mobile Anti-Disturbances Squadron, known by its acronym ESMAD, is a unit that was created in 1999 on a transitory basis but extended its operation during successive governments. It is a repressive force known for carrying out high levels of violence during protests and evictions, and the systematic violation of the population’s rights.

The International Mission of Solidarity and Human Rights Observation was integrated by the Justice Peace Service (Serpaj), the Permanent Assembly for Human Rights (APDH), the Coordinating Committee against Police and Institutional Repression (Correpi), Frente Patria Grande, the American Association of Jurists (AAJ), the Front of Organizations in Struggle (FOL) and the Association of State Workers (ATE), among others. The full report is available here.