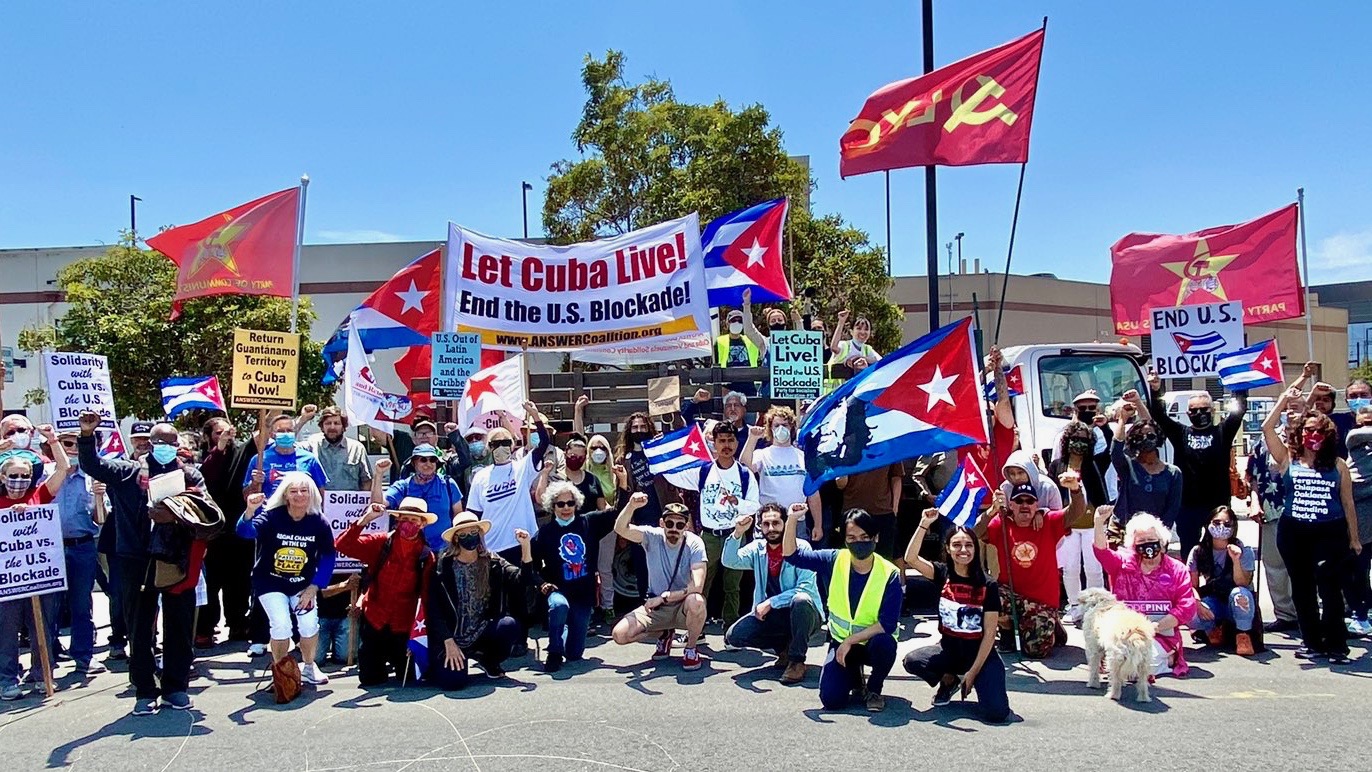 Activists in the US-city San Francisco organized a rally and car-caravan in support of Cuba and against the blockade. Photo: PSL

On July 22, US President Joe Biden and his Vice President Kamala Harris released a “fact sheet” on US “measures” against Cuba. The release from the White House said that Cuba was a “top priority for the Biden-Harris administration.” On March 9, Biden’s Press Secretary Jen Psaki said, “A Cuba policy shift is not currently among President Biden’s top priorities.” On July 12, NBC News reporter Kelly O’Donnell asked Psaki if Biden had reassessed his priorities regarding Cuba after the protests on the island the previous day. “In terms of where it ranks in a priority order,” Psaki replied, “I’m not in a position to offer that, but I can tell you that we will be closely engaged.”

Not a priority, closely engaged, top priority: matters have moved rapidly from March 9 to July 22. What moved the Biden-Harris administration to focus so quickly on Cuba? On the morning of July 11, some people in Cuba—notably in the town of San Antonio de los Baños—took to the streets to express their dissatisfaction with the social and economic problems created by the US-imposed blockade and by the global pandemic. The reaction to these events in Havana and in Washington, D.C., is instructive: Cuba’s President Miguel Díaz-Canel heard the news of the protests, got into a car, and drove the 40 miles to San Antonio de los Baños, where he met with the people; while in Washington, Biden used the protest to call for the overthrow of the Cuban government. US government-funded nongovernmental organizations and Cuban American groups hastened to take advantage of the frenzy, excited by the possibility of regime change in Cuba.

On the evening of July 11, tens of thousands of Cubans rallied across Cuba to defend their revolutionary process. Since that Sunday evening, Cuba has been calm.

Eleven days after those events, the Biden administration announced its “measures” for the island. There are two kinds of pressure engineered by the United States government: tightening the blockade and lies.

In December 1950, the US government created the Office of Foreign Assets Control (OFAC), which manages the sanctions programs. Sanctions are a key element in the US government’s “maximum pressure” campaign against its adversaries. Cuban banks and Cuban businesses as well as Cuban government officials populate the OFAC list alongside businesses and officials from about 30 other countries. In the “fact sheet,” the US government mentioned the addition of “one Cuban individual,” namely Cuba’s minister of defense. He is accused of “facilitating the repression of peaceful, pro-democratic protests in Cuba.” The term “repression” is used loosely. In 2020, police officers in the United States killed 1,021 people, almost three people per day. There is no state violence at this scale anywhere in the world, let alone in Cuba.

Who is Álvaro López Miera?

Cuba’s minister of defense is Álvaro López Miera, who took this post in April 2021. In 1957, at the age of 14, López Miera went up to the Sierra Maestra to join the rebels against the dictatorship of Fulgencio Batista. He was motivated by his parents, who had been partisans in the Spanish Civil War, and who fled to Santiago de Cuba when the Spanish Republic was defeated by the fascists in 1939. López Miera was allowed to participate in the Second Front led by Raúl Castro, but only in the education department. He spent the next two years teaching peasants in the Sierra how to read and write.

Subsequently, López Miera worked in the Cuban military, volunteering to be part of the anti-colonial Operation Carlota in Angola in 1975 (where he returned in 1987) and to be part of the defense of Ethiopia against Somalia in the Ogaden War in 1977-78. He is now sanctioned by the US government.

The “fact sheet” casually repeats several accusations against Cuba that are simply not true. For one, the US government accuses Cuba of the “intentional blocking of access to the Internet.” Countless reports make this accusation, but their evidence is scant (for instance, the Open Observatory of Network Interference found that as of July 23, the Cuban government had blocked 86 websites, many of them US government-funded regime change sites, while the United States had blocked 2,661 sites); in fact, many US internet corporations—such as Zoom—prevent Cubans from using their technology. Secondly, Biden’s administration repeats the fantasy of a 2017 “sonic attack” on the US diplomatic officials in Havana.

After the July 11 events, the US government circulated a one-page “Joint Statement on Cuba” among members of the Organization of American States (OAS) to get them to condemn Cuba. On July 21, Cuba’s Foreign Minister Bruno Rodríguez Parrilla, who released the leaked draft on Twitter, strongly criticized the “interventionist maneuvers” of the United States “to intensify the blockade” against Cuba.

On July 24, after Biden’s “fact sheet” and “joint statement” made the rounds, Mexico’s President Andrés Manuel López Obrador said that the Washington-dominated OAS needed to be replaced by an organization that is not “a lackey of anyone.” These comments were made on the birthday of Simón Bolívar, known in Latin America as the Liberator. From the port of Veracruz, Mexico, two ships—Liberator and Papaloapan—left laden with food, medicines and other goods for Cuba. Russia sent 88 metric tons of supplies on two aircraft.

On July 23, a full-page statement appeared on page 5 of the New York Times under the headline, “Let Cuba Live.” The advertisement, paid for by the Peoples Forum, was signed by more than 400 prominent people including Susan Sarandon, Emma Thompson, Noam Chomsky, Mark Ruffalo, Jane Fonda, and Danny Glover. It was an open letter to Biden asking him to end Trump’s “coercive measures” and “begin the process of ending the embargo.”

Most of the 193 member states of the United Nations made public statements to defend Cuba against the “maximum pressure” campaign. In a statement, the 120 members of the Non-Aligned Movement (NAM) “strongly condemn[ed] the international campaign organized… with the purpose of destabilizing the Republic of Cuba.” The NAM called for an end to the US blockade.

The White House has so far responded neither to the open letter nor to the NAM statement.

Manolo De Los Santos is a researcher and a political activist. For 10 years, he worked in the organization of solidarity and education programs to challenge the United States’ regime of illegal sanctions and blockades. Based out of Cuba for many years, Manolo has worked toward building international networks of people’s movements and organizations. In 2018, he became the founding director of the People’s Forum in New York City, a movement incubator for working-class communities to build unity across historic lines of division at home and abroad. He also collaborates as a researcher with Tricontinental: Institute for Social Research and is a Globetrotter/Peoples Dispatch fellow.