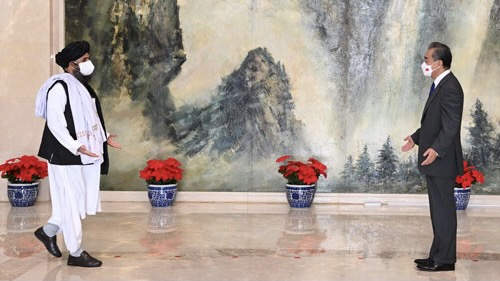 On July 28, 2021, in the Chinese city of Tianjin, China’s Foreign Minister Wang Yi met with a visiting delegation from Afghanistan. The leader of the delegation was Mullah Abdul Ghani Baradar, the co-founder of the Taliban and head of its political commission. The Taliban has been making significant territorial gains as the US military withdraws from Afghanistan. During the meeting, China’s Wang Yi told Mullah Baradar that the US policy in the Central Asian country has failed, since the United States had not been able to establish a government that is both stable and pro-Western. In fact, Pakistan’s Prime Minister Imran Khan also emphasized this point and told PBS in an interview on July 27 that the US had “really messed it up” in Afghanistan. The government in Kabul—led by President Ashraf Ghani—remains locked in an armed struggle with the Taliban, which seems likely to march into Kabul by next summer.

China’s meetings with the Taliban are practical. China and Afghanistan share a very short—76-kilometer—border, which is relatively unpassable. But the real transit point between the two countries is Tajikistan, which has long feared the return of the Taliban to Kabul and the emergence of a free hand to extremism in Central Asia once more. From 1992 to 1997, a terrible civil war took place in Tajikistan between the government and the now-banned Islamic Renaissance Party; tensions over the growth of Taliban-inspired Islamism remain intact in the country.

Tajikistan’s President Emomali Rahmon has sought assistance from Moscow and Beijing to help in case his country is overrun by refugees from Afghanistan. The Shanghai Cooperation Organization (SCO)-Afghanistan Contact Group met in Tajikistan’s capital of Dushanbe on July 14. Afghanistan is not a member of the SCO, although it made an application to join in 2015. The day before that meeting, China’s Foreign Minister Wang Yi visited President Rahmon in Dushanbe to discuss the deteriorating situation and “carry out more substantive security cooperation.” At the core of their agenda was President Rahmon’s pledge to prevent his country from becoming a base for extremism.

In Tianjin, Mullah Baradar told Wang Yi that the Taliban would not allow any extremist organization to use Afghan territory to undermine the “security of any country.” In the public statements made by both of them after their meeting on July 28, neither Baradar nor Wang Yi, however, expanded on this pledge. What they have in mind is the East Turkestan Islamic Movement (ETIM), more accurately known by its Uyghur name—Türkistan Íslam Partiyisi (TIP). The ETIM emerged three decades ago and has since carried out a series of attacks in the Xinjiang Uyghur Autonomous Region in China. It is a shadowy extremist group, one of dozens of such groups that emerged in Central Asia in the orbit of Al Qaeda. Since 2002, the ETIM was featured prominently on the US government’s list of terrorist organizations. In a recent report, the US State Department noted, “[the] ETIM has received training and financial assistance from al-Qaida.”

During the war on Syria, large sections of the ETIM—as the TIP—moved to the Syria-Turkey border. The TIP is currently headquartered in Idlib, Syria, where it has joined forces with other Turkish-backed jihadi groups. The TIP’s leader Abdul Haq al-Turkistani is an Al Qaeda shura council member. In the fall of 2020, the US government removed the ETIM from its list of terrorist organizations, making no mention of the TIP or Syria. The United Nations, meanwhile, retains the ETIM on its terrorist list.

The meeting between Baradar and Wang Yi was focused on the threat the ETIM posed to China’s western provinces, particularly to the Xinjiang Uyghur Autonomous Region. The ETIM has taken credit for several terrorist attacks on the Chinese province and on Chinese targets elsewhere. Baradar’s pledge has helped release some of the tension in Beijing regarding the possible return of the Taliban to power in Kabul.

In May 2020, a committee of the United Nations Security Council reported that the ETIM is operating in three provinces of Afghanistan: Badakhshan, Kunduz, and Takhar, all three near the wedge that links China to Afghanistan. There are about 500 hardened ETIM fighters inside Afghanistan. The ETIM has close links to several of the Al Qaeda affiliates in Central and South Asia, such as the Islamic Movement of Uzbekistan, the Islamic Jihad Movement, and the Tehrik-i-Taliban Pakistan.

In mid-July 2021, a bus en route to the Dasu hydropower plant in the Upper Kohistan region of Khyber Pakhtunkhwa, Pakistan, was attacked by a bomb blast. Twelve people died, including nine Chinese engineers. Ten days later, Pakistan’s Foreign Minister Shah Mahmood Qureshi arrived in Chengdu, China, to meet with Wang Yi. Qureshi said that terrorist acts will not “sabotage Pakistan-China cooperation.” No group took responsibility for the attack. Arrests have been made, but no clarity has emerged. Informed sources in Islamabad, Pakistan, suggest that the attack was done in concert between the Tehrik-i-Taliban Pakistan and the ETIM.

Both the Tehrik-i-Taliban Pakistan and the ETIM have made public statements about targeting China’s Belt and Road Initiative (BRI), which has four major corridors that run through Xinjiang and into Central and South Asia. The hydropower plant in Dasu is part of the BRI’s China-Pakistan Economic Corridor (CPEC); the three other BRI projects threatened by the ETIM and its partners are the China-Central Asia-West Asia Economic Corridor, the China-Mongolia-Russia Economic Corridor, and the New Eurasia Land Bridge Economic Corridor.

Peace is not on the horizon for Afghanistan. The country remains caught in the ambitions of regional and global powers, wedged in the new “great game” that involves a contest between India and Pakistan as well as the United States versus China, Russia, and Iran. The call for a unity government that would include President Ghani and the Taliban does not resonate in any quarter. Both sides believe that they can make gains starting in winter and continuing into next summer. This is myopic, since it carries within it the possibility of an endless civil war that could threaten the region.

A military victory is unlikely. The BRI’s vast investment in infrastructure could provide new economic opportunities in a region starved of a future. Even in the heartlands of the most extremist groups, social forces gather for peace and for development. In late July, in a region south of Kabul, in the Pakistani town of Makin, lawmaker Mohsin Dawar—a leader of the Pashtun Tahafuz Movement (PTM)—held a massive rally against Pakistan’s interference in Afghanistan and for peace.

On the last day of July, China’s Ambassador in Kabul Wang Yu met with Abdullah Abdullah, chairman of Afghanistan’s High Council for National Reconciliation, to talk about China’s support for a peace process. There was no statement about further Chinese investment in Afghanistan, although if the BRI is to proceed, it would require stability in Afghanistan. That is why China has been engaging both the Kabul government and the Taliban, the two key players necessary to ensure stability in the region.