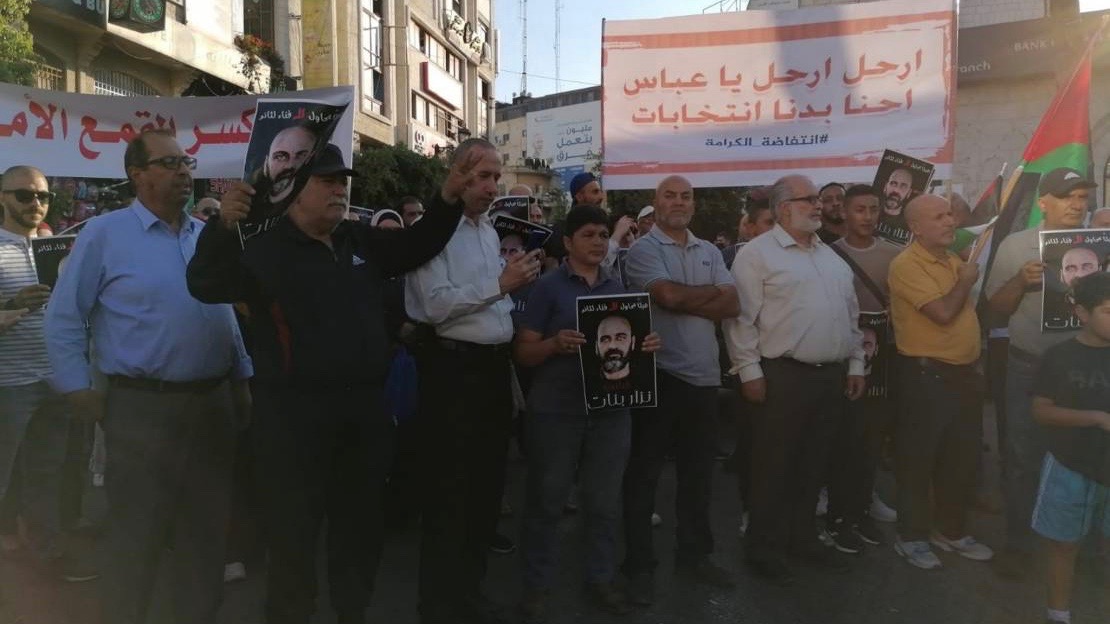 Hundreds of Palestinians participated in demonstrations on Monday, August 2 in Ramallah in the occupied West Bank to mark 40 days since the killing of activist Nizar Banat. The well-known Palestinian political and social activist died under suspicious circumstances on June 24 after the Palestinian Authority’s (PA) security forces conducted a violent night raid at his home in Hebron. They reportedly beat him mercilessly and stripped him naked. He was later dragged into a military vehicle and taken away. The PA forces did not specify the reasons for his arrest or where they were taking him.

PA authorities later announced that Banat had died in hospital after a sudden and “severe deterioration” in his health. Following widespread protests over the next few days, the PA ordered an investigation into Banat’s killing and the allegations against security forces by his family members.

Protesters on Tuesday held photographs of Banat and banners written in Arabic demanding justice. They raised slogans against the PA and president Mahmoud Abbas, calling for him to resign, saying “Abbas, dissolve the authority and get out.” Protesters also denounced the PA’s security cooperation with Israel and accused it of being complicit in “chasing and liquidating” Palestinians who are fighting the occupation.

Highlighting the recent developments in the Sheikh Jarrah forced expulsions case, the protesters commended the Palestinian residents of the East Jerusalem neighborhood for defending their homes and staving off the sustained Israeli onslaught backed by a biased justice system to force them to surrender their property to Israeli Jewish settlers.

PA security forces in plain clothes confronted and clashed with the protesters and tried to arrest several of them, but they reportedly managed to evade arrest.

Calling for Banat’s culprits to be severely punished, the protesters demanded that the PA disclose the findings of the investigation in the matter. Hamas official Hussein Abu Kwaik said in a statement, “Nizar Banat was oppressed and murdered because he defended Palestinians, now all Palestinians are demanding justice for him. Nizar Banat is the man of word and revolution. He sacrificed his time, effort, blood and soul for the sake of achieving rights. They murdered him because they do not want Palestinians to live in freedom or have a dignified life. They want the people as a herd.” He also urged the PA to hold elections in the occupied Palestinian territories.

Banat himself was a candidate in the now cancelled Palestinian legislative elections which were supposed to be held in May this year. He was a fierce critic and political opponent of the PA, the Palestine Liberation Organization (PLO), and the ruling Fatah party. He had spoken out against the PA’s financial corruption, security coordination with Israel, and other issues such as the deal between PA and Israel to exchange Pfizer’s COVID-19 vaccines which were later found to be very close to the expiry date. He also accused the PA of putting at risk the lives of millions of Palestinians. In the weeks before his death, he had heavily criticized the PA for cancelling the elections and called for massive popular protests against the PA on his social media posts and videos.