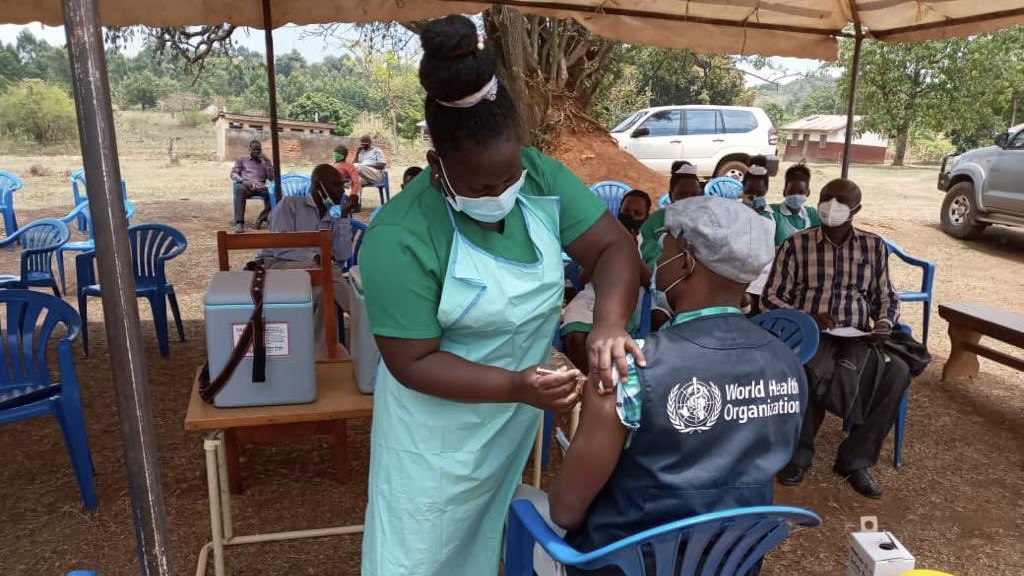 COVID-19 vaccine being administered in Uganda. Photo: WHO Uganda

The total COVID-19 cases in the 55 African countries crossed 7.1 million on Thursday, August 12, however only 1.75% of the continent’s population has been vaccinated. The pace of vaccination drive, which saw temporary suspension in many countries due to shortage in supply, has picked up over the last weeks after about 12 million doses were supplied in July through COVAX, a global vaccine sharing scheme backed by the WHO.

The number of doses received is thrice the total supplied to Africa over the last three months. Donations are also being facilitated through bilateral arrangements and via the African Union (AU). However, the supply continues to fall way short of the requirement of this continent of over 1.3 billion people, amounting to about 16% of the world’s population.

According to the Africa Center for Disease Control and Prevention (CDC), almost 68% of the supply has already been administered. This has not been sufficient to vaccinate even 2% of the population fully. Only 4.04% have received the first dose.

He went on to say that the wealthy countries negotiated deals with the vaccine manufacturers to procure in excessive quantities, even before the vaccines were produced, leaving the developing world unable to procure sufficiently for their populations.

South Africa has over half of all identified COVID cases on the continent and 75,774 of the 180,014 resulting deaths. Analysts have pointed out the actual death count may be far higher. A recently published paper by researchers from the Medical Research Council (MRC) and the University of Cape Town (UCT) has argued that the deaths in South Africa due to COVID-19 in 2020 were more than double the official figure.

The vaccine drive in South Africa, which began in mid-January, has administered 8.62 million of its total supply of 14.4 million doses, which suffices to fully vaccinate slightly over 12% of its 59.3 million population. AstraZeneca, BioNTech, and Johnson&Johnson (J&J) have been approved for use, although only the latter two are being administered for now.

The first dose has been administered to only 14.5% of the population, mainly healthcare workers and those with comorbidities. None have received the second dose. 0.57% who have received J&J jab, which requires only one dose, are fully vaccinated.

Of the total 52 million vaccines administered on the continent, only 1% has been produced within the continent. Urging that “HICs should … support the North-South technological transfer to ensure that capacity is built in LMICs and that there are sustainable vaccine manufacturing projects,” Dhlomo also pressed on the need for African governments to invest in building vaccine manufacturing capacity.

However, the fear of being downgraded by private credit agencies, which makes it enormously difficult for states to borrow internationally, has been a significant factor holding the states back from undertaking public expenditure on health and other social sectors during the pandemic.

Such fears are well-founded. For instance, Morocco — which, with 720,256 known cases, is the second most infected country on the continent — decided last year to expand its expenditure to combat the pandemic and has by now fully vaccinated 30.45%.

However, soon after the decision was made to increase expenditure, Fitch downgraded the country’s credit rating to ‘junk’ in October last year, citing this fiscal expansion on health and social sectors as the reason. In April 2021, Standard & Poor’s also followed suit.

In May 2021, Ethiopia — which with 286,286 cases follows Morocco after Tunisia that has recorded a total of 616,764 cases — was downgraded by Moody’s because the country sought debt relief under a G20 initiative, aimed at easing the mounting debt burden on developing countries during the pandemic.

The chief economist of Gemcorp Capital, Simon Quijano-Evans, had spelled out in as many words at the time that any sub-Saharan country seeking debt relief under this initiative will be denied access to private capital.

“Ivory Coast and Benin are the only two countries in sub-Saharan Africa that have been able to borrow in international markets since the pandemic began. Others chose not to borrow, at least in part, it seems, out of fear of the rating downgrades that might result. This has prevented them from financing much-needed spending,” Ramya Vijaya, an economic professor at Stockton University, wrote in The Conversation.

Based on an analysis of changes in the credit rating of 140 countries between 2000 to 2018, Vijaya’s research shows that downgrades in credit ratings lower government expenditure on healthcare.

The National Bureau of Economic Research (NBER) published a working paper that argued that “credit rating is the only variable to show up consistently as the strongest determinant of fiscal policy during the COVID-19 crisis. Although high-income countries have better credit ratings than low-income countries, our results also hold when we control GDP per capita in our regressions. That is, even among high-income, advanced economies, a country’s credit rating affects its ability to pursue expansionary fiscal policies.”

Nevertheless, only 4.6% of the downgrades by these three agencies between January 2020 and February 2021 targeted the developed economies, while the remaining affected the developing countries, according to research by CountryRisk.io.

Calling out the “Big Three” credit rating agencies for “conflict of interest,” “rating with ideological bias,” and “lack of accountability, the UN Human Rights Council published a report in February 2021. The report argued the need to reform and regulate these agencies to prevent them from thus impeding the enjoyment of human rights in developing countries.