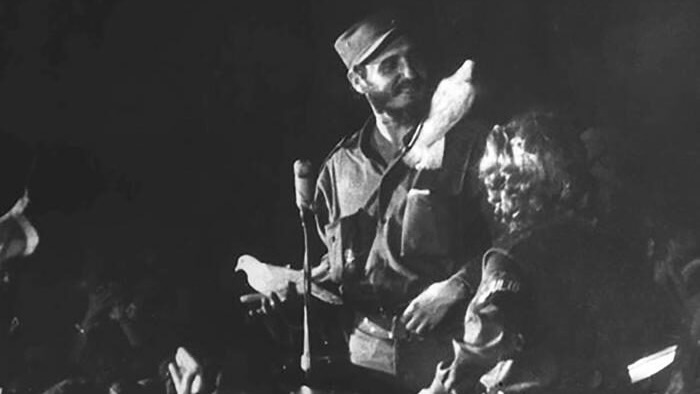 I first saw Fidel Castro in person during the Non-Aligned Movement (NAM) meeting in New Delhi in 1983. Castro had come to hand-over the chair of NAM from Cuba, which hosted the 1979 meeting, to India. He was greeted at the Delhi airport by India’s Prime Minister Indira Gandhi, whom he called “sister.”

At the meeting, Castro was the star. He held together the 101 countries that gathered under an entirely new leadership. India’s Nehru, Egypt’s Nasser, Indonesia’s Sukarno, and Yugoslavia’s Tito – the founders of NAM in 1961 – were no longer present; the new names were Gandhi and Castro with new revolutionary leaders such as Grenada’s Maurice Bishop and Nicaragua’s Daniel Ortega. Even as many NAM members drifted away from the Third World Project, their leaders turned to Castro to speak what they had begun to hide deep inside their hearts.

The new context was dire: Mexico declared bankruptcy in 1982 due to the escalating Third World Debt Crisis, with twenty-one countries present in the room afflicted by repayment difficulties (two years later, Brazil opened criminal proceedings against former Minister Delfim Neto for poor stewardship of public money). The total debt was about $1 trillion, with most of it owed to private banks. Most of the countries in the room faced serious issues of default. They had been asked by the International Monetary Fund (IMF) to enter a Structural Adjustment Program, which meant to subordinate their own national development strategy to the interests of wealthy banks and wealthy bondholders. The catastrophe was evident.

Fidel Castro used the 1983 NAM meeting and a meeting on debt held in Havana in 1985 to urge the members of the Third World to go on a debt strike. The NAM states did not agree to a debt strike, but the NAM economic commission – chaired by Nicaragua – produced a strong statement on financial suffocation. A new international monetary system was needed to “put an end to the dominance of certain reserve currencies, guarantee developing countries a role in decision-making, while ensuring monetary and financial discipline in the developed countries and preferential treatment for developing countries.” The goal on the table was to revive discussion of the New International Economic Order, passed by the UN General Assembly in 1974, and now a point of discussion emanating from Cuba.

I remember all 1.9 meters of Fidel Castro sailing through the hallways, talking to the delegates, urging them to focus attention on the financial suffocation of our dreams. Not only did Castro do the key political work – ensuring that Palestine’s Yasser Arafat remain in the meeting after a clash with the NAM secretariat – but he reminded the Third World of its mission, namely, to defend the rights of most of humankind against the casino of capitalism and the weapons of imperialism. When Castro spoke, he smiled, and his smile lit up a room even as he told the world the key truths of our time. In 1983, the key dilemma of humanity was the debt crisis. Castro focused our attention on the great debt overhang, which was used then and is used now to starve the national liberation projects of necessary resources.

At every moment in his life, Fidel Castro lifted up the crisis of the moment and focused attention upon it: the attempt by imperialism to prevent decolonization, the warmongering of the imperialist states, the growth of the financial casinos, the terrible climate catastrophe, the imperialist information war against ideas of humanity…. Each of these great dilemmas needed attention, but because of the information war by the imperialist institutions, they were not properly addressed. Castro’s role for those of us in places such as India, was to be the loudspeaker for humanity, to raise the kinds of issues that we needed uplifted.

The second time I saw Fidel Castro at an international meeting was in 2001, during the World Congress Against Racism in Durban (South Africa). South Africa’s people had overthrown the apartheid regime in 1994, the scars of that terrible history unhealed. Castro forthrightly condemned racism and other intolerances, but he – in his characteristic fashion – linked the scourge of racism to the ongoing debt crisis. “There are the huge and unpayable debts, the disparate terms of trade, the ruinous prices of basic commodities, the demographic explosion, the neoliberal globalization and the climate changes that produce long droughts alternating with increasingly intensive rains and floods. It can be mathematically proven that such a predicament is unsustainable,” he said. Because of this and due to the plunder of the colonial era, Castro argued for reparations as a “moral duty to the victims of racism,” namely to the victims of colonialism, slavery, and genocide.

I can hear his voice still, a voice of great moral clarity that the world heard from his 1953 speech in the courtroom (“History will absolve me”) to his 2016 column in Granma (“The Uncertain Fate of the Human Species”). What defined Castro’s great international contribution is not only his leadership of the Cuban Revolution, which was considerable, but his role as the great teacher for the Third World of the terrible violence of imperialism and capitalism, which manifested itself in hunger and environmental desolation, war and the grip of profit. Castro’s voice was sharp, but it was not his voice alone. It was the voice of the Third World, a voice that constantly checked to see if it was not moving away from the pulse of hope. When Fidel addressed the vast crowd in Havana in 1959, he turned to his closest comrade Camilo Cienfuegos and asked, ¿Voy bien, Camilo?; Camilo, who died tragically in a plane crash a few months later, responded, Vas bien, Fidel. You’re doing fine, Fidel, your words and legacy are inspired wisdom for us.