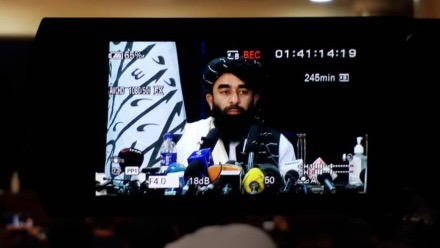 Two days after their capture of Kabul, the Taliban tried to convey the message to Afghans and the world that it has changed and should not be compared with its earlier avatar of the late 1990s. In a press conference on Tuesday, August 17, Taliban spokesperson Zabihullah Mujahid said that the group wants the end of the war in Afghanistan and therefore is looking to create an inclusive government in the country soon.

Mujahid also said that the Taliban is committed to provide women their rights in accordance with Islam and that there will be no discrimination against them. Despite his assurances, people in Afghanistan and elsewhere have expressed skepticism about the motives of the Taliban.

In the press conference, Mujahid emphasized that the group’s ideology and beliefs are the same as in the 1990s but it has gained experience in the last 20 years and developed a new perspective.

Mujahid claimed that there is improved security in Kabul as the confusion of the first day has been resolved. He also said that the Taliban has issued a general amnesty and no one who has worked with previous governments or foreign countries would be punished or have their houses searched.

He guaranteed that Afghanistan’s image as a hub of poppy cultivation and drug trade will change, for which the Taliban will seek international cooperation.

Mujahid also gave the assurance that the media in the country will be allowed to function independently if they remain impartial and careful about national interest and the values of Islam.

Despite the assurances and claims of change by the Taliban, several Afghans expressed their apprehensions. Some even called Tuesday’s press conference an act of attempted “propaganda” to distract the world from the real developments on the ground.

Taliban are using propaganda to have us busy refuting whether or not they have "changed". This is a way for them to distract us from their horrific track record on war crimes and human rights abuses. We are being prisoners of the present.

Muska Dastageer, who teaches at American University of Afghanistan, claimed on Twitter that Taliban fighters are still undertaking house-to-house searches for people who have worked with previous governments. Dastageer asked the Taliban to stop this, saying “your public messaging is giving people hope amid intense fear: please honor the hope.”

Accounts of Taliban fighters with lists looking to track down government functionaries and others. Taliban needs to do everything they can to stop this and hold the responsible ones accountable. Your public messaging is giving people hope amid intense fear: please honor that hope

Some women questioned the speculation regarding Taliban’s changed approach following Tuesday’s press conference. They claimed that in areas under Taliban control, the condition of women has remained the same as before 2001.

Thank you for posting @MaryamNemazee
I'm not guessing anything I say. None of the Taliban's behaviour is new except "best behavior". While I lived in Afg there were areas controlled by them (not at any point in 20yrs were we free of them) and they were atrocious the whole time. https://t.co/GM0QqypQmV

Different videos circulated on social media on Tuesday showing small numbers of women demonstrating at different places inside Kabul, demanding protection of their rights from the Taliban.

Women are protesting for their rights against the Taliban in front of the ARG palace in Kabul.#WomenPower
Video: Maryam Sama pic.twitter.com/XHdFucbGuU

Tolo news reported that life in Kabul has not returned to normal even after two days of the Taliban takeover as people are fearful and apprehensive about its motives. It also reported that Kabul airport remained crowded on Tuesday with people trying to leave the country.

Several media organizations reported on Wednesday that the Joe Biden administration has decided to freeze all Afghan government assets in the US to prevent the Taliban from using them. According to a report in The Washington Post, Afghanistan has billions of dollars worth of assets in the US. An unnamed government official was quoted by The Washington Post on Tuesday saying that “any central bank assets the Afghan government have in the U.S. will not be available to the Taliban.” The US government has refused to confirm the report yet.

Evacuations of foreign nationals and embassy staff from Afghanistan continued on Tuesday. Countries such as France, Germany and India evacuated their embassies. India shut down its embassy with complete withdrawal of all its staff. All the evacuations were assisted by the Taliban forces.

Australia bans Hezbollah in totality, designates it a “terrorist organization”