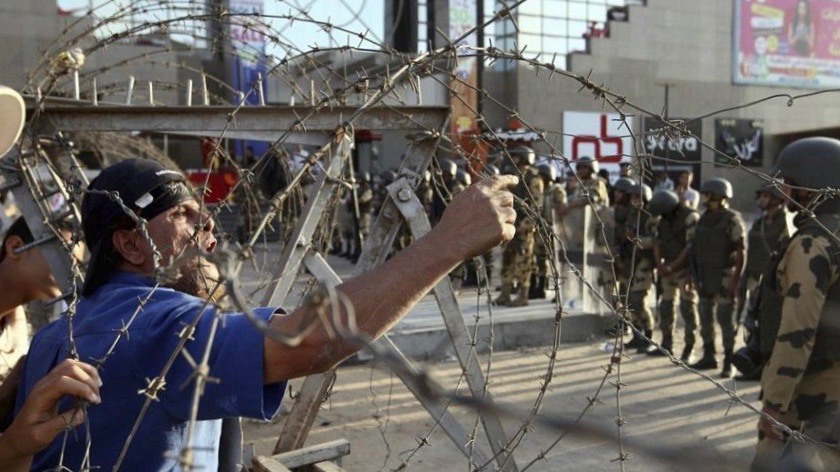 Amnesty’s warning follows recent similar statements by a large number of international and Egyptian human rights and civil society groups that have expressed grave concern over the Egyptian government’s systematic crackdown on civil liberties and the widespread human rights abuses against critics, dissenters and those who oppose the government’s policies and actions.

Accompanying its statement, Amnesty gave recent examples of videos posted by the Egyptian military of soldiers committing blatant extrajudicial acts of murder, such as shooting a man sleeping in a tent to death. Another video showed soldiers shooting an unarmed man who was running across the desert from above, leading to his death. Amnesty stated that the weapons used to kill the two men were US-made. This was in clear violation of the human rights conditions necessary for receiving such sophisticated and deadly arms from the US. The conditions forbid the use of these arms for human rights violations, extrajudicial executions, civilian killings, and other such abuses.

Over the years, human rights groups have documented the widespread persecution and human rights abuses taking place in Egypt under the rule of president Abdel Fattah el-Sisi, who came to power after a military coup, supported by the US and the West, against the first democratically elected president of Egypt, Mohammed Morsi, in 2013. Since then, his regime has presided over the illegal detention of more than 60,000 political prisoners, according to data from Human Rights Watch (HRW).

The Sisi regime has embarked on a massive campaign of arrests, resulting in prolonged periods of detention for several independent journalists, human rights activists, lawyers, writers, and others who have criticized government corruption, authoritarianism and misgovernance, and demanded a return to democracy and respect for human rights. The country has also seen an alarming uptick in the number of death penalty sentences being carried out, with the number of executions increasing three-fold last year. This has resulted in Egypt being ranked third on the list of countries carrying out the most executions in the world.

A number of US congressmen and senators have also urged the administration of president Joe Biden to withhold military aid to Egypt and cut significant portions of it due to the serious human rights violations by the Egyptian government. In spite of the repeated protestations and appeals from various organizations and politicians, the Biden administration approved the sale of arms worth $200 million to Egypt in February this year, even as the Egyptian government was being heavily criticized worldwide for its continued threats and persecution against Egyptian-American activist Mohammed Soltan and his family. Many of Soltan’s relatives were arrested in Egypt as a form of reprisal against him. He is currently living in the US after being freed from an Egyptian prison in 2015. Biden’s approval was in stark contrast to what he had claimed during his presidential campaign, when he had announced that there will be no more “blank cheques” for the Egyptian government.

According to a statement by Amnesty’s advocacy director for Middle East and North Africa, Philippe Nassif, in the beginning of this week, “waiving the congressionally-imposed restriction would provide a green light for President Sisi’s increasing crackdowns on Egyptians and further implicates the US in abhorrent human rights abuses. Unconditionally backing Egypt’s security forces contradicts President Biden and Secretary of State Blinken’s stated commitments to center human rights.”

US detention of Afghan man at Guantanamo is illegal, says court