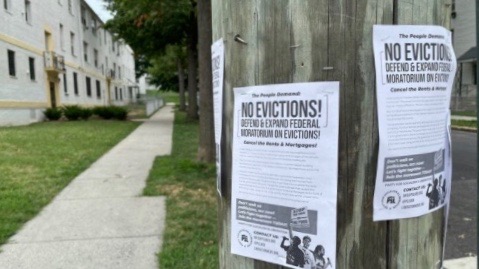 Flyers put during a Cancel The Rents campaign against evictions in Washington DC. (Photo: Zeb Habash/Twitter)

The United States supreme court on Thursday, August 26, struck down the latest federal eviction moratorium put in place by the administration of president Joe Biden. In a 6-3 decision, the conservative supermajority in the supreme court stated that if a federal eviction ban is to continue, the congress must authorize it.

“The Congress was on notice that a further extension would almost surely require new legislation, yet it failed to act in the several weeks leading up to the moratorium’s expiration,” the apex court’s ruling stated. “If a federally imposed eviction moratorium is to continue, Congress must specifically authorize it,” it added, putting the onus back on the congress.

The three dissenting judges in the ruling argued that the ongoing surge in COVID-19 cases should have been taken into account. The judges also criticized the court’s decision to pass the ruling under the emergency docket, often called the “shadow docket”, which requires very little hearing and briefing before reaching a decision. They argued that the answers to the questions raised by the lawsuit “impact the health of millions.”

The court ruling came in a federal lawsuit filed by landlords and realtors groups, like the Alabama Association of Realtors. Landlords have long opposed the moratorium extensions and rent cancellations, and have claimed that the new eviction ban was an attempt at “gamesmanship” by the Biden administration.

The conditional eviction ban was put in place earlier this month on August 3, days after the congress failed to extend the 11-month-long comprehensive moratorium placed by the Centers for Disease Control and Prevention (CDC), before it expired on July 31. The reason behind the new moratorium was the recent surge in COVID-19 cases and it was set to expire on October 3.

The housing rights movement has highlighted that challenging the moratorium threatens millions of people with evictions during the pandemic. The US is currently witnessing one of its steepest surges in COVID-19 transmission with the onslaught of the Delta variant, the current seven-day average being upwards of 150,000 cases daily.

They also pointed out that close to USD 46.5 billion have been earmarked by the US congress in rent relief. Since this would directly go to compensate landlords, doing away with CDC moratorium was unnecessary.

The Democratic Party, which holds a slight majority in both the houses of the Congress, blamed the failure to extend the earlier CDC moratorium on the opposition Republican Party which had blocked a bid to pass a unanimous bill to that effect.

But progressive Democrats have criticized the Biden administration and the party leadership for failing to act on time, especially after speaker Nancy Pelosi adjourned the House of Representatives for a six-week vacation.

After nearly five days of protest led by congresswoman Cori Bush, along with other progressive colleagues and several social movements outside the congress, the Biden administration was forced to impose the latest limited eviction ban through the CDC.

The new moratorium, while limited, covered over 80% of the US counties and nearly 90% of the population. According to estimates, at least 6.5 million households, consisting of nearly 15 million people, are behind on their rents. Of these, at least 3.6 million are under threat of being evicted immediately without government assistance.

Calling the court ruling “partisan”, Cori Bush tweeted, “If they think this partisan ruling is going to stop us from fighting to keep people housed, they’re wrong.” She asked the congress to convene immediately to resolve the looming evictions crisis. Bush, who was once homeless as a single mother, has been the most prominent voice calling for eviction bans and rent cancellation in the congress.

Nationwide housing rights movement Cancel The Rents has also come out strongly against the ruling and the hasty manner in which it was passed. “Late Thursday evening, the Supreme Court attempts to bury their decision that evicts millions,” they tweeted. “The people’s demand remains: We must keep an eviction moratorium in place, and Cancel The Rents and mortgages for all families struggling in the middle of a pandemic.”

Cancel The Rents will be holding a flash protest outside the supreme court on Friday, August 27. The movement also intends to mobilize nationwide support to demand for a federal eviction moratorium and rent cancellation. They will be joined by the Party for Socialism and Liberation (PSL), along with other social movements in the US, responding to the protest call.