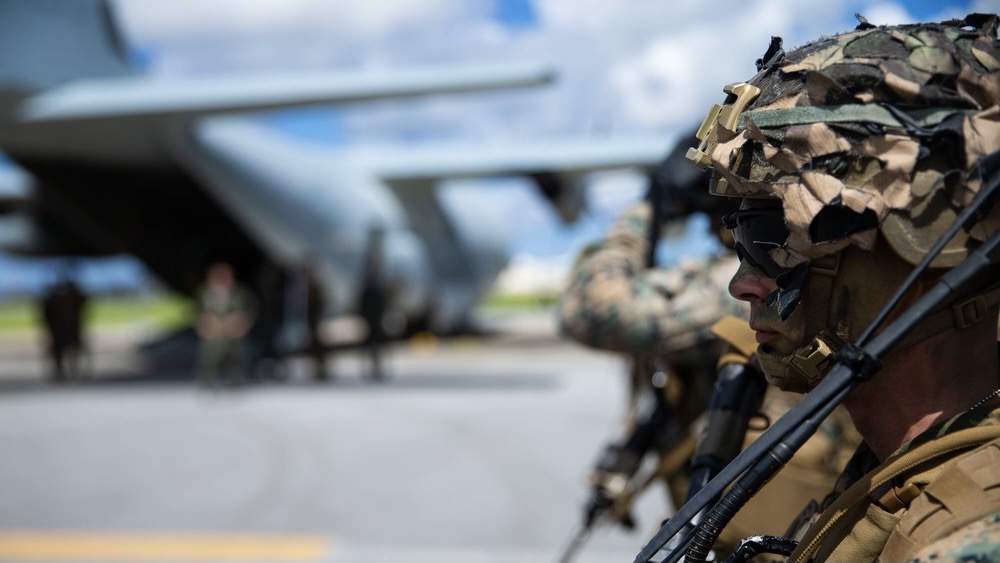 US soldier in Japan. The Anti-China campaign has not only been rhetorical. The last couple of years have seen the strengthening of US bases in the Indo Pacific Command and deployment of war ships in the South China Sea. As well as joint exercises with regional allies like Japan, India, Australia, etc. Photo: US Indo Pacific Command

On May 26, 2021, President Joe Biden ordered US intelligence agencies to produce “analysis of the origins of COVID-19” within 90 days. This move followed weeks of speculation surrounding the claim that the virus had escaped from a Chinese laboratory, usually identified as the Wuhan Institute of Virology. Having rightly rejected this claim for more than a year as a Trumpian conspiracy theory, centrist and liberal commentators in the West have breathed new life into the “lab leak” hypothesis, taking cues from allegations and claims made by US state leaders and corporate media. Meanwhile, Facebook and other social media giants reversed their censorship of lab-leak disinformation almost overnight, impelled by a tawdry mix of insinuations from unnamed US intelligence sources and vague allegations of impropriety relating to the World Health Organization’s investigation into the origins of the pandemic earlier this year.

Right on schedule, the nation’s finest intelligence analysts delivered their report to the White House on August 24 and released an unclassified summary three days later. The once hotly anticipated story landed like a damp squib and was buried by the regular news cycle in less than a day. In part, this was due to the inconclusive nature of the findings: four intelligence community (IC) elements and the National Intelligence Council assessed “with low confidence” that SARS-CoV-2 emerged from “natural exposure,” another IC element leaned “with moderate confidence” toward lab leak, and three others did not commit either way, though they naturally all agreed that “Beijing… continues to hinder the global investigation, resist sharing information and blame other countries, including the United States.” But what really doomed the report to oblivion was a signal failure of US intelligence—and the entire imperial apparatus—on a far grander scale: the utter rout of the United States’ puppet regime in Afghanistan by the Taliban, who in 10 days captured every provincial capital (save one), including Kabul.

One underexplored throughline linking both events is Biden’s fraught though largely earnest attempts to restore the traditionally multilateral basis of the US empire, drawing a sharp distinction with his predecessor Donald Trump. While Trump dramatically withdrew the United States from the WHO at the height of a global pandemic in 2020, alleging an entirely illusory pro-China bias, one of Biden’s first acts in office was to rejoin the organization. WHO Director-General Tedros Adhanom Ghebreyesus duly celebrated the restoration of US funding by contradicting the WHO mission’s own assessment, as part of a joint study with China, that “introduction through a laboratory incident was considered to be an extremely unlikely pathway.”

Biden’s penchant for pursuing the new cold war through multilateral channels has continued in his engagement with the G7 and NATO. Trump famously denigrated both forums and delighted in alienating the United States’ sub-imperial vassals. Biden has, meanwhile, used these summits to great effect as ostensibly internationalist window dressing for the military encirclement of China. In June, a NATO Brussels Summit Communiqué for the first time identified “China’s stated ambitions and assertive behaviour” as “systemic challenges to the rules-based international order and to areas relevant to Alliance security.” In the months since, Britain, France, and even Germany have launched performative naval incursions into the South China Sea—almost the antipodal opposite of the alliance’s ostensible remit in the North Atlantic.

Biden and the Democrats’ response to the domestic surge in anti-Asian racism, effectively delinking it rhetorically from their imperial aggression against China, has followed a similar logic. Gone are the days of presidential bombast over the “China virus” and the “Kung Flu.” Instead, after the Atlanta spa shootings of March 16, the Democrats worked overtime to identify Trump and his loyalists as the unique locus of violent anti-Asian animus. They extended the promise of full inclusion into American society and protection from isolated acts of vigilante terror—a promise somehow underwritten by a violently racist policing system and conditioned on mawkish displays of loyalty to the imperial project. The United States’ selective incorporation of the Asian and particularly Chinese diaspora, in exchange for Asian Americans’ active collusion in the relentless demonization by the United States of their countries of origin, has ample historical precedent. That Biden signed the (predictably hyper-carceral) COVID-19 Hate Crimes Act on May 20, 2021, mere days before ordering his intelligence apparatus to fan the flames of sinophobic hate by promoting the lab-leak myth, is testament to the inestimable hypocrisy of liberal “anti-racism.”

No figure in the Biden administration so thoroughly embodies the hollowness of such politics as Kamala Harris, an infamously vindictive ex-prosecutor now feted as the first Black and Asian vice president. Coincidentally or not, she too found herself playing an awkwardly timed bit part in the hybrid war on China as her government’s imperial designs in Afghanistan hurtled to their ignoble denouement. While the humbled US military shambolically evacuated the one remaining piece of Afghan territory it controlled after a 20-year war—making sure to commit some parting war crimes for long-suffering civilians to remember it by—Harris was tasked with enlisting Singapore and Vietnam into the United States’ machinations in the South China Sea. Vietnam at least did not take the bait, instead reaffirming its historic ties to the People’s Republic of China as a fellow socialist state.

All that said, the most spectacular failure of the United States’ return to traditional alliance structures is undoubtedly the Afghanistan withdrawal itself. The irony is inescapable: Joe Biden, who staked so much on multilateralism and a clean reputational break with his predecessor, has infuriated his “coalition partners” by honoring Trump’s unilateral commitment to end 20 years of brutal military occupation. Extraordinarily, the United States has arm-twisted its Western allies into accepting the unmitigated defeat of a common imperial project, which it initiated, gravely harming its relations with its allies in the process.

Already, of course, the US and its allies are undermining the prospects for lasting peace by threatening the new Afghan government with debilitating sanctions and fearmongering about a new “Taliban-Pakistan-China” axis. This confluence of events has not gone unnoticed in China, where Foreign Minister Wang Yi pointedly urged the US to “work with the international community to provide Afghanistan with urgently-needed economic, livelihood, and humanitarian assistance” while condemning “the so-called investigation report on COVID-19 origins produced by the US intelligence community” on a call with US Secretary of State Antony Blinken.

In the fevered imaginations of US war planners and their media sycophants, the empire’s greatest ideological, civilizational, and racial enemies of the last century—communism, Islamist jihadism, and a rising China—seem to be fusing into one. Hopefully, recent events have taught the United States’ prospective partners to think twice before following them once more unto the breach.

Charles Xu is a member of the Qiao Collective and of the No Cold War collective.

Are Western wealthy countries determined to starve the people of Afghanistan?
RECENT ARTICLES