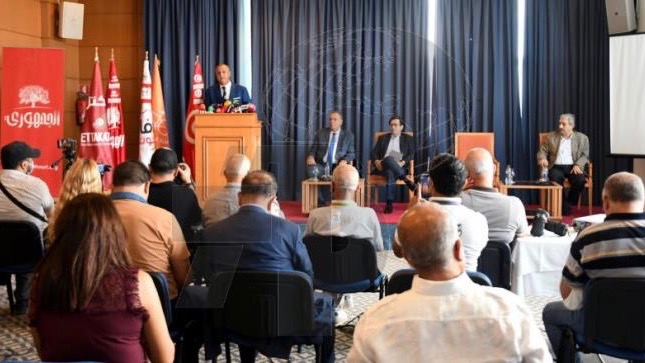 Four political parties in Tunisia announced the formation of a coalition to oppose president Kais Saied’s series of actions since July to seize legislative and executive power in the country. In a press conference in capital Tunis on Tuesday, September 28, the four parties, Democratic Current, Ettakatol (FDTL), Republican Party and Afek Tounes, announced their participation in the bloc to work towards restoring governance according to the constitution and to ensure that power is not monopolized by the president. The announcement comes barely a week after president Kais Saied issued decree 117 allowing him to ignore parts of the constitution and enact legislation through decrees. He had previously suspended the constitution in July using Article 80, dismissed the prime minister along with the entire cabinet, and suspended the parliament, among various other measures.

The secretary-general of the Democratic Current party, Ghazi Chawashi, was quoted by news reports as saying, “if the president persists in his position, we will opt for any form of possible mobilization to defend democracy and the achievements of the revolution.” He added that if the president “insists on his decisions,” their bloc would “exercise all peaceful means of protest” to exert pressure on him to end the current political crisis and revert to governance in line with the constitution.

Republican party’s Issam Chebbi seconded this view, accusing the president of “exploiting Tunisia’s multiple crises to grab power,” adding “we totally reject this and call on him to reverse his decisions.” Fadhel Abdelkefi of the Afek Tounes party warned that political instability and uncertainty in the country could have significantly damaging effects on the already struggling Tunisian economy and increase the suffering of the ordinary people.

The president had used the poor performance of the economy as the main pretext for justifying his actions in July and had promised to bring change, especially in regard to healthcare and the government’s response to the ongoing COVID-19 pandemic. However, in the four months that have passed since, no measures or reforms have been announced by the president to address the wide range of social and economic issues plaguing the country, including corruption, unemployment, government debt and healthcare. Instead, he has enacted new rules and measures to consolidate his hold on power, which many have termed as unconstitutional and a “presidential coup” to take the country back to authoritarian, dictatorial one-man rule, reminiscent of the years prior to the Tunisian revolution of 2011.

Opposition to the president’s actions has been steadily increasing over the last couple of months. Four other smaller political parties as well as the country’s biggest labor organization, the Tunisian General Labor Union (UGTT), last week condemned the president’s actions and warned against the dangers they pose to democracy in Tunisia. They demanded an immediate revocation of the measures and the swift formation of a government with full powers as per the constitution. The weekend also witnessed protests in Tunis opposing the president’s moves. Protesters raised slogans accusing him of attempting to rewrite the constitution. They also demanded the immediate reinstatement of the parliament or fresh elections as soon as possible.

President Saied is also facing international pressure and criticism for his actions. 20 human rights organizations from around the world on Tuesday issued a joint statement saying that they “”strongly denounce the decisions taken unilaterally by President Kais Saied, reaffirm their unwavering attachment to democratic principles and condemn the seizure of power and the lack of any form of safeguards.” The statement added that the president’s actions are “implicitly abrogating the constitutional order in… a first step towards authoritarianism.”

The signatories included Amnesty International, Human Rights Watch, International Commission of Jurists, and the Tunisian Network for Transitional Justice. Referring to the political and socio-economic reforms which the president seeks to implement, the groups said that according to the current political system in the country, any reforms must be undertaken while respecting “the separation of powers and in full guarantee of fundamental freedoms and human rights,” and not “dictated unilaterally by the presidential power.”

In another related development, Middle East Eye reported that a number of members of the US House of Representatives in a letter asked the US government to clarify whether president Saied’s actions constitute a coup or not, and called for taking “”stronger diplomatic steps” in response to the political crisis in Tunisia.

The US has sent billions of dollars in financial aid to Tunisia since the 2011 revolution, of which USD 685 million from the United States Agency for International Development (USAID) was meant for economic and infrastructure development and a nearly equal amount was for military and security assistance. The Biden administration has so far not declared president Saied’s actions as a “coup.” This is possibly because doing so would also mean an end to US financial assistance to Tunisia, something which several human rights groups such as the Project on Middle East Democracy (POMED) have been calling for in order to bring a change in the Tunisian president’s behavior. However, several analysts and commentators have expressed concern that withholding financial aid to Tunisia at a time when the country is going through an extremely precarious economic and healthcare crisis would further result in chaos and instability.