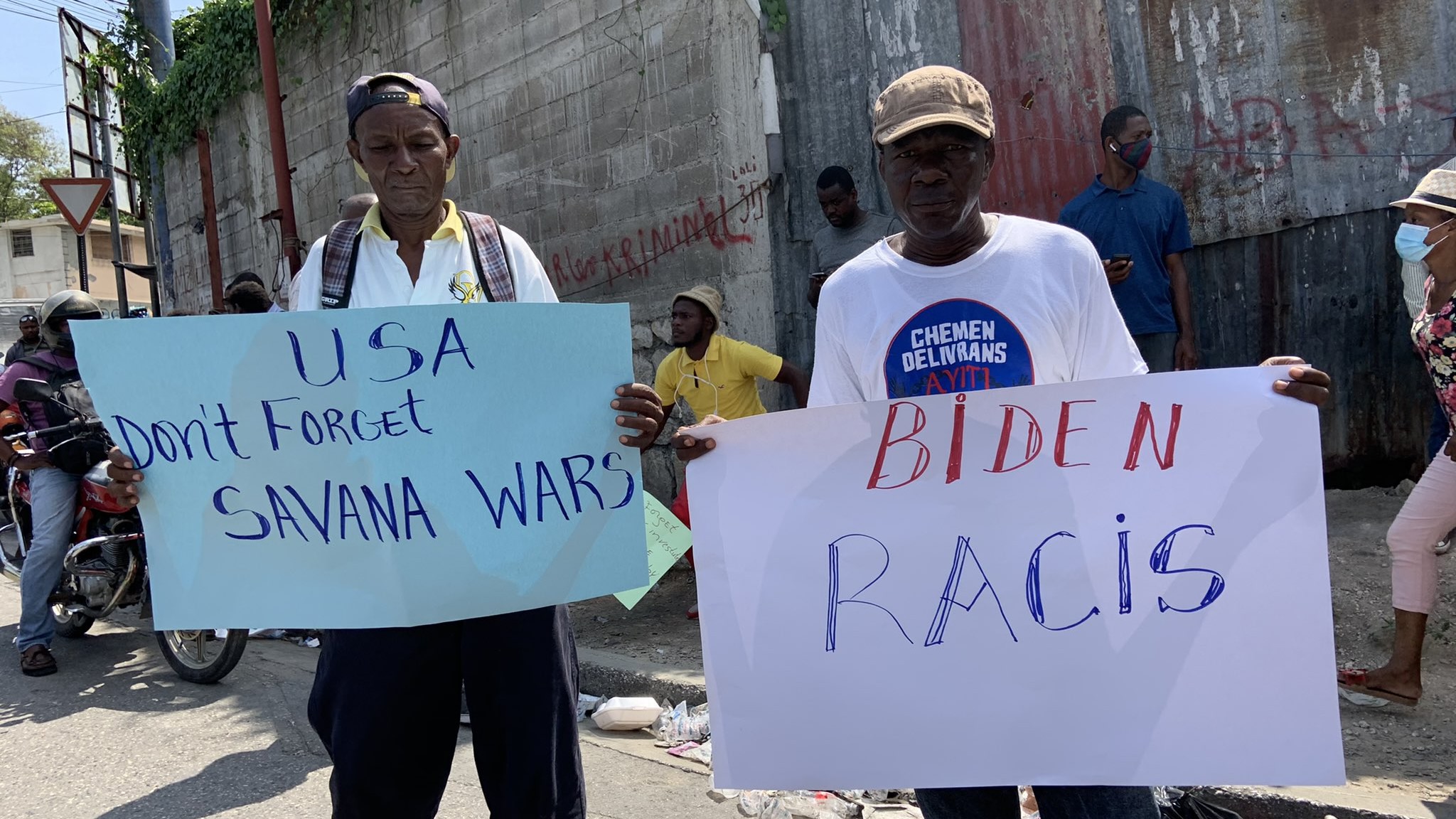 Haitians protest in Port-au-Prince against the racist crackdown on migrants and mass deportations taking place under US president Joe Biden.

The administration of US president Joe Biden has attracted widespread backlash over its recent treatment of Haitian asylum seekers, exposing its record so far. Last week on September 19, the United States began a massive deportation campaign of anywhere between 12,000 to 15,000 asylum seekers and undocumented migrants in a refugee camp at the border town of Del Rio in the southern state of Texas.

The deportation included violent forced evictions by the mounted forces from the US Customs and Border Protection, in what a People’s World report noted could be “one of the largest, fastest, most abrupt mass expulsions of refugees in modern US history.”

The forces were also sent to block any new migrants and asylum seekers from crossing the US-Mexico border as a humanitarian crisis unfolded in Haiti. The recent move to block and deport Haitian asylum seekers is being made in response to a growing migrant crisis that has hit the US.

At least 8,000 of these were processed and deported to Mexico, while as of September 28, 4,632 people were deported back to highly unstable conditions in Haiti. As images of the violence in Del Rio spread and with witnesses reporting whipping and other forms of disproportionate violence by the border control personnel, condemnations and outrage poured in from across the country and the world.

Within days, as the first batch of migrants processed for deportations reached Haiti, the Biden-appointed US special envoy to Haiti, Daniel Foote, resigned on September 22, strongly opposing the deportations as “inhumane, counterproductive.” Foote also stated that the US “policy approach to Haiti remains deeply flawed.”

According to the United Nations Children’s Fund (UNICEF) estimate, two-thirds of those deported back to Haiti were either women or children. “Haiti is reeling from the triple tragedy of natural disasters, gang violence and the COVID-19 pandemic,” said Henrietta Fore, executive director of UNICEF.

“When children and families are sent back without adequate protection, they find themselves even more vulnerable to violence, poverty and displacement – factors that drove them to migrate in the first place,” she stated.

“This inhumane airlift must end immediately,” demanded the Communist Party of the United States of America (CPUSA), in their statement condemning the deportations. Calling the border control officers “notoriously pro-Trump” and the deportation drive as an “ugly racist” incident, the statement added that it was “callous, opportunistic, and at best hypocritical.”

“You cannot stand at the UN making lofty speeches about our shared humanity and “values” while at the same time loading asylum-seeking black Haitians onto hell-bound flights to where they were trying to escape from in the first place,” the CPUSA hit back.

Protests also broke out across the country on September 23, in over 25 cities condemning the deportations and demanding an end to Trump-era immigration laws. The demonstrations, part of the “Communities Not Cage” day of action, was organized by United We Dream, Defund Hate and We Are Home, and supported by workers’ groups like Service Employees International Union (SEIU), the National Domestic Workers Alliance, and the United Farm Workers.

The entire camp was cleared out by September 24, but the US is still bracing for thousands more. At the time of filing this report, at least 16,000 displaced Haitians are reportedly either trying or have made their way through Panama en route to the US.

Many of these asylum seekers who had sought refuge at the Del Rio camp have been displaced during the recent catastrophic Haitian earthquake that killed over 2,000 people. According to reports, over 10,000 asylum seekers had crossed the border into the US since the beginning of September.

Most asylum seekers were immediate victims of the earthquake in mid-August. Still, a combination of factors has precipitated the crisis in Haiti, including the recent assassination of Jovenel Moïse. The crisis, in turn, has created the recent surge of migrants trying to traverse a dangerous migrant trail in Central America.

According to People’s World, many were displaced in previous natural disasters like the 2010 earthquake in Haiti and worked in South American countries like Brazil and Chile under desperate conditions as local opportunities are fast vanishing there.

President Biden has previously been criticized for walking back on campaign promises on migrant rights and asylum seekers. This includes maintaining and reopening migrant child detention centers set up under the Trump administration and continuing to use the Trump-era immigration policy of mass deportations and migrant crackdown.

According to official figures, over 210,000 apprehensions took place under the Biden administration in July alone, the highest monthly figure since 2000. At the same time, the number of apprehensions and expulsions under Title 8 and the Trump-era Title 42 have also increased dramatically under Biden, from around half a million in 2020 to over 700,000 under Biden so far.