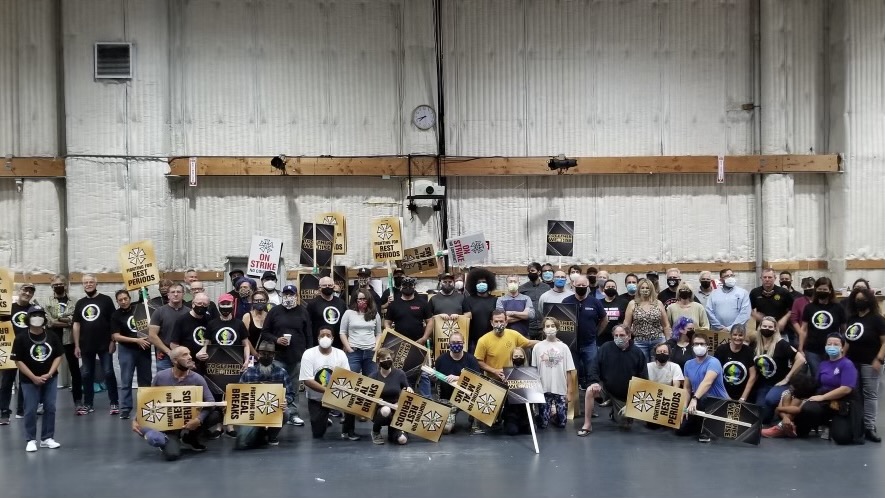 60,000 film and television workers with the International Alliance of Theatrical Stage Employees Tentative (IATSE) are set to go on strike on Monday October 18. Last week, IATSE members at 36 locals across the United States voted to authorize the union president’s call for a strike if a tentative agreement isn’t reached by Sunday evening at midnight PDT. 90% of members participated in the vote, with near-unanimous support for a strike. The strike would put a pause on hundreds of TV and movie productions, from projects currently being filmed to those in post production.

Talks between the IATSE and the Alliance of Motion Picture and Television Producers resumed on Thursday. The union represents workers in the US and Canada. While it is unclear whether the strike will happen or not, locals are busy organizing picket line teams and making signs.

Marisa Shipley, Vice President of IATSE Local 871, reflecting on the workers’ demands said, “We’re talking about reasonable rest and breaks during the workday, having an actual meal in the middle of the day. We’re talking about living wages for the members who make the least sustainable benefits like health care and retirement security and a fair share of streaming success.” She added, “these corporations are not experimental and they’re not a new model. They are well-established and making plenty of money.”

Thirteen locals in the West Coast sent an update to members on Wednesday, saying they had received reports that employers were scheduling work days and extra overtime, in what looks like an attempt by producers to get as much work done as possible before the strike is set to begin. The workers represented by IATSE who will participate in the strike include camera operators, sound technicians, set designers, cinematographers, wardrobe, makeup artists and others.

Rhianna Shaheen, a member of Local 871 commented on the organizing efforts of the union, “We’ve really been driven…We’ve been making sacrifices just to get the word out about the vote and, and just seeing that, I think we’ve felt super strong, together in our unity and solidarity, that we can win this fight. Because when we fight, we win.”