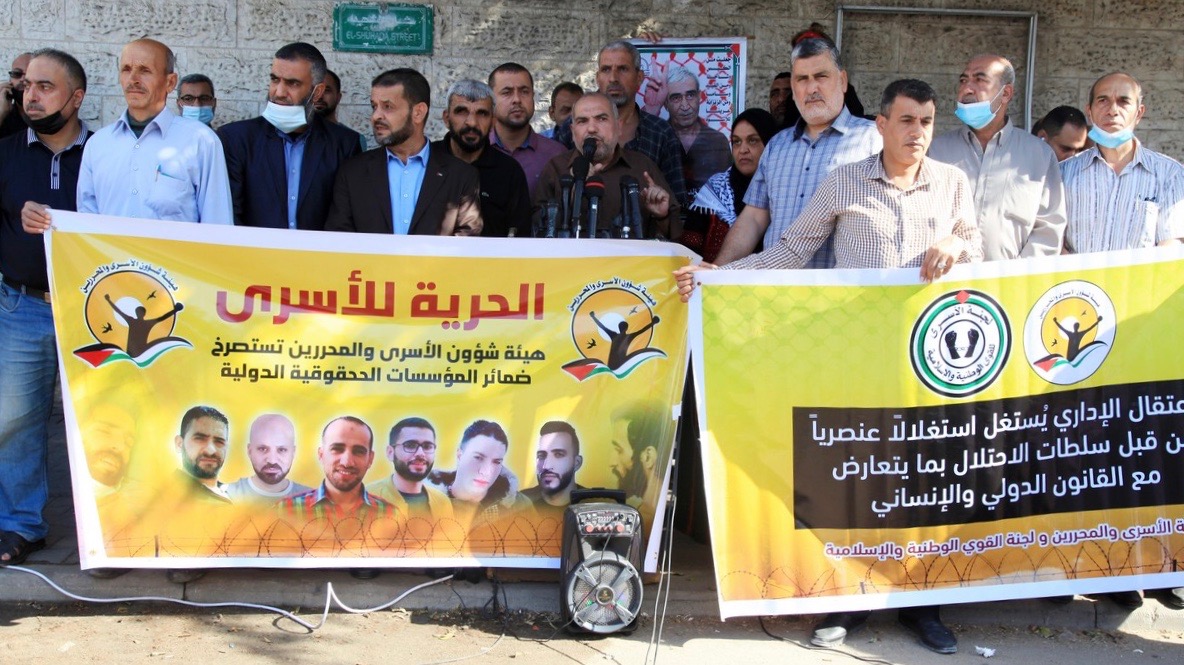 Protest in Gaza in solidarity with prisoners on hunger strike in Israeli jails on October 25. (Photo: Youssef Abu Watfa/ApaImages)

Palestinians in Gaza staged a protest on Monday, October 25, to express solidarity with the seven prisoners on hunger strike to protest their illegal administrative detention by Israel, reported Al Jazeera. The sit-in protest, organized by the Palestinian Detainees’ Commission, was held in front of the headquarters of the International Red Cross Committee. The protesters shouted slogans calling for the release of the seven prisoners. They raised posters reading “Administrative Detention is a crime” and “Stop Administrative Detention.” A similar protest in solidarity with the prisoners was held last week in Ramallah in the occupied West Bank.

The head of the Detainees Affairs Committee in Gaza, Hassan Qantia, told Al Jazeera that “The hunger striking prisoners are in a serious health condition and some of them are at imminent risk of death. The world is standing idly by in front of Israeli violations against Palestinian prisoners.”

The seven prisoners on hunger strike are Kayed Fasfous, Miqdad Qawsmeh, Alaa al-Araj, Hisham Abu Hawwash, Shadi Abu Aker, Ayyad al-Hraimi and Rateb Harebat, and have been on hunger strike for 103, 94, 79, 70, 62, 31 and 16 days, respectively. Many of them have already been transferred to hospitals and prison clinics due to severe deterioration in their health. Some have been admitted to Intensive Care Units. Their families and lawyers, along with activists, have repeatedly expressed concern about their health and highlighted the fact that some of them are on the verge of death.

Mezhir said the punitive measures imposed on the prisoners following the prison break forced them to go on a mass open-ended hunger strike. He added “the silence of international organizations encourages Israel to accelerate its oppressive measures.”

Roughly 400 prisoners have launched hunger strikes this month across several Israeli prisons. They have demanded that detention conditions be returned to how they were before the prison break.

Some of the punitive measures imposed on the prisoners include forcible transfers in order to separate them, solitary confinement in isolated cells, bans on family visits and canteen access, denial of personal belongings and essential items for daily survival such as warm clothes, pillows, blankets, etc. According to several Palestinian groups, more prisoners will join the mass hunger strike in the coming days if these demands remain unfulfilled. They are also demanding an end to the policy of administrative detention, under which prisoners can be detained indefinitely without charge or trial. There are about 520 Palestinians currently being detained under the administrative detention policy out of a total of 4,650 prisoners, including 200 children and 35 women.