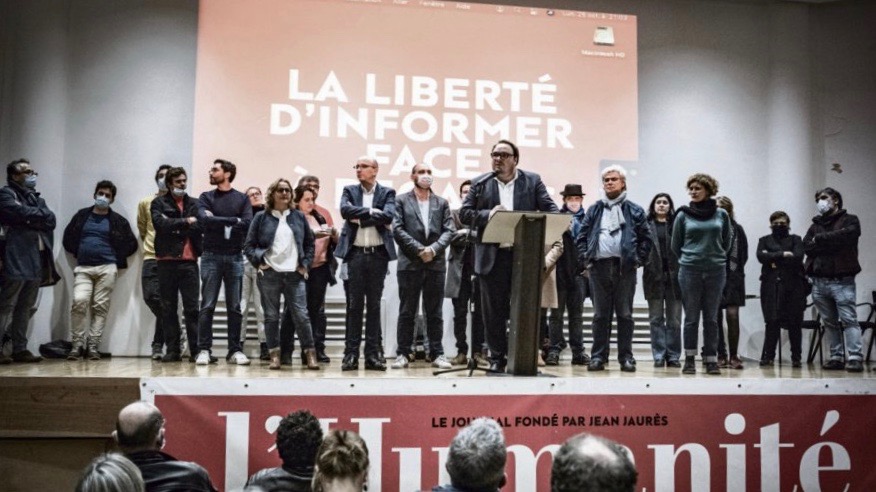 Journalists gather on solidarity with L’ Humanite and other organizations accused of defamation. Photo: L’ Humanite

Progressive sections in France have denounced bids by the Moroccan government to persecute French media outlets by filing lawsuits alleging defamation. On Monday, October 25, a meeting was organized in defense of freedom of the press and against efforts to intimidate the press in Paris. Morocco has filed a lawsuit at the Paris Criminal Court against seven French media outlets, including, L’ Humanite, Mediapart, Le Monde and Radio France, alleging defamation for “accusing Morocco of using the Pegasus software, to spy on journalists, activists and politicians.” The Paris court will decide whether to accept Morocco’s lawsuit against the French media outlets by the first week of December.

A list published by Forbidden Stories, Amnesty International, and a consortium of 17 international media outlets alleged that Morocco may have been involved in snooping on journalists and dissidents using Pegasus, a spyware developed by the Israeli company NSO. The Pegasus spyware was in the news after Citizen’s Lab revealed that it was being used by various governments across the globe to spy on dissidents, human rights activists and journalists through WhatsApp. Those targeted included activists related to the Bhima Koregaon case in India, dissidents in Mexico, Rwanda, Spain and several other countries. In 2018, Edward Snowden claimed that the NSO-made spyware had been used by the killers of Jamal Khashoggi to track him down.

Reports also alleged that many prominent journalists, including Rosa Moussaoui, a reporter with L’Humanite, were under surveillance by Moroccan authorities through Pegasus. Moussaoui had reported extensively on the Moroccan government’s crackdown against the Hirak Rif movement, the Sahrawi freedom movement, and the persecution of investigative journalists Omar Radi and Soulaimane Raissouni, among others.

Read: Pegasus and cyberweapon threats in the age of smartphones

Regarding the lawsuit, Moussaoui said, “This is a frontal attack on the work of journalists because one of the risks we face when investigating difficult terrain, where violations of freedoms and human rights are perpetrated, is the endangerment of our past and present sources. This compromises the possibility of establishing bonds of trust with people who take risks by transmitting sensitive information, it is a very serious obstacle to the exercise of our professions and the freedom of the press.”

Fabein Gay from the directoral board of L’Humanite said that “this legal attack, as outrageous and misplaced as it is, must be taken seriously. It testifies to the relentlessness used by the Moroccan authorities to silence any criticism of it and to hinder the exercise of independent journalism determined to inform citizens of the struggles that are being waged around the world against arbitrariness. It is also a war of attrition, both judicial and financial, that the Moroccan government is waging so that in the end we end up giving in and self-censoring.”

“We will not give in to threats or intimidation. We will continue our work, our investigations, our reports and our revelations. As Jean Jaurès said, “courage is to seek the truth and to say it”; we lack neither courage nor determination,” Gay said.