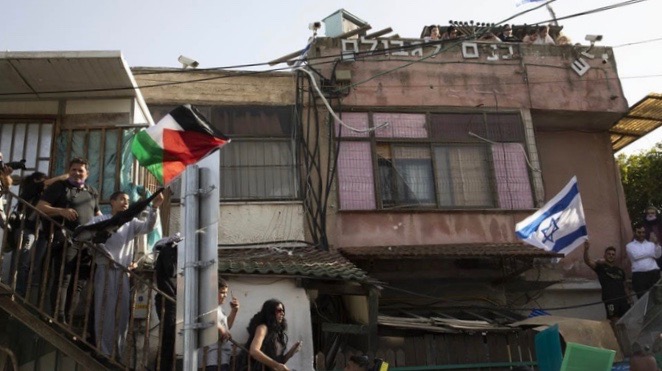 On Tuesday, November 2, Palestinian families of the Sheikh Jarrah neighborhood in occupied East Jerusalem released a joint statement rejecting the ‘compromise proposal’ offered to them by the Israeli supreme court regarding the ownership of their land and homes. The ongoing ‘property dispute’ between the Palestinians living in Sheikh Jarrah and Israeli settler organization Nahalat Shimon company, backed by the Israeli government, has led to the former repeatedly being threatened with illegal forced evictions. The settler organization claims that the land originally belonged to Jews.

The legal case reached the Israeli supreme court, which in a ruling last month offered the Palestinians the status of ‘protected tenants’ by paying a token biennial rent to the settler organization for the next 15 years, effectively recognizing it as the temporary owner of the land. Additionally, the court ruled that the Palestinian families will have to cover the legal and court costs for the settler organization, amounting to approximately 30,000 Israeli Shekels (USD 9,282). The court gave both parties until November 2 to accept its proposal and add any of their own amendments, warning that if the proposal is rejected, it would issue a binding ruling.

In their statement, the four families said, “We rejected the ‘proposal’ by the Israeli Supreme Court, which would have rendered us ‘protected tenants’ at the mercy of settler organizations. We stand firm in our refusal to compromise on our rights despite the lack of institutional guarantees that would protect our presence as Palestinians in occupied Jerusalem. The Israeli judiciary is circumventing its duty to adjudicate the case and is forcing us instead to choose between our own dispossession or submitting to an oppressive agreement. Naturally, we refuse to commit someone else’s crimes.”

Besides the four families, there are close to 30 other families comprising approximately 500 Palestinians in the neighborhood of Sheikh Jarrah who are also facing similar threats of forced expulsions from the Israeli authorities working in tandem with several right-wing, extremist settler groups that want to depopulate the Palestinian-majority areas of occupied East Jerusalem. Activists and human rights groups allege that Israel ultimately wants to ethnically cleanse the area of Palestinians and resettle it with Jewish Israelis to bring about a demographic change and pave the way for the annexation of the entire area in the near future.

The struggle of the Palestinians of Sheikh Jarrah has been consistently highlighted and garnered international attention due to the stiff resistance that the residents have shown against the repeated physical and institutional attempts to expel them from their homes. A global campaign with the online hashtag #SaveSheikhJarrah was recently organized to support the residents and to call upon world governments and international organizations to put pressure on Israel to stop the forced expulsions of Palestinians from their homes and hand over their land to Jewish Israelis, which is also considered a violation of international law.