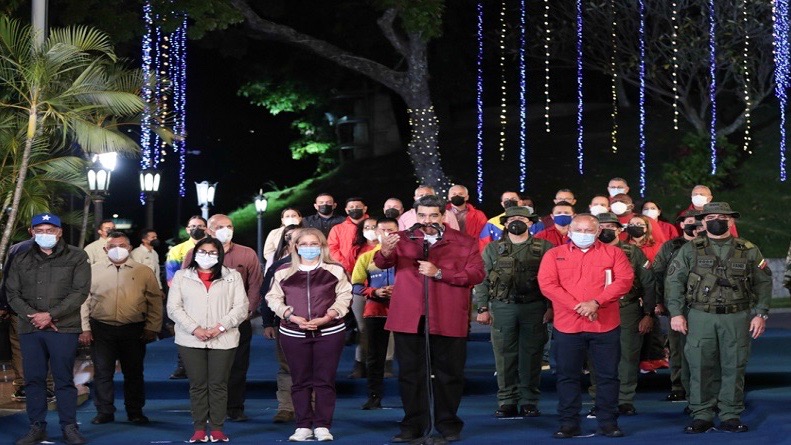 Venezuelan president Nicolás Maduro addressed the nation and thanked the people for their overwhelming support and the resounding electoral victory in the November 21 subnational elections. (Photo: VTV/Twitter)

The Great Patriotic Pole (GPP), led by the ruling United Socialist Party of Venezuela (PSUV) and other Chavista forces, won a resounding victory in the subnational elections held in Venezuela on November 21. The victory of the GPP was widely hailed across the region. According to reports, the GPP won or is leading in 20 of the 23 governorships, and is leading in two others.

Shortly after the first results were announced, Venezuelan president Nicolás Maduro addressed the nation and thanked the people for the overwhelming support. The head of state also called on all political parties and candidates to respect the results, engage in dialogue and work for the well-being of the people.

“Chavismo and Bolivarianism of the 21st century is real, we are standing, we are a determining force in the history of this country and we have to continue learning from the people, rectifying mistakes. The victory is impressive!” he said.

“I reiterate my call to the elected candidates of the opposition, to advance political dialogue and national reunification. I extend my hands to you, to work together, with good will and faith, and build the new prosperity of the people. Dialogue for action!” he later tweeted.

Sunday’s elections were held to elect 23 governors, 335 mayors, 253 regional legislator councilors and more than 2,471 municipal councilors. In the CNE’s first bulletin, only the result for capital Caracas’ Mayor’s Office was announced, in which the ruling party was declared winner. On November 22, in the second bulletin, the CNE announced that the GPP won 205 of the 332 mayoralties counted.

Over 21 million Venezuelans were eligible to vote. CNE president Pedro Calzadilla reported that 42.26% of the voters exercised their voting right.

On November 22, the international observers verified the reliability and transparency of the democratic process.

Héctor Díaz Polanco, representative of the Network of Intellectuals in Defense of Humanity, while presenting the organization’s report on the elections to the media, noted that the elections were “reliable, secure, transparent and democratic.” On behalf of the team, he congratulated “the Venezuelan people on their example of civility, their democratic attitude and the confidence they have in their electoral system, as well as their enthusiasm to go to the polls.”

Similarly, Carlos López López of the Observatory of Latin American Affairs of the Chamber of Deputies of the Argentine Nation, Nicanor Moscoso of the Latin American Council of Electoral Experts (CEELA), Héctor Alemán of the Permanent Conference of Political Parties of Latin America (COPPAL), Vladimir Martínez of the National Lawyers Guild, and Anjuli Tostes of the Brazilian Association of Jurists for Democracy, among others, also ratified that the elections were free and fair.

Social and political leaders from across the Latin American and the Caribbean region congratulated the Venezuelan government for the enormous triumph.

Cuban president Miguel Díaz-Canel was among the first ones to applaud the GPP’s victory. “I congratulate the brave Venezuelan people and the Great Patriotic Pole, led by brother President Nicolás Maduro, for the resounding victory in the regional and municipal elections held in Venezuela,” he tweeted.

Cuban foreign minister Bruno Rodríguez also congratulated the people and the government of Venezuela and said that the results “meant an unequivocal triumph for the Bolivarian and Chavista Revolution.”

Bolivian president Luis Arce also sent his best wishes. “We congratulate the Venezuelan people and their institutions that, once again, bet on overcoming their political differences through democratic means, at the polls, banishing all kinds of foreign interference. We acknowledge the work of the observers who accompanied this process,” tweeted Arce.

Former Bolivian president and the current head of the ruling MAS party in Bolivia, Evo Morales, also felicitated “the Venezuelan people for the great triumph of Chavismo that won 20 of 23 governorships in regional elections. It is the victory of the Bolivarian Revolution of Venezuela with its president Nicolás Maduro before the criminal blockade of the United States and its political operators.”

Nicaraguan president Daniel Ortega and vice-president Rosario Murillo also sent a letter to Venezuela’s head of state congratulating him on the huge victory. In the letter, Ortega and Murillo recognized “the formidable electoral results, a demonstration of the infinite strength of society and its Bolivarian Revolution, expressed in recent hours as the triumph, joy, dignity and courage of the children of Simón Bolívar and Hugo Chavez.”

The leader of the Movement of Allendista Socialism of Chile, Esteban Silva, and the Peronist leader and former Argentine legislator, José Cruz Campagnoli, also sent their greetings.