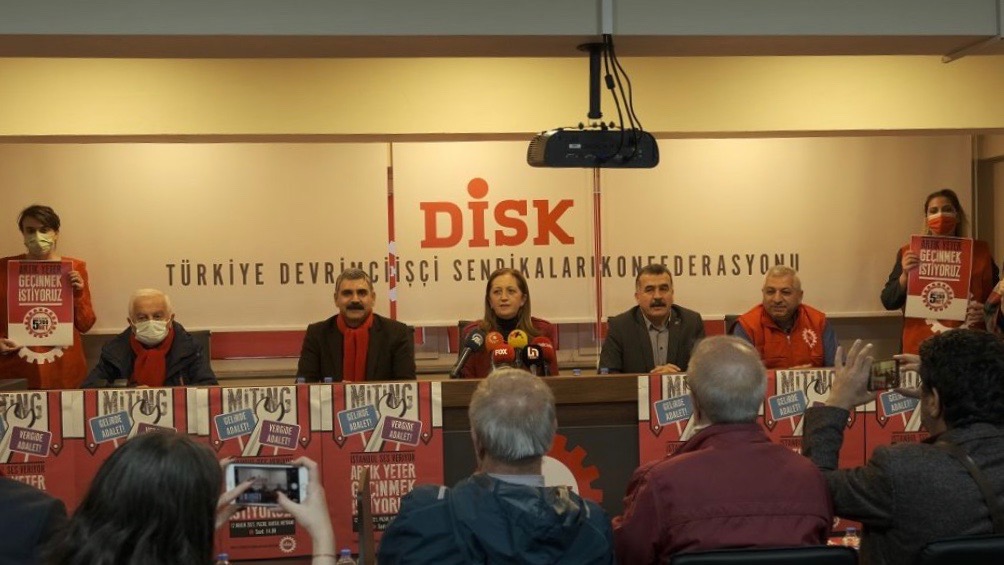 The Confederation of Progressive Trade Unions of Turkey (DiSK) announced on Monday, December 6, that a rally will be organized in Istanbul on December 12 to raise issues affecting the working class in the country, including the demand for a rise in minimum wages, Bianet reported.

Speaking to the press, DiSK chair Arzu Cerkezoglu said that workers in Turkey who contribute towards expanding the economy through their labor are facing grave challenges to make basic ends meet. “We are sick and tired of unemployment, high prices, price increases and bills,” she said. She announced that the December 12 rally will raise the slogan of “Istanbul speaks up: Enough is enough, we want to make a living.”

İstanbul speaks up: Enough is enough, we want to make a living

Cerkezoglu also pointed out that the state has left the workers to deal with the economic crisis and COVID-19-related distress on their own. She noted that the minimum wages in Turkey on average are the lowest among all the European countries and “the wage that the majority of workers have been condemned to earn is even below the starvation line.”

Amidst rising prices and depreciation of the value of Turkish Lira (TRY), DiSK has demanded that the minimum wage in the country be revised from the current 2,800 TRY (USD 204) to 5,200 TRY (USD 380) in order to help the workers live a dignified life.

According to Bianet, Turkey has the highest working hours among all the OECD countries but workers still don’t make enough to fulfil their basic needs. According to a survey published by Bianet in May, the official starvation line for a four-member family (2,825 TRY) is above the minimum wage in the country. According to the Bianet report, Turkey also has the largest number of workers working on minimum wage in Europe, which is the lowest in the last 15 years. Persistent rise in prices of basic commodities has raised the monthly living cost for a single person to 3,435 TRY (USD 252), creating a huge gap with the minimum wage levels.

DiSK, formed in 1961, is a left-leaning trade union confederation in Turkey. It has the third largest membership after Turk-iS and Hak-is with over 3,27,000 active members from different sections of the working classes. Though Turkey has a consultative mechanism for revising the minimum wage every year, it is dominated by pro-government unions such as Turk-iS which often suggest half-hearted changes below the expectations of the working class.