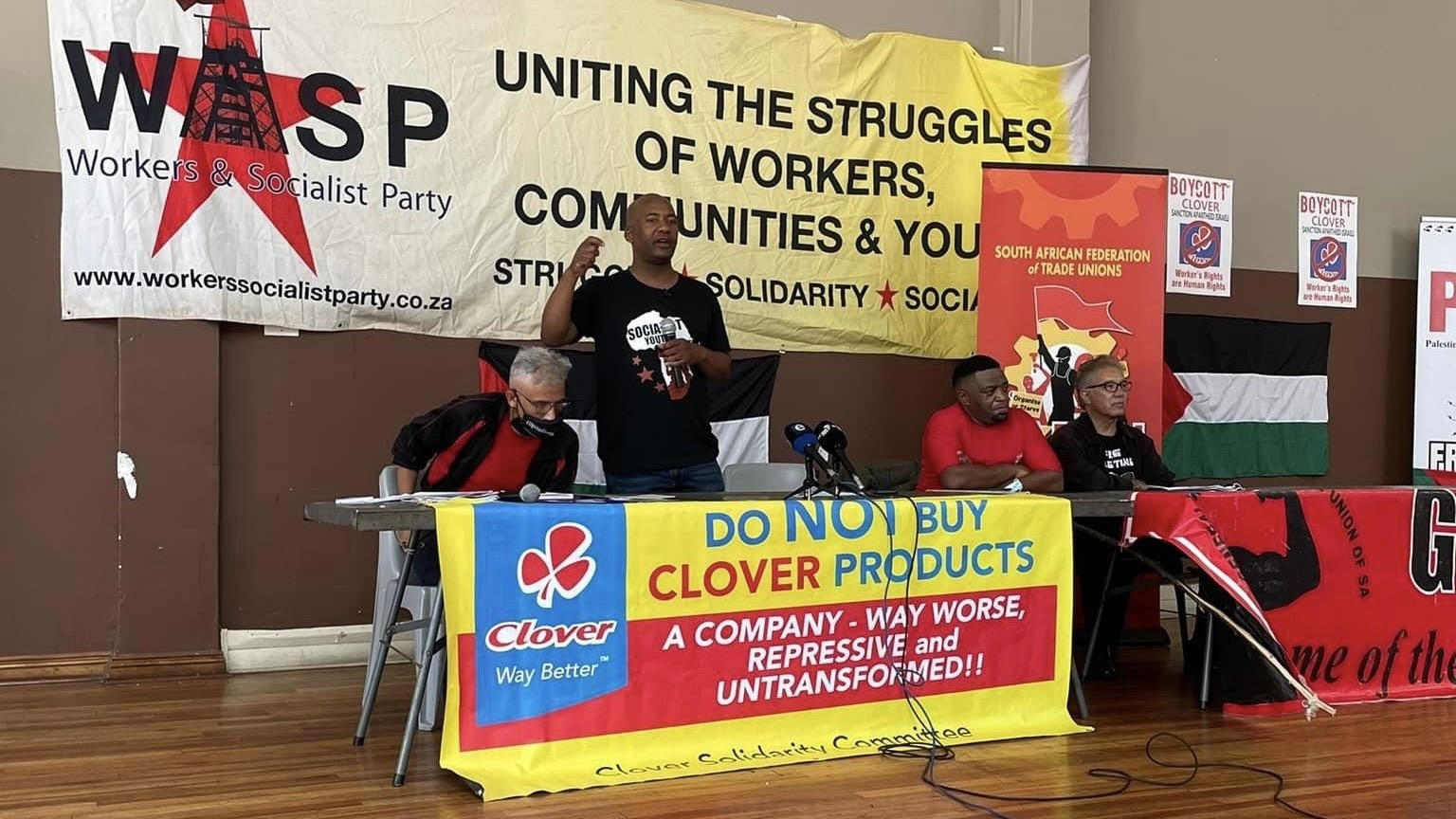 Workers from several organizations and unions held a mass meeting at Cathedral Hall in Johannesburg to discuss a strategy for the ongoing Clover Strike and the way forward. Photo: Workers & Socialist Party

Over a month and a half into the strike action which continues to intensify at South Africa’s largest dairy sector employer, Clover, unions allege petrol bomb attacks have been carried out to intimidate its members.

In a statement on January 11, the General Industries Workers Unions of South Africa (GIWUSA) and the Food and Allied Workers Union (FAWU), which are leading the industrial action by 5,000 Clover workers since November 22, listed a series of attacks that have taken place since January 7.

GIWUSA’s president, Mametlwe Sebei, told Peoples Dispatch that the unions will be filing a complaint to the police, naming the company as responsible for these attacks and threats. “That the company could encourage or use such techniques should not come as a surprise to anyone who knows the background of its owners,” Sebei said, referring to the Israeli Central Bottling Company (CBC). It is the 60% owner of Milco consortium which bought Clover in a controversial merger in 2019.

Opposing the merger, unions and civil society groups at the time had argued that CBC, by operating in illegally occupied territories of Palestine, was in violation of the international law and hence should not be permitted to buy out South Africa’s oldest and largest dairy company. This objection, however, was disregarded by the Competition Tribunal on the grounds that it does not have jurisdiction to consider objections on such grounds.

Unions had also raised objections on the ground that the merger appeared to be a part of a restructuring program that was underway at the time and would result in massive job losses. The merging parties assured the Tribunal not only that no jobs will be shed as a result of the merger, but also that the ongoing retrenchments will be put on hold until October 2022 and 500 new jobs will be created in the meantime.

While the unions were skeptical of these assurances, the Tribunal was convinced and gave a go-ahead for the merger. The retrenchment (Section 189A) notices Clover has recently issued is an outright violation of the conditions on which the Tribunal had permitted the merger, the unions argue.

They have pointed out that the restructuring plan Clover has referred to in these notices will affect 7,382 jobs inside Clover and its subsidiaries. The company is contemplating at least 1,418 job losses.

Over 800 other jobs have already been shed by Clover by forcing workers to opt for Voluntary Severance Packages (VSPs) by relocating their jobs from inland regions to expensive coastal cities where they won’t be able to survive on the wages they earn.

The attacks are “a sign of its growing desperation”

The petrol bomb attacks, GIWUSA’s president pointed out, have come at a time when the company has been unsettled by the victories the unions have recently had in this drawn-out struggle. Earlier this month, on receiving a written complaint by the unions in a meeting on January 4, the Competition Tribunal assured them that it would inquire into their allegations of Clover’s violation of merger conditions.

Less than a week later, on January 10, the Commission for Conciliation, Mediation and Arbitration (CCMA) ruled against Clover and in favor of the unions, ordering the company to pay by January 14 the Christmas bonuses of the striking workers, which it had illegally canceled.

“Since the strike started, the wages have been stopped. By also withholding the Christmas bonus (paid usually in November), the company wanted to make it impossible for the workers to survive on strike. However, we survived December, and now, with the release of the bonuses, workers can afford to continue the strike for another month,” Sebei explained. The CCMA is also expected to soon rule on another dispute raised by the unions regarding allegedly “unfair dismissals” of hundreds of striking workers in December.

Coming amidst these setbacks faced by the company, the attacks are a “sign of its growing desperation”, he argued. “Even in the event that we cannot prove in the court of law that this person from the company paid these individuals to carry out these attacks – because these shadowy deals always happen in the dark – our argument remains that the ultimate responsibility rests at the company’s doorstep.”

“Even if they have not directly ordered the hit – which is a possibility we do not discount – they have created a climate in communities to promote such attacks,” he said.

Community organizations of the poor and unemployed which have historically stood in solidarity with working class organizations, such as the United Front in Gauteng, have allegedly been approached by one Bishop Mabena, promising its members permanent jobs in Clover to replace the striking workers.

“You must see this in the context of this sea of unemployment, which has driven the masses desperate for jobs,” he explained. “By approaching community organizations of poor people with whom we have historically stood in solidarity, with offers to hand over jobs which they know belong to our members, the company is creating fissures.”

Its maneuvers, Sebei alleges, may have led many individuals desperate for jobs to believe that they can curry favor from Clover by undertaking such attacks on striking workers and offering their services as strike-breakers. “So even if the attacks were independent initiatives of strike-breakers, the company remains responsible for creating an atmosphere to entice such acts.”

“The South African Federation of Trade Unions (SAFTU) undertook to mobilize solidarity support, especially from trade union affiliates that are organizing in the workplaces and companies linked to Clover,” said a joint statement by GIWUSA and FAWU on January 9.

“In particular, the National Union of Metalworkers of South Africa (NUMSA) and Transport Action Retail and General Workers Union (THOR) are going to be approached. NUMSA organizes companies supplying packaging materials to Clover, like Nampak and Dairypak; and THOR organizes the retail shops that stock and sell Clover products.”

The Commercial, Catering and Allied Workers Union (SACCAWU) – an affiliate of the ruling ANC’s labor ally, the Congress of South African Trade Unions (COSATU) – has also committed to hold a “meeting with the striking workers to discuss possible solidarity support. SACCAWU organizes major retailers like Shoprite and Pick-n-Pay,” the statement added.

On Thursday, January 13, the striking workers will hold a demonstration outside the Department of Trade, Industry and Competition (DTIC) and march from there to the Union Building in Pretoria.

“They will submit a memorandum of demands calling for divestment of (the CBC-dominated) MILCO (from Clover), reinstatement of Clover workers and for DTIC to intervene in stopping factory closures and retrenchments,” GIWUSA and FAWU said in a statement.

SAFTU’s general secretary, Zwelinzima Vavi, will be joining the workers in Pretoria. A separate demonstration will also be held by striking workers outside Cape Town. Many civil society organizations and progressive movements are expected to join these demonstrations. 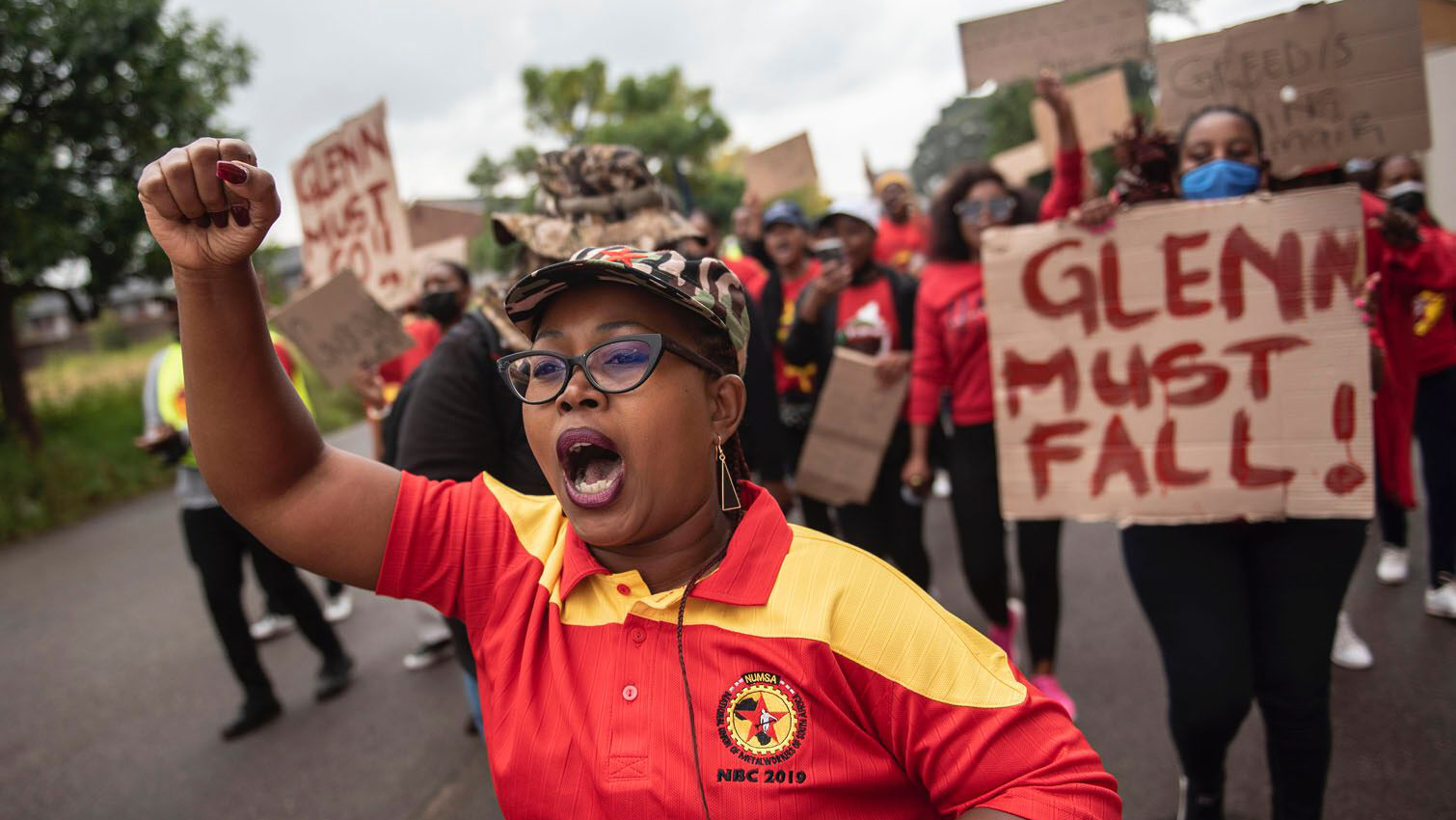