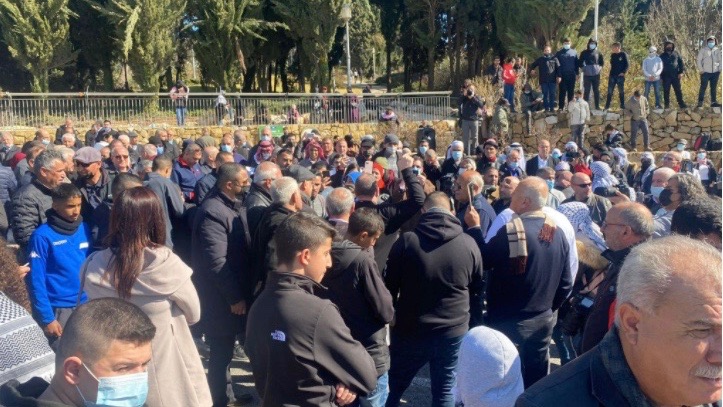 Hundreds of Palestinians gathered in front of the Israeli municipality of Jerusalem on Sunday, January 30, to oppose the ongoing demolition drive targeting Palestinian houses inside the city and in the Al-Naqab (Negev) desert in southern Israel. They also warned of strong resistance in case such acts of ethnic cleansing are not stopped immediately.

The protesters chanted slogans saying “no to ethnic cleansing” and “our homes are our lives” and called the Israeli acts racist. They demanded an immediate end to the demolition of Palestinian houses, Wafa news agency reported.

The protests were called by residents of the Jabal al-Mukaber neighborhood in occupied East Jerusalem who claimed that they had gathered to warn the Israeli authorities against any attempt to carry out demolitions in their locality. A leaflet distributed at the protest site read, “the demolition of our homes kills us and erases our existence. We will remain here and will not leave.”

Israeli authorities had issued demolition notices to some residents in the locality on January 27.

Refusing the demolition of their homes. Residents of Jabal al-Mukaber call for a solidarity on Sunday#Israelterrorist continues its crimes #ETHNIC #Cleansing East Jerusalem and All occupied Palestine where the hell is the @UN ?? Why ignoring these crimes still ?#BDS https://t.co/79gccNNCCJ

Jabal al-Mukaber is a Palestinian neighborhood in the old city with a population of around 20,000. A medical center in the locality was partially demolished by the Israeli authorities in the first week of January this year despite an appeal pending in the court against an earlier demolition order. The demolition process was halted midway due to prompt action by the residents who were able to obtain a stay order. Israeli authorities have carried out similar demolitions in the locality earlier as well, forcing some residents to demolish their own houses.

Israeli authorities, often citing lack of adequate permits, demolish Palestinian houses in the old city and transfer the land to illegal Jewish settlers as a part of their policy of Judaization of the city occupied in 1967 and illegally annexed in 1980.

Palestinians point out that Israeli authorities deliberately deny them authorization. According to rights groups, more than 75% of all applications submitted by Palestinians to build a house or carry out repairs of the existing buildings are either rejected or delayed by the Israeli municipal authorities, which leaves the Palestinians with no other option but to build without authorization or live in dilapidated houses.

According to the Peace Now group which monitors illegal settlements, only 98 applications out of a total of around 4,422 requests filed by Palestinians between 2009 and 2018 were approved by Israel.

Despite large scale protests for almost a year and repeated international appeals against such moves, Israeli authorities demolished a Palestinian home in Sheikh Jarrah earlier this month using force. They also carried out large-scale demolition of Palestinian houses in al-Naqab in the name of afforestation of the area. Israeli forces carried out mass arrests of Palestinians who opposed the drive as a move to build new settlements in the region to displace the people living there before the creation of the state of Israel in 1948.