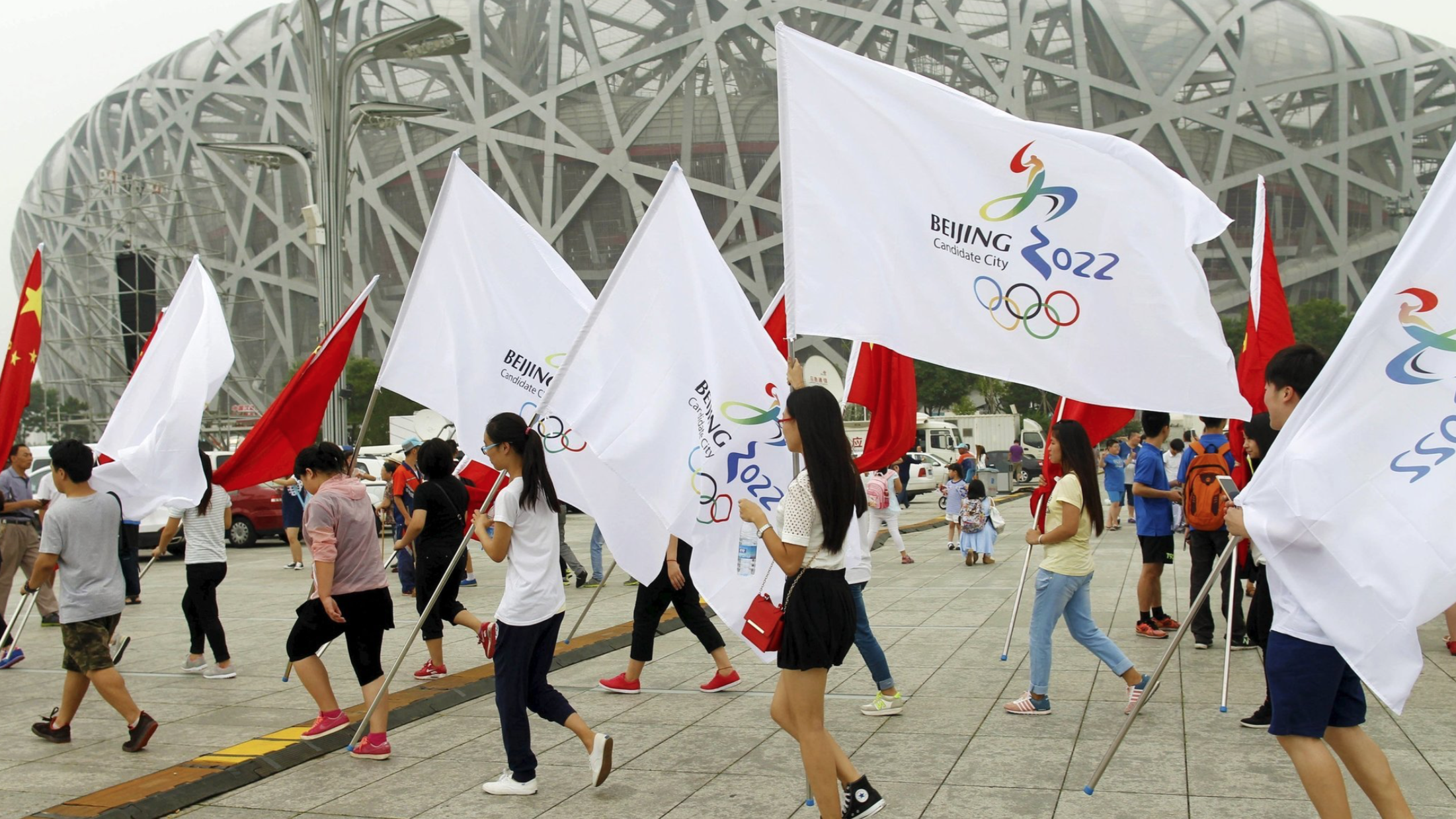 The United States led the way in announcing a “diplomatic boycott” of the Beijing Olympics on December 6, 2021, citing allegations of “genocide and crimes against humanity in Xinjiang and other human rights abuses.” (Photo via: Qiao Collective)

On February 4, the 2022 Winter Olympics are set to open in Beijing. With this, the Chinese capital will become the first city to have hosted both the Summer and Winter Games. It will also make the People’s Republic of China the first country in the Global South ever to host the Winter Olympics, which have historically been dominated by Europe and North America (home to the top 14 countries in the all-time medal table). China remains the only Asian host nation in history besides Japan and South Korea.

These milestones have gone almost entirely unremarked-upon in Western media coverage leading up to the Games, which instead paints China as a uniquely “authoritarian” and therefore undeserving host. The United States led the way in announcing a “diplomatic boycott” of the Beijing Olympics on December 6, 2021, citing allegations of “genocide and crimes against humanity in Xinjiang and other human rights abuses.” It was followed by Britain, Canada, and Australia (i.e., all but one of its “Five Eyes” allies), as well as Japan and a smattering of small north European countries.

The Five Eyes, which constitute a majority of “boycott” hangers-on, are united not just by the English language but by a common history of settler colonialism, Indigenous genocide, and violently enforced regional and global hegemony. And Japan remains largely unrepentant for its brutal invasion and colonial rule over much of East and Southeast Asia in the first half of the 20th century, which killed around 20 million people in China alone. The authors of this dismal spectacle are therefore in no moral position to levy such charges against China—charges which themselves have been repeatedly and thoroughly exposed as a mixture of gross exaggerations and outright falsifications, not least by hundreds of Uyghurs’ testimonials from within Xinjiang.

This is just one expression of the pervasive orientalist erasure of Chinese voices other than archetypal “perfect victims,” who clamor for Western salvation from Communist Party despotism. It operates at every level from whole nationalities like the Uyghurs to solitary individuals like tennis star Peng Shuai, whose Weibo post regarding her extramarital affair with former Vice Premier Zhang Gaoli went viral in November 2021. The post’s rapid deletion, and Peng’s subsequent absence from social media, led to a veritable torrent of performative concern over her safety—pushed by all corners of Western sports media as well as Steve Simon, the white American chairman of the Women’s Tennis Association. No amount of personal assurances from Peng herself, in public and impromptu interviews, sufficed to tamp down the now-universal speculation around her “forced disappearance” or the willful mistranslation of her post to imply sexual assault. This lurid story’s timing and implication of Chinese sports in particular made it irresistible to boycott campaigners, who are predictably using it to fearmonger over athlete safety and surveillance at the Games themselves.

China’s official responses to the diplomatic boycott have combined ridicule at apparent backtracking by the United States (which quietly requested, and received, visas for 46 consular officials) with boilerplate appeals to avoid politicizing the Games. Foreign Ministry spokesman Zhao Lijian, for instance, objected that the move “seriously violates the principle of political neutrality of sports established by the Olympic Charter.” While this is to be expected at an official level, it elides the manifestly and unavoidably political nature of international sport, and the modern Olympics in particular.

The Sordid Racial and Colonial History of the Olympics

The following historical overview draws extensively on Power Games: A Political History of the Olympics (2016) by Jules Boykoff, a former professional soccer player and current professor of political science at Pacific University in Oregon. He is perhaps the foremost critic of the Olympics and its often baleful social impact on host cities.

Boykoff points out that white supremacy and a particularly aristocratic vein of Eurocentrism were inscribed into the modern Olympics from the very beginning. Baron Pierre de Coubertin, who in 1894 founded the International Olympic Committee (IOC), lamented what he called“the natural indolence of the Oriental.” Nonetheless, he pressed for the inclusion of African athletes, if only because they were supposedly wracked by “a thousand jealousies of the white man and yet, at the same time, the wish to imitate him and thus share his privileges.” The 1904 St. Louis Olympics featured the grotesque spectacle of the Anthropology Days, an event intended (and rigged) to “prove” through head-to-head athletic contests that “primitive men are far inferior to modern Caucasians in both physical and mental development.”

These tendencies reached a sinister climax with the unabashed Nazi propaganda coup that was the 1936 Berlin Games. Some have condemned the blatant hypocrisy of the U.S. government leading a symbolic “boycott” of the 2022 Beijing Games after wholeheartedly endorsing the 1936 Berlin Games; opposing commentators treat the latter as the original “Genocide Olympics” and a precedent for the former. Easily forgotten in all these comparisons is that a robust campaign was mounted for a U.S. boycott in 1936. It was ruthlessly quashed by American Olympic Committee president Avery Brundage, who said that “Boycotts have been started by the Jews which have aroused the citizens of German extraction to reprisals. Jews with communistic and socialistic antecedents have been particularly active, and the result is that the same sort of class hatred which exists in Germany and which every sane man deplores, is being aroused in the United States.”

After his election in 1952 as president of the IOC, Brundage wrote admiringly that “Germany in the 1930s had a plan which brought it from almost bankruptcy to be the most powerful country in the world in a half dozen years. Other countries with dictators have accomplished the same thing in a smaller way.” His embrace of overtly white nationalist regimes extended during his presidency to apartheid South Africa and Rhodesia—which he fought fiercely if futilely to keep in the Olympic fold—and to the Jim Crow South in his home country. So synonymous was his name with white supremacy in sport that he earned the moniker “Slavery Avery.” In 1967, Black American athletes organized through the Olympic Project for Human Rights (OPHR) explicitly demanded “removal of the anti-Semitic and anti-Black personality Avery Brundage from his post as Chairman of the International Olympic Committee.”

The OPHR issued a novel call to boycott the 1968 Mexico City Games not over the choice of host, but rather the anti-Black racism pervading the entire IOC apparatus. No such boycott occurred, but Tommie Smith and John Carlos’ iconic Black Power salute on the Olympic podium nonetheless immortalized the campaign. Brundage was predictably apoplectic at this gesture, which he labeled a “nasty demonstration against the United States flag by Negroes,” and ordered both athletes suspended from the U.S. team. While the OPHR did not achieve all its aims—Brundage lasted four more years as president—it was instrumental in securing the expulsion of apartheid South Africa and Rhodesia from the Olympic movement. And its boycott call anticipated the principled withdrawal of 29 mostly African countries from the 1976 Games, after the IOC refused to ban New Zealand for permitting its rugby team to tour South Africa.

The IOC remains to this day a self-selected and self-perpetuating bastion of Euro-American chauvinism and aristocratic privilege. Fully one-tenth of its active and honorary members hold hereditary royal titles (though these now include a strong Gulf Arab contingent), and its only “honor member” is Henry Kissinger. Every IOC president save for Brundage has been European; French and English remain the only working languages. Thus, for the first eight decades of their existence, efforts to boycott the Olympics emanated almost exclusively from the oppressed peoples—and were met with ferocious condemnation from the United States and its allies.

When those same forces of reaction now call for a “boycott” of the 2022 Beijing Games, they leave no doubt as to what they actually fear: a rising China challenging their heretofore untrammeled domination of global sport. Even Jules Boykoff, in an otherwise highly critical commentary that readily accepts many Western attack lines on China, takes pains to point out:

“In the U.S., China has become a bipartisan punching bag, with politicians on both sides of the aisle making evidence-free claims that would make McCarthy blush. This feeds oversimple narratives that juxtapose a freedom-loving USA against a diabolical Chinese state. In turn, this sanctimonious outlook stokes the U.S. war machine… This saber-rattling ignores the fact that the U.S. has around 750 military bases circling the world while China has only one, and it comes at a time when U.S.-China cooperation is vital on climate change and other security matters.”

Charles Xu is a member of the Qiao Collective and of the No Cold War collective.

This article was first published on Qiao Collective and was adapted in partnership with Globetrotter. 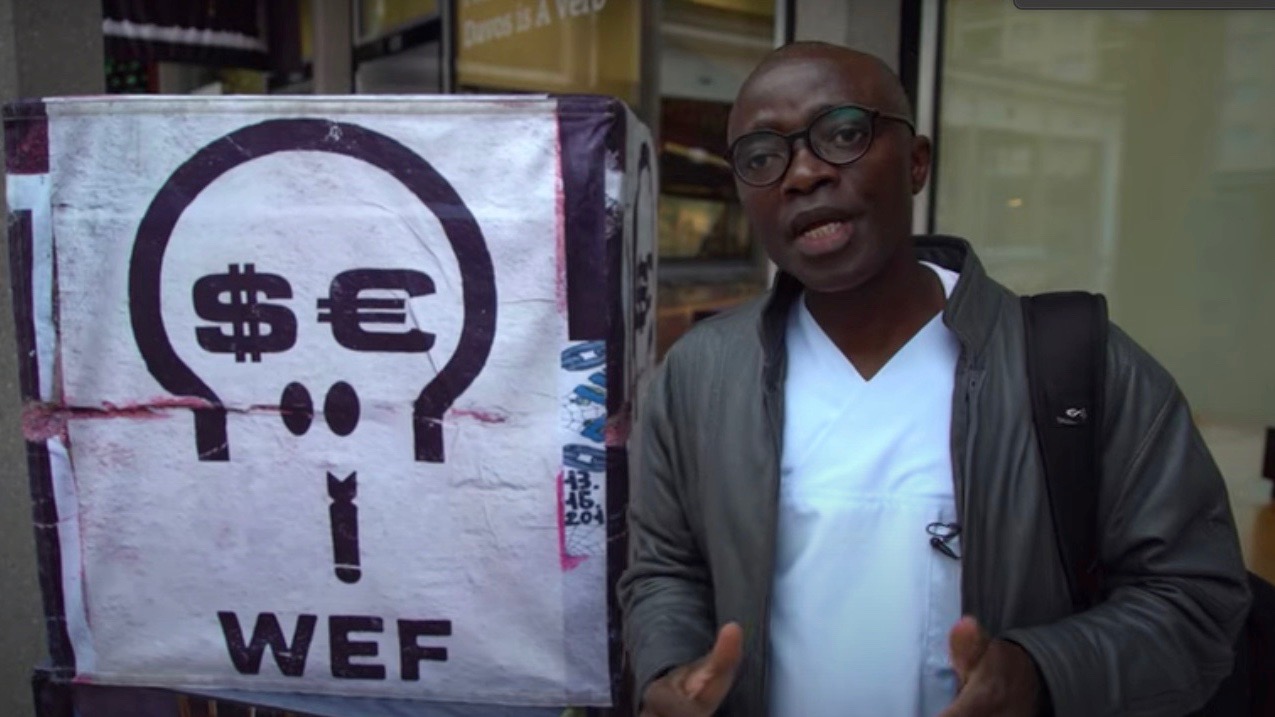