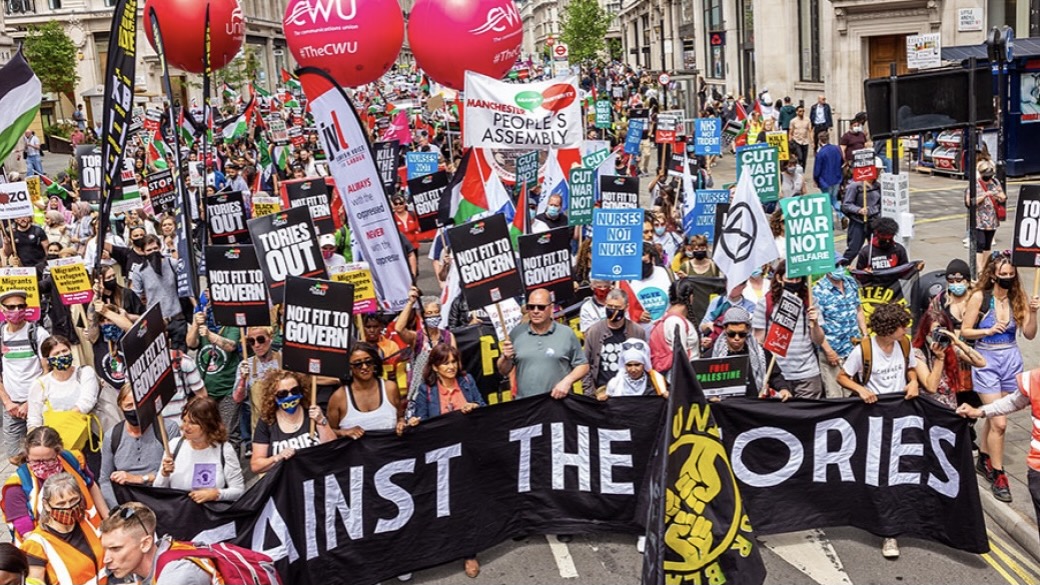 The People's Assembly Against Austerity has organized a national day of action to demand the government take immediate measures to address the cost of living crisis. Photo: Morning Star

Broad sectors of the working class in the UK will take to the streets in cities across the country on February 12 against the rise in the cost of living. The protests are organized under the banner of the People’s Assembly Against Austerity and have been endorsed by organizations such as the Communist Party of Britain (CPB), Young Communist League (YCL), Unite Trade Union, Socialist Appeal, Revolutionary Socialism in the 21st Century, Disabled People Against Cuts (DPAC), Fuel Poverty Action, and others. Around 30 cities are expected to mobilize on this day of action.

Prior to the protests, the People’s Assembly Against Austerity demanded that the Tory government freeze the energy prices in the country and increase wages and benefits in order to tackle the cost of living crisis experienced by the common people across the country.

Earlier in this month, Britain’s energy sector regulator, Ofgem, announced that its cap on the energy prices would rise by over 50% in April this year. According to a Morning Star report, the UK has already been bearing a high inflation with the Consumer Price Index (CPI) already at 7.5%, while workers are seeing increases in their bills and National Insurance payments as of April 1. Approximately 22 million people are likely to see an annual increase of £693 (939.15 USD) on their energy bills due to the price cap rise.

Protesting against this unprecedented rise in energy prices, the Communist Party of Britain (CPB) has released a pamphlet titled ‘The Great Energy Rip-off’, in which CPB has called out that “a progressive nationalization and a democratic paradigm of public ownership, which would encompass the production of oil and gas, as well as transmission and distribution is the need of the hour”.

Towards the protest, in its appeal, the People’s Assembly Against Austerity has accused that real term cuts in wages and pensions has seen millions in the UK unable to afford basic necessities. The proposed hike in energy prices will further push them to a breaking point, while oil and gas companies post record profits and boast paying rich dividends to their shareholders.

In her statement, extending solidarity to the protest, Unite General Secretary Sharon Graham said that “why should workers pay for the energy crisis and why should they pay for shambolic Government policies? Demonstrations are springing up because people are fed up with rich men telling them that they have to pay for boardroom greed and colossal market failure.”

The Socialist Appeal has stated that “we call for an end to the anarchic, crisis-ridden capitalist system. Only by placing the economy in the hands of workers can we secure a high standard of living for all.”

The People’s Assembly Against Austerity has also announced organizing major protests on March 5 and April 2 of this year, unless the government takes concrete actions to mitigate the crisis.