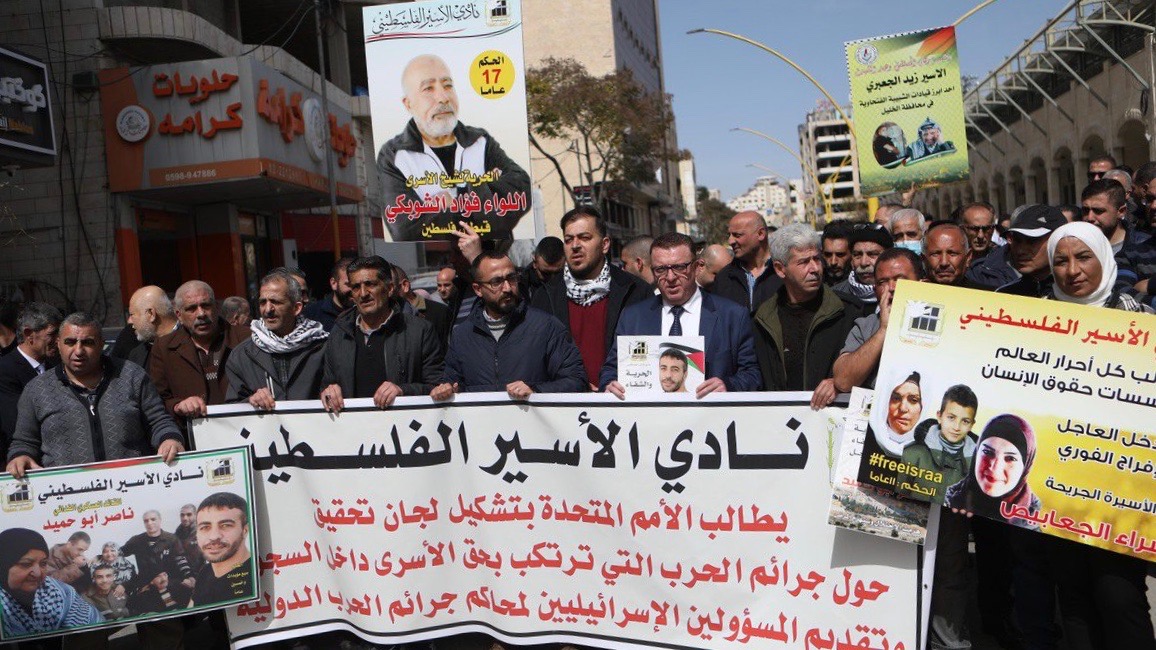 Palestinian prisoners and administrative detainees across prisons and detention centers in Israel are continuing their protest against the repressive measures imposed on them by the Israeli prison authorities, multiple news reports stated on Sunday, March 6. Israeli authorities had imposed various new additional restrictions and measures on the prisoners in the aftermath of the Gilboa prison break in September last year, when six Palestinian detainees managed to escape from prison before being apprehended a few days later. Some of the retributive measures imposed by the Israeli authorities were separating prisoners with same political affiliation, solitary confinement, cutting off access to canteen facilities, and reducing the break time allotted to them to spend in the prison yard, among others.

According to the Palestinian Prisoners’ Club, the prisoners launched their collective protest actions on February 5. They have started several new forms of protest, such as disobeying prison rules, not complying with daily security checks, and staging sit-ins in prison yards. The prisoners have reportedly formed a high follow-up committee composed of all the different political factions among the prisoners. The committee represents the prisoners in the negotiations with the prison authorities and decides the course of actions for the prisoners’ protest. As per reports, Palestinian prisoners are set to launch a mass hunger strike on March 25 if their demands are not met.

Around 500 administrative detainees are also involved in a historic protest against their arbitrary detention. They are boycotting Israeli military courts for a record 65th day in a row, refusing to be present at initial hearings, appeal hearings and later hearings in Israeli military and civilian courts. Among them, four detainees are under the age of 18 and one is a woman. The detainees launched their protest on January 1 under the banner “Our decision is freedom … no to administrative detention.” Several detainees are also refusing to meet their interrogators from the Israeli domestic intelligence agency Shin Bet. Those suffering from health problems requiring medical care have also started boycotting prisons’ clinics, medicines and medical check-ups. They are demanding an end to the policy of administrative detention and the immediate release of all the detainees. Many Palestinian detainees have in the past embarked on hunger strikes to protest their illegal detention and secure their release from Israel.

The international community and human rights groups have for years called on Israel to stop the policy of administrative detention, using which Palestinians are detained indefinitely without charge or trial for extended periods of time. Administrative detention orders can be renewed every 4-6 months based on secret evidence which is not shared even with the detainees or their lawyers. Despite international criticism, the number of orders issued on a yearly basis is steadily increasing. Israel passed 1,595 such orders in 2021, a significant spike from the 1,114 orders issued in 2020. 1,742 orders were issued in 2016, among the highest documented. Since 2015, Israel has issued 8,700 administrative detention orders against Palestinians, according to the Palestinian Prisoners’ Society (PPS). This year, 96 orders have been issued in the month of January alone. In total, there are approximately 4,600 Palestinian prisoners in 17 Israeli jails, including 32 women and 180 minors, and 500 administrative detainees.