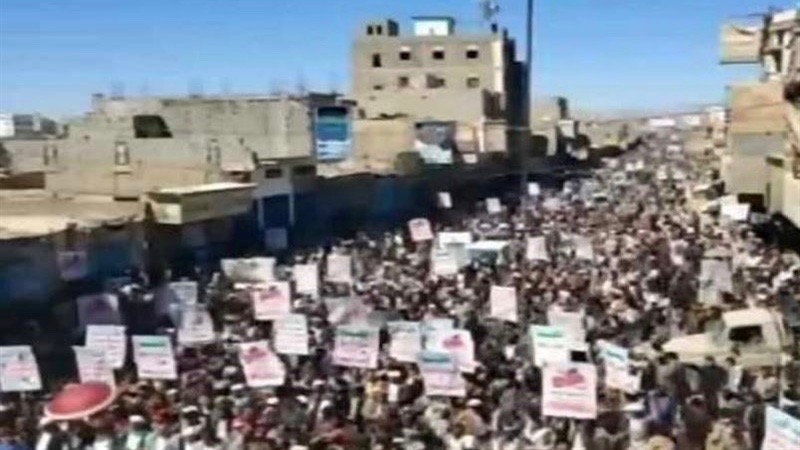 The war-torn country of Yemen witnessed massive protests on Monday, March 7, in cities and towns across Houthi-controlled areas against the worsening fuel shortage crisis due to the Saudi-led Gulf coalition’s blockade of the country. According to reports, thousands of Yemeni civilians took part in the demonstrations and denounced the Saudi-led coalition, as well as the United States for being responsible for the dire humanitarian situation in the country which has caused millions to be internally displaced. Millions more are dependent on international humanitarian aid for their survival.

The fuel shortage is primarily caused by the coalition blockade not letting ships carrying fuel to the Houthi-controlled areas enter the ports. Some of the ships and the oil shipments they were carrying have also been seized, especially to the critical port in the city of Hodeidah through which 75-80% of all imported essential supplies reach Houthi-controlled areas. The illegal blockade has also resulted in acute shortages of several other essential items including food grains and medicines. This has resulted in widespread suffering and hardships for civilians in Yemen caught in the civil war and the coalition’s military intervention.

Demonstrations were reported from the provinces of Sa’ada, Hajjah, Taizz, Amran,  al-Jawf, Ibb, and al-Bayda. Protests also took place in Yemeni capital Sanaa. In a statement, the protesters said that they hold the US fully responsible for the blockade imposed on Yemen and called the seizure of petroleum products “an American aggression,” adding that it is their duty to oppose it. The statement called the blockade of the port city of Hodeidah a war crime and condemned the silence of the international community, especially the United Nations, on the blockade and other war crimes and crimes against humanity that continue to be perpetrated by the Saudi-led coalition.

The Saudi-led coalition started its blockade of Yemen concurrently with the launch of its devastating military intervention in March 2015 with the aim of defeating the Houthis and restoring the Western and Gulf-backed Yemeni government of president Abdrabbuh Mansur Hadi. Yemen’s Houthi movement in 2014 overran and captured most of the northern parts of Yemen, including Sanaa where it drove out the Hadi government from its seat of power.

In the ensuing civil war and military intervention, close to 400,000 Yemenis have lost their lives, according to UN estimates. As per UN statistics, over 24 million Yemenis, approximately 80% of the total population of around 30 million, have been forced to rely on humanitarian aid. Upwards of 10 million are suffering from acute poverty and hunger and face constant risk of famine. Millions of Yemenis also face the threat of disease outbreaks and death amid the rapidly declining state of the health and medical infrastructure, which was already in bad shape before the extensive damage caused by the violence and military conflict in the last eight years.

The UN as well as international human rights groups and medical charities have repeatedly appealed to the Saudi-led coalition to lift the siege on Hodeidah. The humanitarian situation in Yemen is likely to worsen as fighting has once again escalated between the Houthis, the Yemeni government forces and other warring factions. The Saudi-led coalition has stepped up its indiscriminate airstrikes and bombings on Houthi-controlled areas, targeting even civilian neighborhoods including marketplaces, schools and mosques.