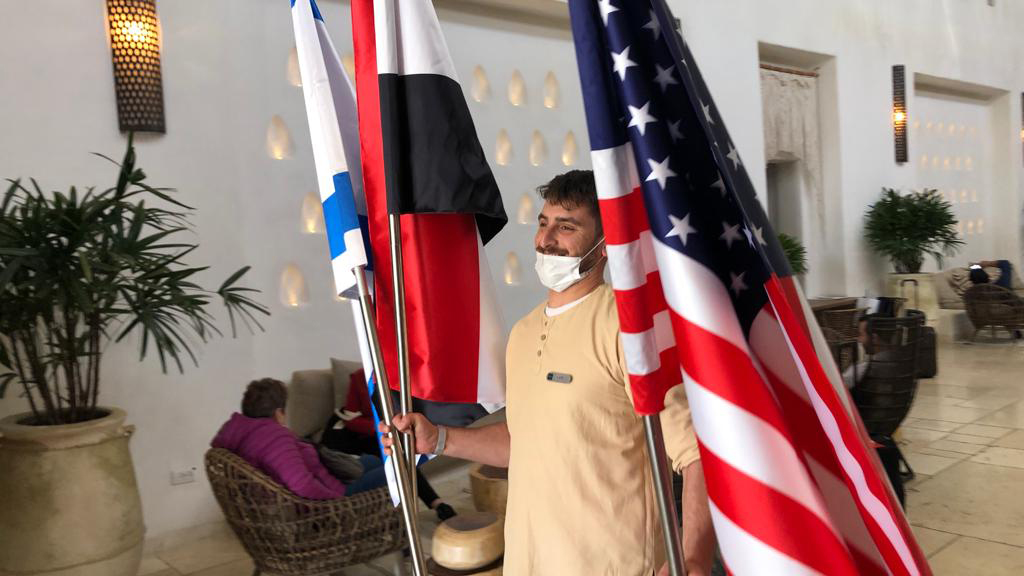 A Kedma Isrotel hotel worker carries flags out of the Negev Summit after its conclusion, March 28, 2022. (Photo via Lazar Berman/Times of Israel)

Israel has taken hurried steps to devise a common regional strategy against Iran as the possibility of the revival of the Iran nuclear deal increases. Israel hosted foreign ministers from four Arab countries and notably, the US Secretary of State Antony Blinken in the Naqab (Negev desert) region for the first ever Arab-Israel summit meeting on March 27 and 28.

Participants included foreign ministers from Egypt, the first Arab country to sign a normalization deal with Israel in 1979, and Bahrain, UAE, and Morocco who had signed various versions of the Abraham Accords in 2020 and 2021.

Attempts to create a common strategy against Iran

Though the stated objective of the meeting was to discuss the situation created by the war in Ukraine and cooperation between Israel and the Arab countries, Israel reportedly pushed for the meeting to discuss Iran and to craft a common strategy to confront it.

Iran is soon expected to finalize the Iran nuclear deal with the Biden administration after over a year of talks in Vienna. The deal will eventually lift the US sanctions imposed during the Trump presidency when the US unilaterally withdrew from the deal also called the Joint Comprehensive Plan of Action (JCPOA).

The Negev summit was held immediately after a trilateral meeting held between Egypt, UAE and Israel in Sharm el-Sheikh last week, with a similar agenda.

Former Indian diplomat M K Bhadrakumar argued that apart from building pressure on Ukraine, US official Blinken was present in the meeting in order to “get the regional allies accustomed to the imminent conclusion of the negotiations at Vienna leading to the removal of US sanctions against Iran.” Israel, however, believes that lifting sanctions imposed by the US will strengthen Iran’s presence across the region and as such has tried to exploit the similar apprehensions of the Gulf countries.

“This new architecture, the shared capabilities we are building, intimidates and deters our common enemies, first and foremost Iran and its proxies,” Yair Lapid said at the end of the summit on Monday, confirming the Israeli objective.

However, as per reports in local media, Israel’s anti-Iran objective was not explicitly shared by other participants of the summit. A UAE official told Times of Israel, “for us, it’s about regional integration and better economic, security and energy cooperation,” in other words, not only about Iran.

Betrayal of the Palestinian cause

Palestinians have denounced the countries who have signed normalization deals with Israel, accusing them of betrayal of the Palestinian cause and the pledges taken under the Arab Peace Initiative of greater unity against Israel. Palestinian organizations such as Hamas, which controls the besieged Gaza, issued a statement on Sunday March 27 absolutely rejecting “all forms of normalization with the occupying regime.” According to Hamas, meetings such as the Negev summit “only serve the enemy in perpetuating aggression against our land, our people and our holy sites.”

Palestinian Prime Minister Mohammad Shtayyeh said on Monday that “Arab normalization meetings without ending the Israeli occupation of Palestine are just an illusion, a mirage, and a free reward for Israel.”

Nevertheless, some participants in the summit, such as Antony Blinken and Egyptian Foreign Minister Sameh Shoukry, emphasized the need for a two-state solution. Blinken even claimed that “regional peace agreements are not a substitute for progress between Palestinians and Israelis.”

These reiterations of commitment to a two state solution by the US and other Arab countries make little sense given the fact that Prime Minister Naftali Bennet and most of his colleagues in his coalition government have repeatedly denied any possibility of an independent Palestinian state.