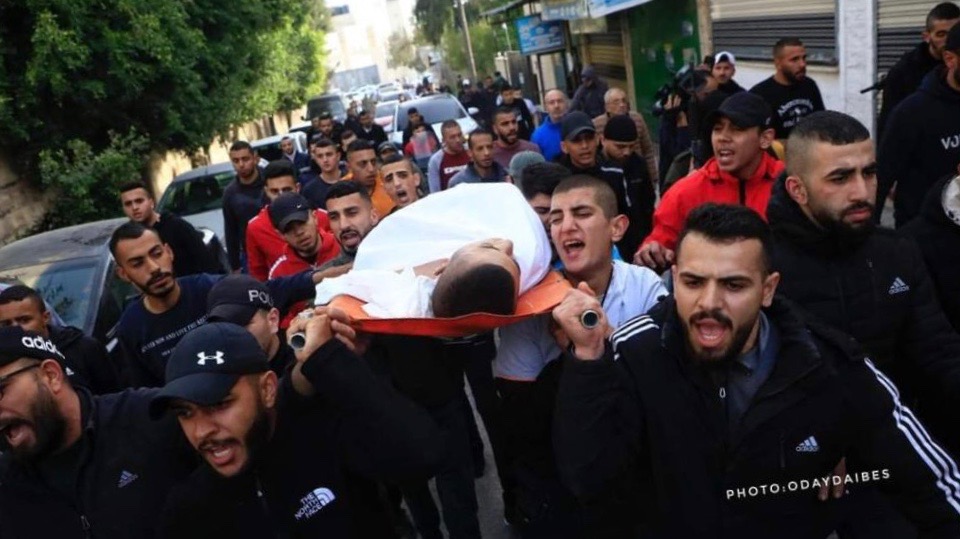 Palestinians take part in the funeral of 17-year-old Mohammad Zakarneh who was shot and killed by Israeli forces in the occupied West Bank city of Jenin on April 11, 2022. (Photo: QNN)

Three Palestinians including two women were killed by the occupying Israeli forces in separate incidents in the occupied West Bank on Sunday, April 10. The killings indicate Israel’s increased use of lethal force on Palestinians following the recent attacks witnessed in different cities inside Israel.

The two women, Ghada Ibrahim Sabateen and Maha al-Zataari, were killed by the Israeli forces in the occupied West Bank. Ex-prisoner Mohammad Ali Ghoneim was killed during a raid near his home in Al-Khader in Bethlehem.

Sabateen (47), a widowed mother of six, was shot by the occupation forces when she was crossing an Israeli checkpoint near the village of Husan, west of Bethlehem. She later died in the hospital.

Just to give an idea of how propagandized Israelis are: despite the army admitting that the murdered Palestinian mother had no weapons, mainstream Israeli media outlets continue to report misinformation (as they do), and the Israelis are celebrating in the comments. Demented. pic.twitter.com/oDdUHkSB1x

Al-Zataari (24) was shot after she allegedly attacked a security personnel in Hebron with a kitchen knife.

Ghoneim (21) was shot and killed after he along with other Palestinians objected to a violent raid on their homes in the locality.

A day of strike was observed in Bethlehem on Sunday against the killing of four Palestinians by the Israeli forces. The fourth victim was identified as 17-year-old Mohammad Zakarneh who died on Monday, April 11, after being injured in the Israeli shooting in Jenin on Sunday.

Meanwhile, occupation forces continued their raid in Jenin for the second day on Sunday, allegedly searching for the homes of suspects involved in last week’s attacks in Tel Aviv in which at least three Israelis were killed and over a dozen people were injured. The Israeli forces have raided several other localities in the occupied West Bank. According to local media sources, at least 10 Palestinians were injured after Israeli forces used force when they objected to the raids on Sunday.

WATCH: As Palestinians prepare for another attack on Jenin by Israeli forces, they are barricading entrances to the city. For those calling for nonviolence, preventing genocidal violence by blocking resources from the oppressor is an example for you. This is resistance. pic.twitter.com/T2Smc1z6o6

On Sunday, Israeli forces arrested at least 23 Palestinians from across the occupied West Bank in relation to the attack.

In the last few weeks, Israeli forces have increased their use of lethal force, killing 13 Palestinians in the same period.

Several Palestinian commentators have stated that aggressive apartheid policies adopted by Israel against Palestinians in the last few years is the reason for the recent increase in attacks inside Israel. The surge in incidents of land grabbing, shooting of unarmed civilians, settler violence in Palestinian villages, forced displacement, and repeated attacks on the al-Aqsa mosque have pushed the Palestinians to react, they claimed.

The root of violence in Palestine/Israel is the Israeli occupation which enacts daily acts of violence on Palestinians necessary for the sustenance of the Israeli apartheid state – incarcerations, raids, checkpoints, evictions, arresting kids, demolitions etc…

Instead of addressing the issue of occupation, the government in Israel has pushed for more violent oppression. Prime Minister Naftali Bennett last week issued order giving a “free hand” to Israeli forces to “defeat terror”. This has led to an increase in the number raids on Palestinian localities and incidents of shootings.

Following reports of Palestinians using barbed wire to cross to Israel to carry out the attacks, the government in Israel issued orders to replace them with concrete walls on the lines of the separation barriers built across the occupied West Bank. The Bennett government approved USD 112 billion for the wall on Sunday.

Local media reported Bennett saying that “the state of Israel has gone on offensive” to “settle accounts with everyone” who is involved in the attacks.

Reacting to Sabateen’s killing, Noura Eraket, who teaches at Rutgers University, said that “the ease with which the state kill Palestinians does not merely reflect a settler anxiety but written into law to make it a systemic feature of Palestinian life and its precarity.”

The EU issued a statement condemning the killing of Sabateen, saying that “such excessive use of lethal force against an unarmed civilian is unacceptable.”