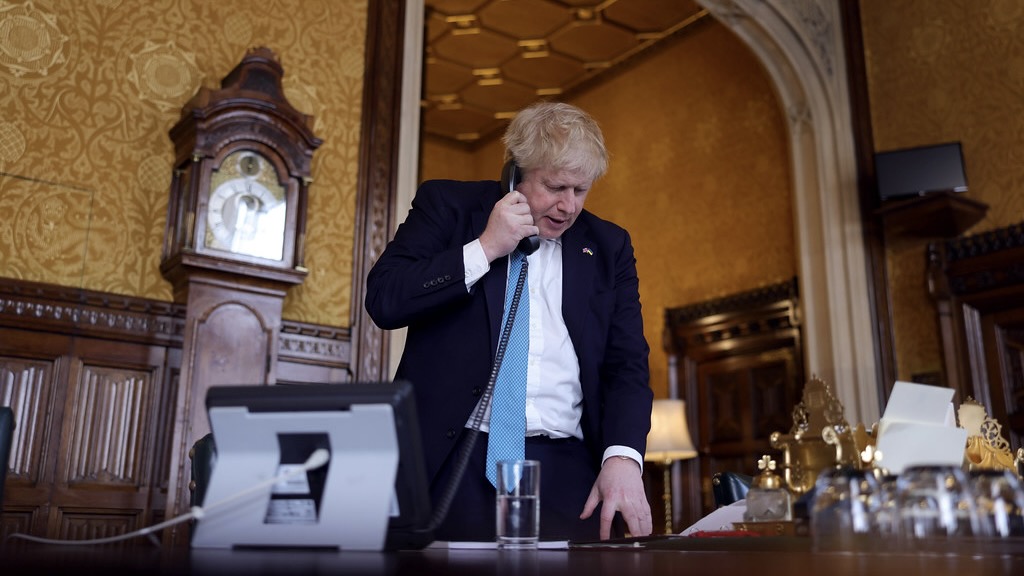 Common people across the UK are facing higher energy bills and food prices while the Tories in government are busy sorting their non-domicile tax receipts and paying fines for lockdown parties. The spike in working class protests across the country saying #WeCantPay has highlighted the severity of the cost of living crisis that ordinary British families are facing. At the same time, recurring controversies implicating the top brass of the Tory government also reveal a crisis of governance that has struck the country.

According to reports, by the end of March, inflation in the UK had reached 7% – the highest in the last 30 years. The country is facing the biggest drop in living standards since the mid-1950s, with a marked rise in food prices, energy bills and taxes, among other things. Experts have predicted that the inflation rate will shoot up further by the end of this month with the 54% rise in energy cap announced by UK’s energy sector regulator Ofgem coming into effect from April 1. The rise in the price cap is set to affect 22 million customers as the default tariffs paid by direct debit will see an increase of £693 (USD 901.18) per year while prepaying customers will pay £708 (USD 920.68) more. Various groups including the People’s Assembly Against Austerity, Unite the Union, the Communist Party of Britain (CPB) and the Young Communist League (YCL-Britain) have already registered strong protests against the cost of living crisis. The crisis has turned out to be a breaking point for many working class and middle income families who are already distressed by the fallout of the COVID-19 pandemic.

On April 13, Unite general secretary Sharon Graham stated that “the double whammy of soaring inflation and falling wages is creating an historic cost of living crisis for workers. Big business is trying to force workers to pay the price for the pandemic.”

Meanwhile, the Boris Johnson-led Tory government is attempting to place the entire onus of the cost of living crisis on the ongoing Russia-Ukraine war in order to cover up the disastrous ramifications of its pro-rich policies characterized by privatization of key services including the National Health Services (NHS) and profiteering even amidst the pandemic and wars.

With the support of the Tory government, various private enterprises in the country continue with anti-worker policies, as in the case of 800 workers being fired by British ferry operator P&O without notice. Workers in the transport sector, including in the London Tube led by the RMT union, have organized multiple strikes recently against the bid for further privatization and job cuts. The pro-government media has tried to defame the striking workers and trade union leaders as pro-Putin saboteurs within the UK. Meanwhile, Johnson himself visited Kyiv and met Ukrainian president Volodymyr Zelensky on April 9 to boost the NATO-led war efforts to counter the Russian offensive.

Amidst all these crises, around 50 people including Prime Minister Johnson and Chancellor Rishi Sunak received penalty notices in a probe into allegations of parties being held at Downing Street earlier in breach of COVID-19 lockdown protocols. The UK was among the countries worst hit by the Omicron variant. While the government stumbled from crisis to crisis, the parties expose the deep insensitivity that characterized its response to the pandemic as hospitalizations soared and health staff faced extreme pressure.

Following the news of penalties for the lockdown parties at Downing Street, calls for the resignation of Johnson and Sunak have intensified across the UK. On Tuesday, COVID-19 support group Bereaved Families for Justice stated that “they took us all for mugs. If they had any decency, they would be gone by tonight.”

Additionally, allegations of tax evasion have come up against Sunak’s wife. She is accused of evading taxes worth millions in the UK using a provision for non-domiciled persons (people living in the UK who have their permanent home or domicile in another country). The special tax remission provision for non-domiciled people has allegedly allowed wealthy foreign immigrants in the UK to enjoy all the state benefits, but when it comes to paying taxes in the UK, they are exempted for the part of their income generated from businesses abroad. The news was met with outrage by opposition activists.

On April 12, MP Jeremy Corbyn tweeted, “Boris Johnson and Rishi Sunak have been fined by the police for breaking the law. Now they should be held to account for the UK’s 170,000 COVID deaths, COVID contract corruption and for the millions of people they have plunged into poverty while the super rich dodge their taxes.”

In its statement on April 12, the CPB stated, “the working class in Britain is facing the most vicious ruling class offensive in generations, with a huge rise in the cost of living and attacks on democratic rights. The soaring cost of living is prompting outbreaks of industrial action as workers across the public and private sectors demand higher pay to meet rising prices.”

The CPB also extended solidarity with the workers of P&O ferries and criticized the government’s readiness to finance NATO’s war efforts in Ukraine while denying financial assistance to millions of working people suffering due to these crises. In a pamphlet published earlier, the CPB condemned the unprecedented rise in energy prices by Ofgem as “The Great Energy Rip-off”. The party called for a “progressive nationalization and a democratic paradigm of public ownership of Britain’s energy industry, which would encompass the production of oil and gas, as well as transmission and distribution is the need of the hour.”

Socialist Worker had earlier made an appeal to the Labour Party to wholeheartedly mobilize against the cost of living crisis rather than supporting pro-NATO marches and military funding.