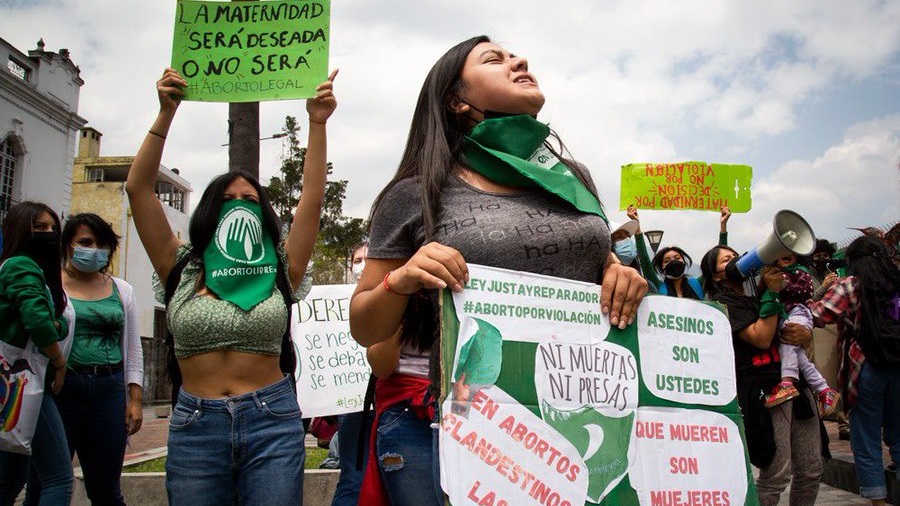 “Motherhood will be desired or it will not be” reads the green placard. Photo: Plan V/Twitter

On April 16, a bill that allowed women and girls to access abortions when pregnancy was the result of rape was enacted into law in Ecuador. The law has given minor advances from the previous legislation which only allowed abortions when a woman’s life was at risk due to pregnancy, and when the pregnancy was the result of rape of a woman with a mental illness. However, feminist and women’s rights movements rejected the recently promulgated law, condemned it as restricted and vowed to continue their struggle for unrestricted reproductive rights.

In April 2021, the country’s Constitutional Court decriminalized abortions in rape cases and ordered the National Assembly of Ecuador to make necessary modifications in the existing law. In February 2022, the country’s unicameral parliament approved a bill that permitted abortions up to 12 weeks of gestation for most adult women in cases of rape, with an extension of up to 18 weeks for minors and women in rural areas. The bill was passed with 75 votes in favor, 41 against and 14 abstentions,. At that time, feminists and women’s rights activists criticized that the bill failed to guarantee real and effective access to legal and safe to rape survivors. They said that the time limits set were too inhibitory and would force women to continue to seek clandestine abortions in unsafe conditions. They called on President Guillermo Lasso, despite being aware of his anti-abortion position, to veto the bill and return it to the Congress so that the legislators eliminate these restrictions and approve a new bill that is truly fair and restorative.

Nevertheless, the conservative president attached more importance to his personal convictions. In March 2022, President Lasso partially vetoed the bill, and proposed further restrictions. He suggested unifying the deadline at 12 weeks for all, without exception. Additionally, he proposed that at least one of the three “requirements” must be fulfilled to access abortion. These were submitting a complaint, signing an affidavit, or a medical examination attesting the sexual assault. Furthermore, he said that girls and adolescents would require authorization from legal representatives. He even suggested respecting any conscientious objections that medical staff may submit to dealing with abortion cases. The controversial decision was widely condemned by national and international human rights organizations and health experts. Several of them pointed out that the presidential veto and his proposed amendments, instead of guaranteeing a rape victim to access abortion, further narrowed its scope.

The National Assembly had the opportunity and a period of 30 days until April 16 to override the presidential veto. However, much to the movements’ disappointment, the parliament failed to discuss and rule on the veto. On April 15, the Congress, with 17 votes in favor, 73 against and 40 abstentions, rejected the motion to lift the presidential veto, presented by opposition legislator Pierina Correa of the progressive Union of Hope alliance. In the aftermath, the National Assembly President Guadalupe Llori immediately suspended the legislative session, without giving way to parliamentary debate on other motions aimed at reaching a resolution on the veto. With a brief “the session is suspended, have a good holiday!,” Llori adjourned the plenary. Later, the next day’s session was also suspended.

Since the National Assembly failed to pronounce on the matter within the stipulated time frame, President Lasso’s version of the bill, with a total of 61 changes, was approved by the Ministry of Law and entered into force.

Push to make abortion a 'human right' in Ecuador defeated after veto – The Christian Post https://t.co/oe5qc9w89c

Women’s rights organization Surkuna rejected Llori’s action, calling it “frivolous and cruel” and said that “history will remember you as an accomplice in the torture of rape survivors.”

“Today is a painful day for rape survivors in Ecuador. Once again, religious beliefs are imposed on human rights. Once again, the state institutions fail us,” the organization tweeted.

Meanwhile, Verónica Vera, one the coordinators of Surkuna, in conversation with Radio A La Calle, condemned that “the Executive’s [president] veto transforms 97% of the text of the bill, including its objective that was to guarantee access to abortion in cases of rape.” Vera added that “the position taken by the president of the National Assembly, Guadalupe Llori, is of complicity with an Executive who has spoken out against sexual rights and women’s right.”

Feminist lawyer Lita Martínez Alvarado lamented that “the political agreements that violate our rights are evident today! Those who will be most affected by the veto of Guillermo Lasso are the girls and women who are most vulnerable! But from the feminist movement, we will remain organized, and continue fighting.”

Legislator Johanna Moreira of the Democratic Left party and the original bill’s rapporteur condemned that “the president of the National Assembly ‘forgot’ that the ratification motion submitted by legislator Alejandro Jaramillo Gómez on April 5 was pending a vote. The pact between her and Guillermo Lasso for the anti-rights veto to enter into force is evident.” She pointed out that “no right to women and LGBTQI+ community has been given to us without a fight,” and stressed that “we will be ready to continue defending human rights, because access to abortion after rape is a right.”

Legislator Alejandro Jaramillo Gómez also rejected Llori’s move as shameful. “Once again, Guadalupe Llori played the government’s game. She suspended the session without considering my motion to ratify the text of the Voluntary Termination of Pregnancy for Rape Bill. The document was submitted on April 5 and we had 92 votes!,” he tweeted.

Both Moreira and Gómez indicated that they would challenge the law. “We are going to continue fighting. Once it enters the Ministry of Law as Llori wanted -trampling over the rights of girls, adolescents and women of Ecuador- we will file a lawsuit of unconstitutionality,” Gómez wrote. 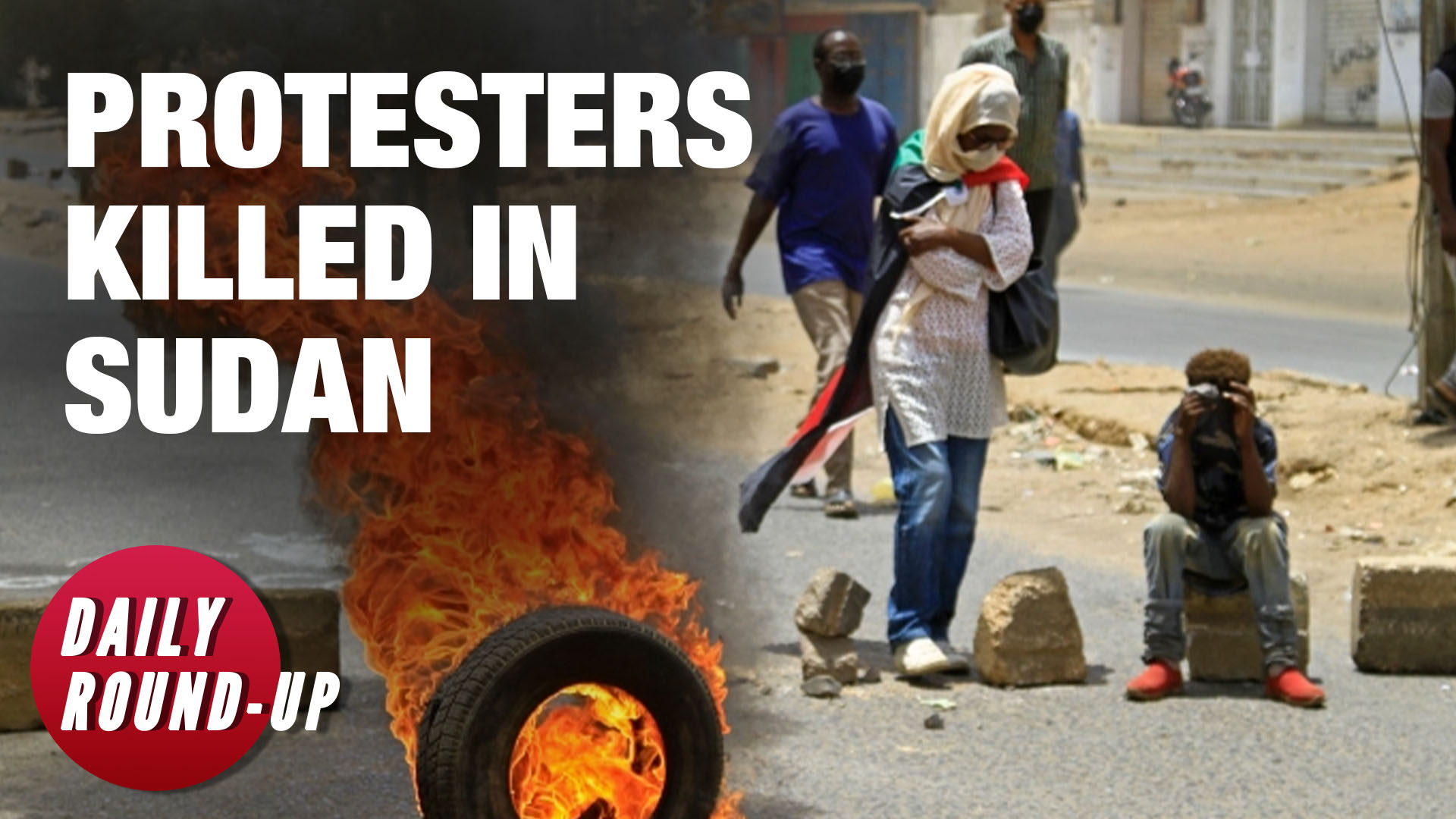 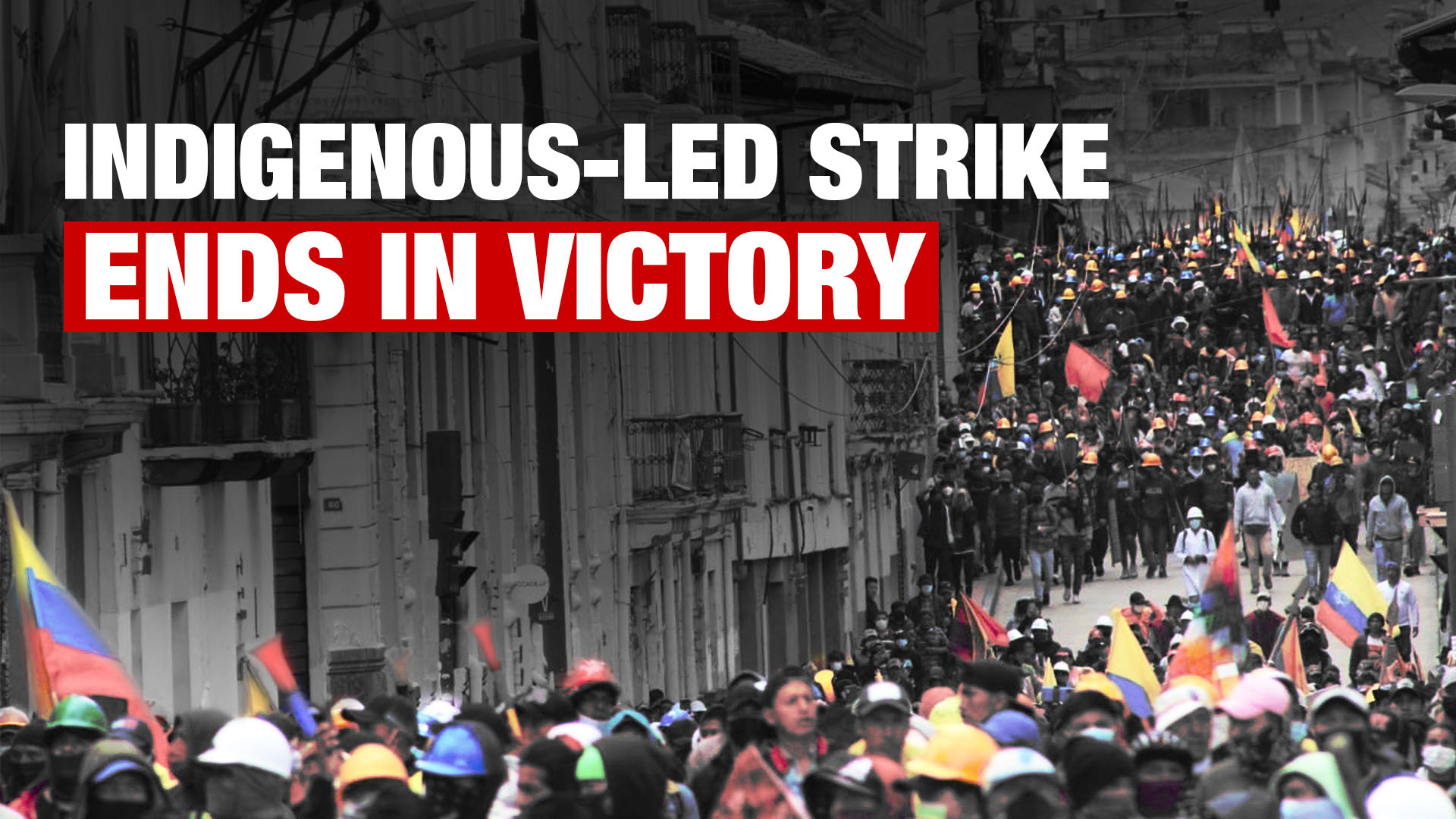