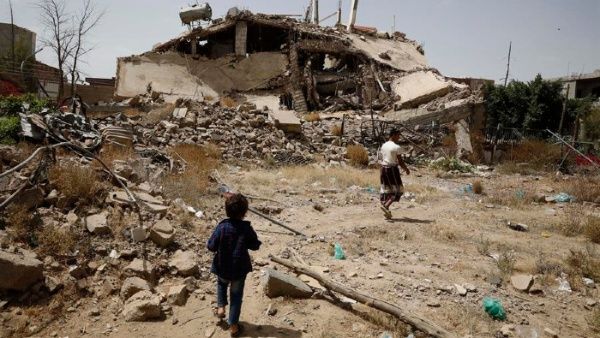 Photo by EFE via Telesur

The UN-sponsored ceasefire in Yemen was extended for two more months on Thursday, June 2. The announcement of the extension was made by the UN special envoy for Yemen, Hans Grundberg, in a statement.

Grundberg claimed that “the parties to the conflict have agreed to the United Nations’ proposal to renew the current truce in Yemen for two months” on the same conditions as were made during the announcement of truce in April.

After the Houthis had announced a three-day unilateral truce on the occasion of Ramadan in March, the UN had negotiated a two months’ ceasefire effective from April 2.

The Houthis and the Saudi-led alliance agreed to the extension of the truce despite complaining of each other not adhering to basic provisions of the previous agreement.

At the time of the original truce, Yemeni groups backed by the Saudi-led coalition had agreed to partially lift the blockade on Houthi-controlled areas, allowing two flights per week from the Sanaa International Airport, the partial opening of the Hodeidah port and a pause on all military exercises. In return, the Houthis had agreed to lift the siege of Taiz, a city in the country’s southwest.

The Houthis have complained that the Saudi Arabia-led coalition delayed the lifting of the blockade from the Sanaa International Airport. They have also complained about continued air raids and shelling by the coalition forces.

The Saudi Arabia-led coalition, on the other hand, has flagged the Houthis’ refusal to lift the siege of Taiz.

Last week there was a talk between the representatives of the Houthis and the Saudi-backed government in Aden over Taiz in the Jordanian capital of Amman. The talks were inconclusive, leading to the intervention by Grundberg.

Even when the UN was announcing the extension of the truce, Yemen’s Saba news reported Saudi airstrikes in the al Mattma district in Jawf.

Despite the complaints, during the two months of the truce – the first such truce since the war began in 2015 – aggression and casualties due to the war have decreased significantly, according to the Norwegian Refugee Council (NRC).

The announcement of the extension of the truce was welcomed by anti-war and human rights groups who had been campaigning for peace.

Today, we join together with more than 30 organisations working across #Yemen to urge both parties to the conflict to extend the truce, to offer a real hope of peace and a chance to end the suffering of millions of people across Yemen. https://t.co/mn6zQ83KYt pic.twitter.com/yej8URPAaj

“In order for the truce to fully deliver on its potential, additional steps will need to be taken, particularly on the matters of road openings and commercial flight operations,” the UN statement underlined.

Meanwhile, a group of nearly 50 US congress members, including both Democrats and Republicans, introduced legislation to end US involvement in Yemen. The resolution was introduced after massive support extended by the human rights groups.

Thank you to @RepPeterDeFazio, @RepJayapal, @RepNancyMace, @RepAdamSchiff, and the 40+ members of Congress who are doing what Biden *should* have done on his 1st day in office– end US complicity in the suffering and death of the Yemeni people. #YemenCantWait https://t.co/4MZugVpLkN

The US and its allies, the UK and France, have been major suppliers of weapons and technical support to the Saudi Arabia-led coalition’s war in Yemen since 2015. After a long campaign against the US arming of the Saudi coalition, the Biden administration had announced a halt in sale of offensive weapons to the Saudis in February 2021. However, the US weapons sales to Saudi and its allies such as the UAE continued after Congress refused to ban it.