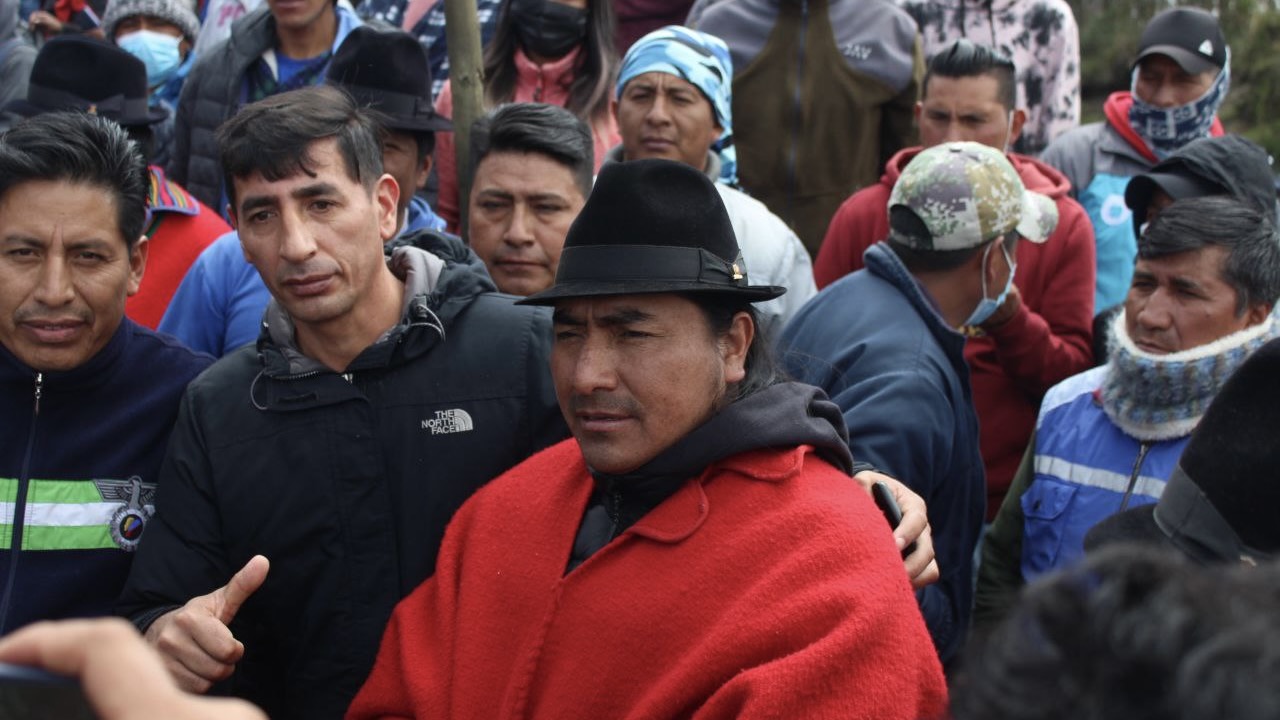 Leonidas Iza, the President of the Confederation of Indigenous Nationalities of Ecuador (CONAIE), was illegally arrested in the Pastocalle village in the Cotopaxi province in the early hours of June 14. Photo: Leonidas Iza/Twitter

The Confederation of Indigenous Nationalities of Ecuador (CONAIE), in the early hours of June 14, reported and condemned the arbitrary, illegal and violent arrest of Indigenous leader and the confederation’s president, Leonidas Iza Salazar, by the officials of the national police and armed forces of Ecuador in the Pastocalle village in the Cotopaxi province. CONAIE called on its members and associated organizations to undertake immediate protest measures “for the freedom of our leader and for the dignity of our struggle.”

During a press conference in the following hours, CONAIE’s Vice President Zenaida Yasacama, condemned Iza’s arrest and denounced the lack of information on his whereabouts. “We denounce the lack of information on the whereabouts of our highest representative, and we hold the national government responsible for any act that threatens his life and integrity,” she said.

Yasacama stressed that “with his illegal detention, the government makes it clear that it is a government that is not willing to listen to the people. In view of this, we call on all our associated organizations, Indigenous peoples and nationalities of Ecuador to radicalize the struggle at the national level in defense of our agenda of struggle and our highest representative.”

CONAIE’s Vice President also called on international human rights organizations “to remain vigilant in the face of this great act of violation of human rights and (the right to) social protest.”

She added that “together, in unity, women, men, territorial authorities, we will mobilize in every corner of the country. The struggle belongs to us all, they take one of us, they take us all. We are calling for an Indigenous uprising. Our voices, our feelings must be heard by the national government.”

The arrest came after the first day of an indefinite national strike, called by CONAIE among other Indigenous and peasant organizations, was a success. Thousands of protesters in at least 16 of the 24 provinces of the country blocked roads and mobilized in rejection of the neoliberal economic policies of the right-wing government of President Guillermo Lasso and the increasing insecurity in the country.

In the capital Quito, student organizations staged a massive march in support of the Indigenous organizations’ demands and in defense of public higher education. However, their peaceful mobilization was violently repressed by the security forces.

At around 1:20 am (local time), Lasso, accusing the protesters of vandalism, announced that the authorities were arresting the intellectual and material authors of the national strike, without mentioning CONAIE’ leader. At around 3:20 am, the national police reported that Iza had been arrested on suspicion of unspecified “offenses.”

Call for the national strike

Iza, the President of Ecuador’s one of the most powerful Indigenous organizations, said that the strike was called after the failure of discussions with the government. In 2021, the representatives met with government authorities on three occasions and presented their demands, but the government did not give them a response.

The national strike has also received the support of the National Union of Educators (UNE), the National Anti-Mining Front, among other social organizations and trade unions.

The demands of the organizations include: reduction and freeze of fuel prices; fair prices for their farm products; soft loans for farmers, small producers and merchants; better employment opportunities; access to education in rural areas at all levels; access to healthcare; total ban on mining and oil exploitation activities in Indigenous territories; respect for the collective rights of 21 Indigenous peoples and nationalities; an end to drug trafficking, kidnappings and violence; and an end to privatization of public companies.

The organizations also criticized President Lasso’s policy of bailing out banks and big businessmen, while 27% of the country’s rural population lives in extreme poverty. They demanded that a progressive tax be imposed on people with large fortunes to combat inequality.

On June 12, following Interior Minister Patricio Carillo’s statements that criminalized the call for the national strike and social mobilizations, the CONAIE had warned national and international human rights organizations against possible repression of the mobilizations by the government. Through a statement, the CONAIE said that Minister Castillo’s statements against the mobilization seek to confuse Ecuadorians by creating a scenario to justify the repression.

This morning, Ecuador’s Attorney General’s Office issued a statement regarding Iza’s arrest and said that it “learned of Iza’s arrest through social networks” and that “he has not been detained under the orders of this institution.” The statement added that “Attorney General Diana Salazar has issued guidelines to provincial attorneys to coordinate procedures … with the aim of avoiding illegal or arbitrary detentions.”

The Alliance for Human Rights Organization, an Ecuadorian NGO, condemned Iza’s detention as “illegal, arbitrary and unlawful.” Through a statement, the human rights organization criticized that “four hours after his arrest, his whereabouts remain unknown and he has not appeared before any competent authority in order to guarantee his right to legitimate defense and judicial protection.” The statement stressed that “Iza remains disappeared, incommunicado from his relatives and without legal sponsorship. During the procedure, as was recorded, he was not duly informed of the reasons for his detention or of his rights.”

Former Bolivian President Evo Morales also shared solidarity. “I express my solidarity with brother Leonidas Iza, President of the CONAIE, who was illegally detained in the early hours today. The struggle of the Indigenous Peoples is unceasing, Plurinational America is the future,” he tweeted.

A few hours ago, CONAIE reported that its legal team has filed Habeas Corpus for Iza’s immediate release. The organization emphasized that despite the abuse, the national strike continues.