The trend was visible from last year but the scale of profits reported by India’s listed companies after the financial year ended in March this year is nothing short of mind-boggling. According to latest data by CMIE or Centre for Monitoring Indian Economy, companies listed at the BSE (formerly known as Bombay Stock Exchange) have reported a collective profit of Rs.9.3 lakh crore (1 lakh crore rupees is approximately USD 12.8 billion) in 2021-22. This is over 70% more than the previous year and nearly three times more than the average profit earned every year for a decade before the pandemic, that is, between 2010-11 and 2019-20. (See chart below) 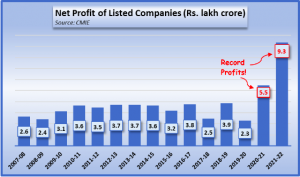 Even in the first year of the pandemic, 2020-21, the profit of these listed companies had touched a record of Rs.5.5 lakh crore, more than double the preceding year. But the profits accumulated in the second pandemic year have beaten all records.

These estimates are based on the financial statements of 3,288 listed companies that had published their statements for the quarter ended March 2022, by May 30, 2022. There are about 4,700 companies in all. CMIE says that the results of the remaining 1,500 companies are unlikely “to make a material difference to the analysis” because these 3,288 companies accounted for over 90% of the total sales of all listed companies in the previous quarter.

Earlier this year, a briefing by Oxfam had pointed out that during the pandemic (March 2020 to November 2021) incomes of 84% of households in the country declined but the number of Indian billionaires grew from 102 to 142 and their collective wealth increased from Rs. 23.14 lakh crore ($313 billion) to Rs. 53.16 lakh crore ($719 billion). More than 46 million Indians, meanwhile, are estimated to have fallen into extreme poverty in 2020 (nearly half of the global new poor, according to the United Nations.) “The stark wealth inequality in India is a result of an economic system rigged in favour of the super-rich over the poor and marginalised,” the study added.

The CMIE report is thus confirming what seems to be a bizarre but bitter reality – the pandemic has been fantastic for the corporate sector.

Why these super profits?

There appear to be several reasons behind this unprecedented profit-making. Of late, especially in the last quarter, increasing prices have helped jack up profits, although it reduced profit margins (profits as a share of sales revenue). Analyzing the last quarter, CMIE says that “raw material costs shot up by 40.1 per cent year-on-year; power and fuel costs were up even higher, by 47 per cent and purchase of goods was up by 30 per cent.” This means that the operating cost of companies increased. What did not keep pace was the wage bill, that is, the costs incurred by companies for payment of wages and salaries. The wage bill grew at a “relatively modest” 13.3%, according to CMIE data. If an average inflation of 7-8% is factored in, then the wage increase is meager.

This has happened because during the pandemic, a large number of workers were thrown out and all have not been re-inducted. New appointments are being given lower wages, and contractual labor has increased. This also implies that labor productivity would have increased, since a less number of workers are doing the same work. In short, labor has become cheaper and more work is being squeezed out of them. This is a sure-shot way of increasing profits, practiced everywhere in the world.

But merely cutting labor costs is not enough to explain the phenomenal increase in profits. There must be other factors at work too. What these factors are is something that is puzzling commentators.

It is clear that sales have increased dramatically in recent months compared with the earlier period of the pandemic. This is a process of returning to the normal. High prices combined with these higher volumes will mean higher profits.

Another factor is that the Narendra Modi government has provided a slew of tax cuts, rebates, concessions and exemptions, as also various debt restructurings and even cheaper credit, to the corporate sector during the pandemic. The cumulative effect of these is, perhaps, becoming evident in the bottom lines of corporate balance sheets now.

Tax Cuts and Other Concessions

The biggest gift given by the government to the corporate sector was the cut in corporate tax in 2019. The corporate tax rate was slashed from 30% to 22% (35% to 26% if surcharges etc included). In effect, this meant that the government gave a gift of an estimated Rs.1.45 lakh crore to the corporate sector. The government asserted that this would spur investment which would create more jobs, more demand, and ultimately boost the whole economy. As elsewhere in the world, nothing of this happened – the jobs situation continued to worsen, investment too remained patchy. But, meanwhile, the bounty has helped boost corporate profits, evidently.

It must be mentioned that the Modi government has been very kind to the corporate sector consistently, even apart from the corporate tax cut. Between 2014-15 and 2020-21, the Modi government gave various rebates, concessions and waivers worth Rs.6.15 lakh crore to corporate tax payers, called ‘tax incentives’, according to Union Budget documents (available in Annexure 7 of the Receipts Budget). These were earlier known as ‘revenue foregone’ which was a better description.

Similarly, Rs 10.72 lakh crore worth of loans have been written off by banks, mostly public sector banks, which presumably act on the directives of the government. Of this, as much as Rs.2.03 lakh crore was written off during the first year of the pandemic, 2020-21. That’s the last year till which data is available.

The Modi government has also created the most conducive atmosphere for corporates, again especially during the pandemic years. This included passing the four Labour Codes that establish hire and fire as an acceptable policy for employers, fixed term (or contractual) employment, changes in the way minimum wages can be calculated, and almost complete dismantling of the monitoring machinery for compliance with labor laws.

Although the rules are yet to be framed by State governments under these new Codes because of strong resistance from workers, but using the cover of pandemic, many State governments went ahead and issued sweeping notifications or ordinances suspending various labor rights.

A combination of these gifts from the government has had the desired effect of boosting profits to unheard of levels. Inevitably, it has also led to deepening inequality, decimation of purchasing power of people due to low wages, and relentless unemployment. How the government will deal with the blowback of this remains to be seen. 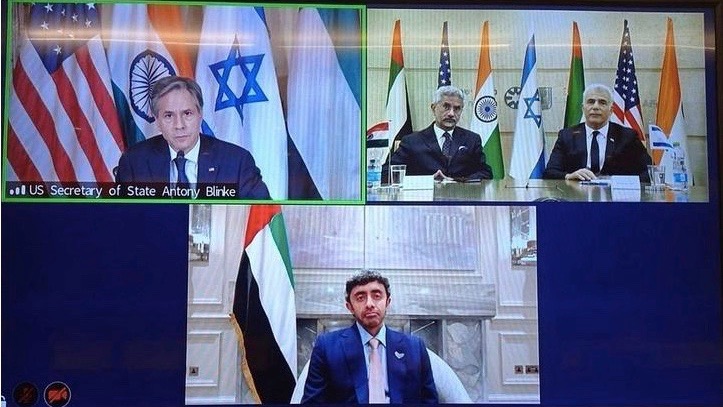