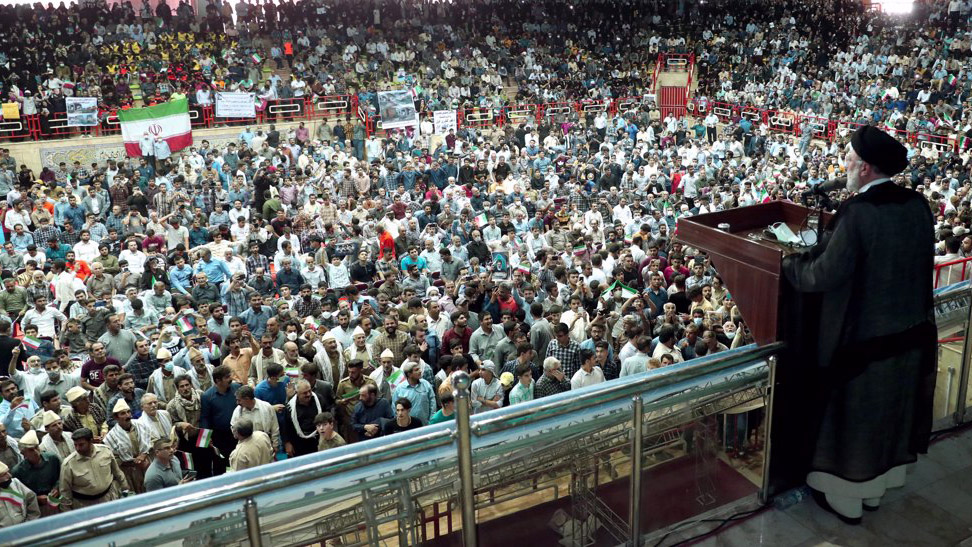 Speaking in a public gathering during his visit to the northwestern province of Khermanshah, Raeisi asserted that “any mistake by the Americans and their allies in the region, and the world will be met with a harsh response that will make them regret it.” (Photo by President.ir, via PressTV)

Following the signing of a a joint strategic declaration on July 14 by the US and Israel focused on preventing Iran from acquiring nuclear weapons, Iranian president Ebrahim Raeisi said that Iran will not tolerate any “mistake” by the US and its allies in the West Asia region, and will respond harshly to provocation.

Raeisi’s comments were made in a public gathering during his visit to Iran’s northwestern province of Khermanshah. He asserted that “any mistake by the Americans and their allies in the region and the world, will be met with a harsh response that will make them regret it.”

He also blamed the US and its allies in the region for “transiting instability and terrorism,” asserting that the Zionist regime of Israel “will never have normal relations in the region”.

The joint strategic declaration signed by US President Joe Biden and Israel’s caretaker Prime Minister Yair Lapid is officially known as the “Jerusalem US-Israel Strategic Partnership Joint Declaration,” and it states that the US will never “allow Iran to acquire a nuclear weapon, and that it is prepared to use all elements of its national power to ensure that outcome.”

Biden also claimed in an interview to Israeli N12 News that he is ready to use force “as a last resort” to keep Iran from acquiring nuclear weapons. However, he emphasized that the US will first pursue a diplomatic path to achieve this goal.

Disagreeing with Biden’s emphasis on dialogue and diplomacy during a press conference after the signing of the joint declaration, Lapid asserted that “the only way to stop [Iran from acquiring nuclear weapons] is to put a credible military threat on the table,” claiming that, “words or diplomacy will not stop” Iran.

Biden reiterated “an ironclad commitment from the United States of America to Israel’s security”.

Criticism of Biden’s threat to use force

Reacting to the deal, Nasser Kan’ani, spokesperson of Iran’s foreign ministry, wrote on Twitter that, “the aim [of the joint declaration] is not just Iran, but rather, Arab and Islamic countries.” He claimed that the US wants countries of the region to “always bow to the zionist regime’s superiority.”

Kan’ani also claimed that the US’s unconditional support of Israeli aggression in West Asia will prevent all attempts to establish stability.

Biden’s threat to use force against Iran has invited widespread criticism. Calling the threat a “gigantic mistake,” peace activist Medea Benjamin of US anti-war organization CODEPINK reminded Biden of his own critical stance when predecessor Donald Trump withdrew from the Iran nuclear deal in 2018.

Iran is a signatory of the Nuclear Non-Proliferation Treaty (NPT), and has repeatedly claimed that its nuclear program is only for peaceful purposes, and that it does not want to develop a nuclear bomb as it is against the values of the Islamic republic.

Reminder: The US is a nuclear armed state that dropped two nuclear bombs on two civilian cities. It also subverted the #Iran nuclear deal.

Israel is a nuclear armed state that is militarily occupying a people, & lobbied the US to subvert the Iran nuclear deal.

Some are calling the US’ enthusiasm for Israeli security hypocritical, considering that Israel is one of only four countries in the world (India, Pakistan and North Korea being the other three) which have nuclear weapons outside the ambit of the NPT.