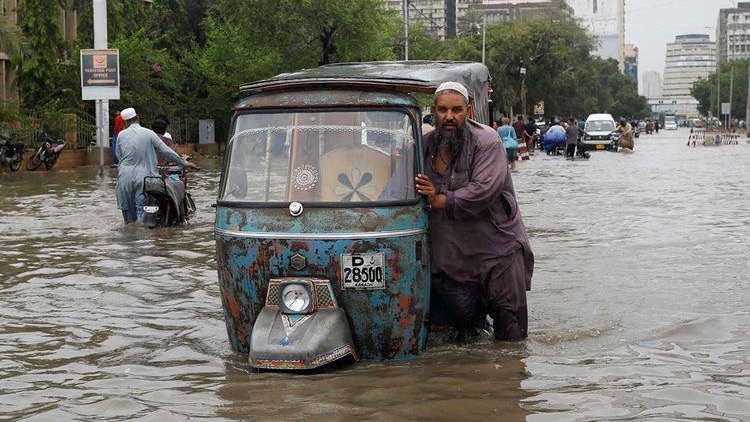 In Pakistan, monsoon rain continues to wreak havoc, causing flash floods in several parts of the country. The floods have caused massive damage to life, livestock and livelihoods. Out of the four provinces of Pakistan, Balochistan and Khyber-Pakhtunkhwa have witnessed the highest number of flood-related deaths. The death toll since June 1 in Balochistan alone is 136, according to the figures provided by the Provincial Disaster Management Authority (PDMA).

Rains and flash floods in Balochistan since June have killed at least 100 + people including 34 children and 30 women while damaging more than 4,000 homes.

Meanwhile, 706 livestock animals have also been killed in floods. pic.twitter.com/nOvU2vg0f6

Another footage of the scary flashflood that hit #Kohistan yesterday.

No loss of life was reported as a result of this flood.

Such sights have recently become a routine in the mountain areas of #Pakistan. #ClimateCrisis #ClimateEmergency #ClimateAction pic.twitter.com/DM4O7FAuvh

While the death toll from flooding continues to rise, the Pakistan Meteorological Department (PMD) has predicted more “above normal” rains in most parts of the country during August. It has also highlighted that extreme hydro-meteorological events could trigger sudden snowmelt on higher ranges and riverine floods in the catchment areas.

On Tuesday, August 2, as torrential rain continued to destroy houses and infrastructure, the death toll from flash flooding in Balochistan rose by 15. With nearly 50 villages submerged, around 13,535 houses have been destroyed in the province, of which 10,129 are partially damaged and 3,406 were completely destroyed. Two dams located in the Toba Kakar mountain range have also collapsed.

The extensive damage caused by the heavy monsoon rains in Balochistan is all the more alarming due to the lack of development in the region. Not only houses, road connectivity has been severely impacted. Roads that link remote and mountainous districts of the Khyber-Pakhtunkhwa region have also been severely affected. In the northernmost Gilgit-Baltistan region, on July 22, landslides caused by flash floods, coupled with a glacial lake outburst, blocked the Karakoram Highway and damaged scores of vehicles.

Since this is the middle of the Kharif (summer harvesting) season in Pakistan where farmers are primarily dependent on the monsoon rains like the rest of South Asia, the continuous rains have destroyed crops and inundated fields. As per the statistics shared by the PDMA, floods have destroyed standing crops on more than 200,000 acres of land in various parts of Balochistan. The financial loss to date for fruit farmers in the province is estimated at around 2 billion Pakistani rupees, a government official told The Dawn.

Prime Minister Shehbaz Sharif who visited the flood-affected areas in Quetta, the provincial capital and largest city of Balochistan, on July 30, has announced compensation worth 1 million in Pakistani rupees to the affected families.

Initial videos coming in of devastation caused in #Uthal, #Balochistan and other parts of the province.#SaveUthal #SaveBalochistan #Floods #Pakistan #Monsoon pic.twitter.com/ow1ggju6Mr

About 300 including 124 people from Balochistan have lost lives in the floods. Although there is no compensation for huaman life, the federal govt is paying Rs. 10 lakh to every household of the deceased. I have also ordered increase in financial assistance for damaged houses https://t.co/2Pf7y1qrix

The country’s military, navy, and air force have been deployed for rescue efforts. On August 1, one Pakistani army helicopter crashed in the Lasbela region of Balochistan during a flood relief mission, killing six on board.

Pakistan, which is one of the countries most affected by the impact of climate change, was ranked eighth in the Global Risk Climate Index 2020. Following a prolonged heatwave that commenced in March this year, unusually heavy monsoon rains have caused widespread damage to the lives and livelihoods of the most vulnerable sections of Pakistani society. With their crops damaged and houses submerged under water at a time when the economy is weak, prices are rising, and fresh cases of COVID-19 are being reported, victims of these floods face many challenges which ad-hoc relief measures cannot resolve.