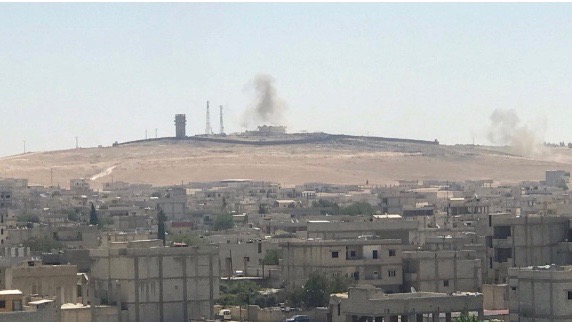 Turkey continued its shelling and airstrikes in northern Syria on Wednesday, August 17, creating possibility of a full-fledged war in the region. At least four people, including three Syrian soldiers and a child, were killed in similar attacks on Tuesday, according to local media reports.

Syrian Arab News Agency (SANA) reported that three Syrian soldiers were killed and six others were wounded in Turkish air raids in the Aleppo countryside on Tuesday. According to Hawar News Agency, which is linked with the Syrian Democratic Forces (SDF), a 14-year-old boy named Abid Mohammad Haji was killed and five others were injured in another attack on villages near the Kurdish-dominated Kobane city (Ayn al-Arab) on the Turkish border in Aleppo province.

SANA quoted Syrian army claims that it responded to Turkish aggression and “inflicted human and material losses to the aggressors.” According to Turkish state media Anadolu Agency, at least one Turkish soldier was killed and four others were injured in an attack on its border post. It did not specify the source of the attack.

Dozens of Syrians have been killed and thousands have been forced to migrate due to continued Turkish aggression in northeastern Syria for the last several weeks. Turkish aggression has also caused massive damage to civilian infrastructure in Aleppo and Hasaka provinces, which are already suffering due to the decade long war in the country.

According to another SANA report on Wednesday, local authorities have failed to provide essential water supplies to the Ras al-Ayn city in Hasaka province due to continued attacks by Turkish-backed militias and shelling from across the border for the last 15 days.

Turkish forces have controlled Ras al-Ayn since October 2019 when they launched an attack to create a 30 kilometer deep “security zone” inside Syria.

Turkey has also invaded neighboring Iraq, killing scores of people there and displacing thousands of civilians. Both Iraq’s central and northern regional governments have demanded immediate withdrawal of Turkish forces from the country.

Northeastern Syria and northern Iraq are both Kurdish-majority regions. Turkey alleges that cadres of the Kurdish Workers Party (PKK), a militant group fighting against the persecution of the Kurdish minority in Turkey, is being sheltered in the region in order to launch attacks inside Turkey. Turkey and some of its NATO allies have banned the PKK as a terrorist organization.

Turkish President Recep Tayyip Erdogan had announced earlier this year that his country will re-launch its invasion in northern Syria, despite domestic criticism. Russia and the US, guarantors of a ceasefire agreement signed in 2019 following the Turkish invasion, and Iran have appealed to Turkey to refrain from such an attack again, claiming that it may lead to fresh regional instability.