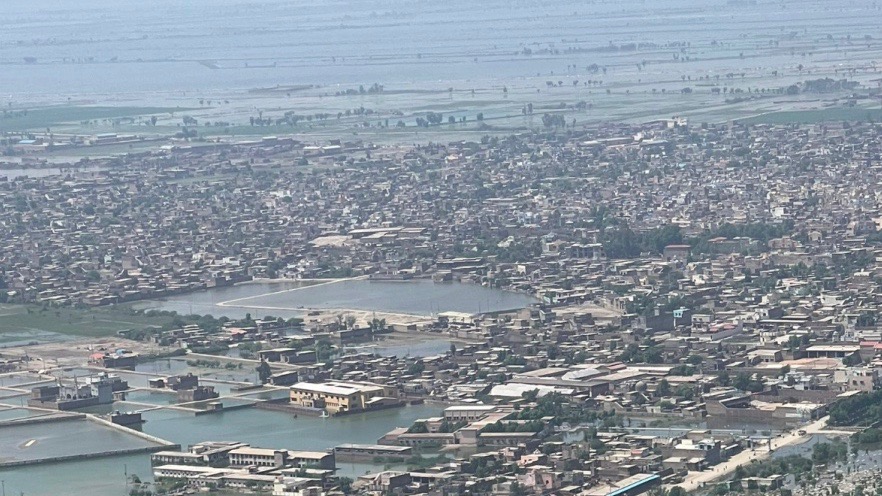 Floods have devastated Pakistan this year, with 33 million people affected and more than 1,200 killed. Rivers breaching their banks coupled with the bursting of glacial lakes inundated almost one-third of the country, causing a massive economic loss. Recovery from such calamities is a long process, and Pakistan will also have to face the same fate. Along with the efforts to mend the losses, it is also essential to examine the factors that have led to such a disaster.

According to researchers, a combination of several factors that linked with global warming and climate change gravely worsened Pakistan’s flooding .

The first contributor to Pakistan’s mayhem is the extreme heat waves.

In many places, the temperature soared to 40 degrees Celsius for an extended period; it reached 51 degrees Celsius in Jacobabad in May. These are unprecedented heat waves. Pakistan’s former Minister of Climate Change Malik Amin Aslam said in a statement, “These were not normal heatwaves — they were the worst in the world. We had the hottest place on Earth in Pakistan.”

“Meteorologists warned earlier this year that the extreme temperatures would probably result in ‘above normal’ levels of rain during the country’s monsoon season, from July to September,” Zia Hashmi, a water resource engineer at the Global Change Impact Studies Centre in Islamabad, said in a statement.

The prolonged heat waves not only caused the air to capture more moisture and led to heavier rain but also had a dangerous impact on the glaciers.

Pakistan’s northern region has so many glaciers that sometimes it is called ‘the third pole.’ Pakistan’s northern region contains more glacial ice than anywhere else, barring the poles. This year’s prolonged heat wave caused the melting of many glaciers, which eventually made more water flow into the country’s river system. The tributaries swelled and dumped a heavy amount of water into the Indus river.

The Indus is the largest river in Pakistan, running through the middle of the country from the north to the south, feeding towns, cities, and agricultural land before it meets the Arabian sea.

According to Athar Hussain, a climate scientist at the COMSATS University in Islamabad, during his visits to some of the glaciated regions in higher altitudes in July, he noticed muddy water with a high current flowing in the Hunza river which is a tributary of the Indus. According to Hussain, the muddy water indicates rapid glacier melting as water flowing downstream at a fast pace picks up sediments along.

In addition, a BBC report said that glaciers up in Gilgit Baltistan and Khyber Pakhtunkhwa regions are melting fast, creating some 3,000 lakes.

Among these, 33 lakes are at high risk of sudden bursting, which, if it happens, will unleash millions of cubic meters of water along with debris inundating large swathes of the country. Estimates say that this could put over seven million people at risk.

There are other factors which added to Pakistan’s woes. The heat waves coincided with an extraordinary depression, the development of intense low air pressure in the Arabian Sea. This depression brought heavy rain to the coastal provinces early in June. According to Hussain, such large-scale depression systems are not something Pakistan usually experiences. The unusual events, coupled with the early arrival of monsoon rain, worsened the situation in Pakistan.

Notably, Pakistan received almost double its average annual rainfall this year. The rains in southern provinces, including Sindh and Balochistan, were more than five times the average. Overall, Pakistan received 390.77 mm of rains from June to August, which is nearly 190% more than usual, BBC reported.

Fahad Saeed, a climate impact scientist, pointed out that the scale of rain and flood in Pakistan would prove disastrous for any country, even a richer one. He said, “This is a different type of animal – the scale of the floods is so high, and the rain is so extreme that even very robust defenses would struggle.”

Experts believe that the convergence of all these factors that brought Pakistan’s mayhem is linked to climate change.

Notably, Pakistan has witnessed a rise in temperature by 0.3 degree Celsius per decade from 1952-2009. The floods in Pakistan are considered a wake-up call to the world as far as the threats of climate change are concerned.

However, there is another angle to it. Many in Pakistan felt a sense of climate injustice because Pakistan contributes less than 1% of the global emission of greenhouse gases. But the sensitive geo-ecological positioning of Pakistan makes it extremely vulnerable to the threats of climate change, which probably have manifested this year.