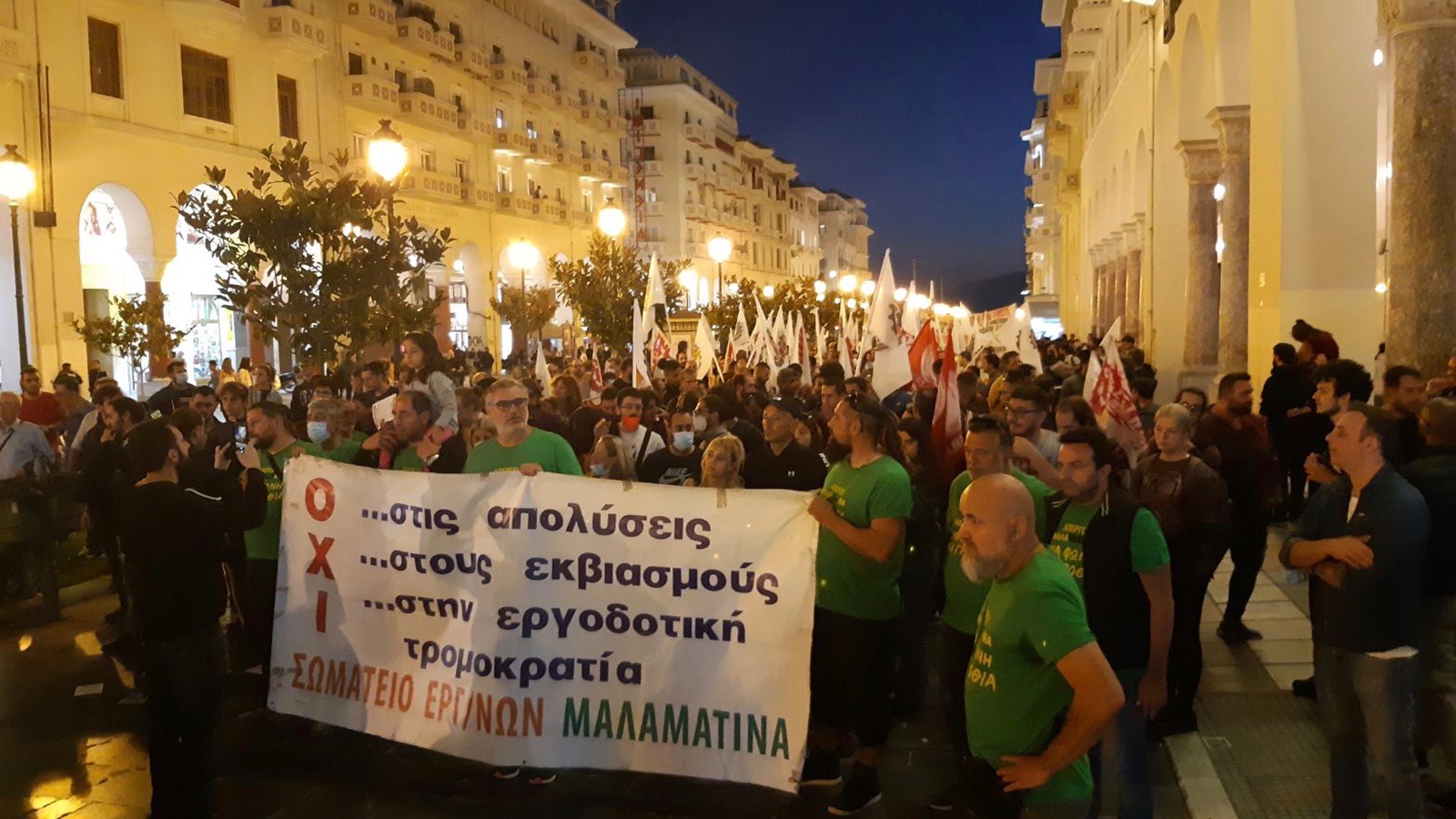 Mobilization in Thessaloniki on October 7. (Photo: via 902.gr)

Working class sections across Greece have intensified protests against the termination of jobs and persecution of workers by employers and the state. On Sunday, October 9, a concert by the Panhellenic Music Association was organized at Th. Malerdou Square in the city of Larymna in solidarity with the workers of the state-owned General Mining and Metallurgical Company (LARCO) who have been fighting against the privatization of the company and demanding its reopening and full operationalization.

On October 7, trade unions in Thessaloniki had organized a massive demonstration in solidarity with persecuted workers of the Malamatina Winery and the Hellas Gold mines. Meanwhile, the All Workers Militant Front (PAME) denounced the conservative New Democracy (ND)-led government’s bid to persecute the president of the Association of Hospital Doctors of Greece (OENGE), Afroditi Retziou, for organizing protests in the health sector. Working class sections have called for a general strike on November 9 demanding increases in wages and pensions, collective agreements, and concrete measures to tackle the cost of living crisis.

The working class in Greece has been struggling against the government over its pro-employer and anti-worker policies. With the labor reforms brought in by Labor Minister Kostis Hatzidakis, employers in many parts of the country have been persecuting workers who are involved in struggles and unionization. Several workers of the Malamatina Winery plant in Thessaloniki, who are waging a militant strike demanding a collective labor agreement, were dismissed by the management. Workers of LARCO have been resisting the government’s bid to privatize the company for the past three years. Now, with the onset of the cost of living crisis triggered by the Russia-Ukraine war, working class sections are struggling to make ends meet.

With regard to the general strike on November 9, PAME stated, “behind every labor problem and impasse, behind poverty, repression, auctions, war, the cause remains the same and unchanged. It is the insatiable thirst for the profits of business groups! That is why they protect the profitability of the black marketeers of energy, and at the same time they strengthen and intensity exploitation and repression.”

PAME has demanded the government increase the minimum wage to 825 euros (USD 802.48) per month in the private sector, along with a 20% increase in the public sector.

PAME has also set forth a set of proposals to tackle the cost of living crisis, including (1) reduction and cap on the price of electricity and gas; (2) abolition of excise duty and VAT on oil, petrol, natural gas and electricity; (3) reduction and cap on prices of basic consumer goods such as food (e.g. milk, flour, oils, fats), clothing, and so on; (4) establishment of lower guaranteed prices for agricultural products and measures to reduce production costs; (5) abolition of VAT on basic items of general public consumption; (6) affordable and adequate electricity, water, telephone provisions for working class households; (7) cancellation of debts for working-class households and professionals; (8) expansion of the criteria for inclusion in the Social Residential Tariff and the heating allowance, increase of the family income criterion to 30,000 euros (USD 29,181); (9) reintroduction of free routes in urban transport for employees at the beginning and end of shifts, reduction of the ticket price in public transport by 50%; (10) free transportation for pupils, students, unemployed, people with disabilities and pensioners; and (11) rent subsidy for working-class households, students and small businesses, broadening of the inclusion criteria and increase of the subsidy, among others.