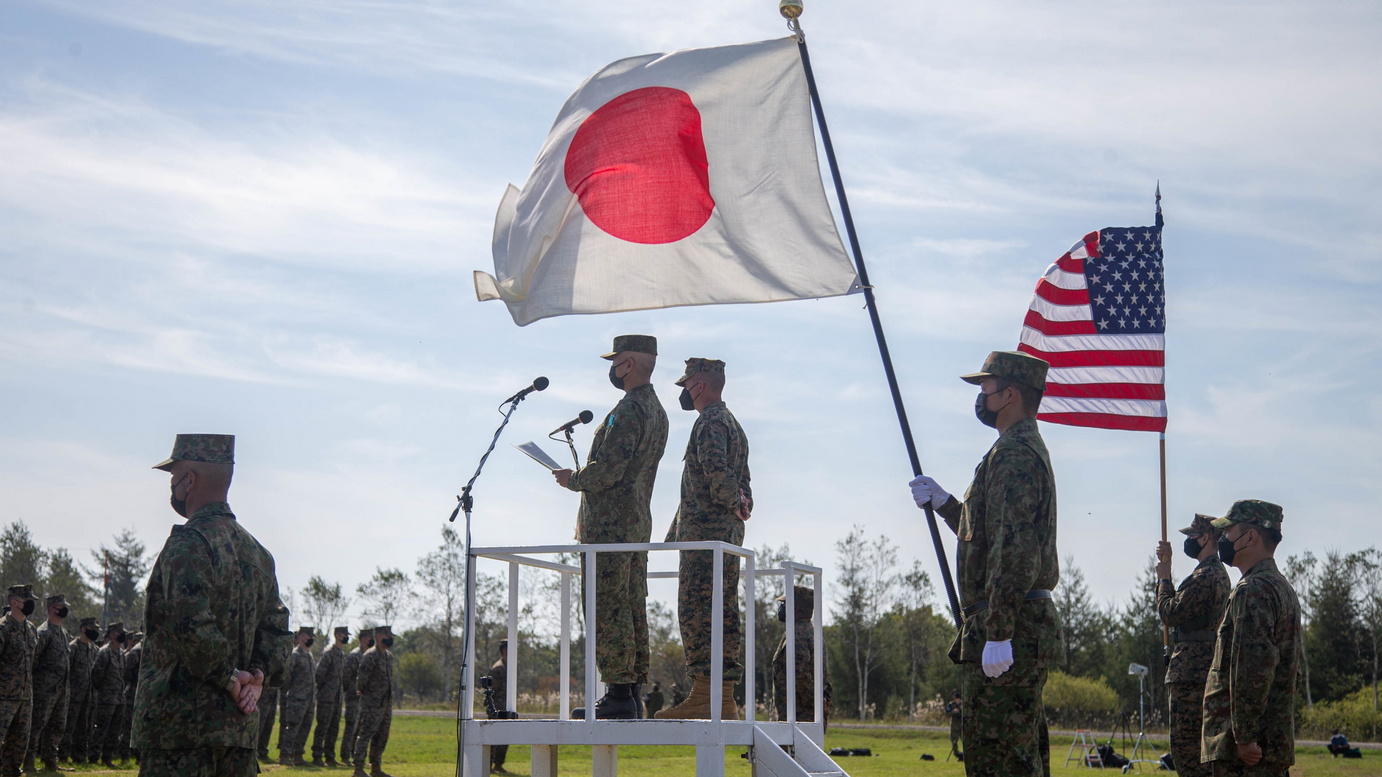 In early October 2022, Japan’s Self-Defense Force joined the US armed forces for Resolute Dragon 2022, which the US Marines call the “largest bilateral training exercise of the year.” Major General Jay Bargeron of the US 3rd Marine Division said at the start of the exercise that the United States is “ready to fight and win if called upon.” Resolute Dragon 2022 followed the resumption in September of trilateral military drills by Japan, South Korea, and the United States off the Korean peninsula; these drills had been suspended as the former South Korean government attempted a policy of rapprochement with North Korea.

The Constitution of Japan (1947) forbids the country from building up an aggressive military force. Two years after Article 9 was inserted into the Constitution at the urging of the US Occupation, the Chinese Revolution succeeded and the United States began to reassess the disarmament of Japan. Discussions about the revocation of Article 9 began at the start of the Korean War in 1950, with the US government putting pressure on Japanese Prime Minister Shigeru Yoshida to build up the army and militarize the National Police Reserve; in fact, the Ashida Amendment to Article 9 weakened Japan’s commitment to demilitarization and left open the door to full-scale rearmament.

Public opinion in Japan is against the formal removal of Article 9. Nonetheless, Japan has continued to build up its military capacity. In the 2021 budget, Japan added $7 billion (7.3%) to spend $54.1 billion on its military, “the highest annual increase since 1972,” notes the Stockholm International Peace Research Institute. In September 2022, Japan’s Defense Minister Yasukazu Hamada said that his country would “radically strengthen the defense capabilities we need….To protect Japan, it’s important for us to have not only hardware such as aircrafts and ships, but also enough ammunition for them.” Japan has indicated that it would increase its military budget by 11% a year from now till 2024.

In December, Japan will release a new National Security Strategy, the first since 2014. Prime Minister Fumio Kishida told the Financial Times, “We will be fully prepared to respond to any possible scenario in east Asia to protect the lives and livelihoods of our people.” It appears that Japan is rushing into a conflict with China, its largest trading partner.