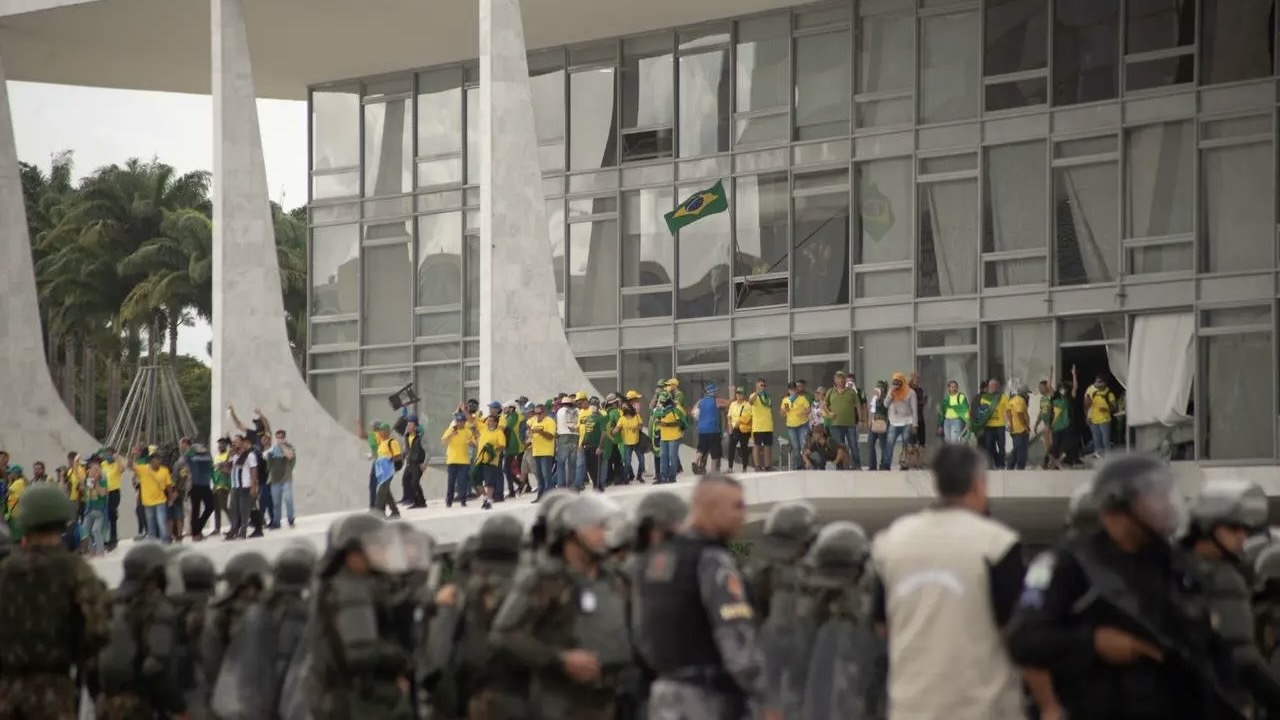 Supporters of the former president Jair Bolsonaro invaded the Supreme Federal Court, National Congress, and the Planalto Palace, the office of the president, this Sunday January 8, breaking through the blockade of the Military Police and the National Security Force of the Esplanade of Ministers in Brasília.

The Planalto Palace, where the cabinet of the President also works from, was one of the key targets of the Bolsonaristas. According to CNN, there were members of the government in the building, that awaited rescue inside.

Dozens of buses had arrived on Saturday January 7 to the Federal District to carry out the coup actions. Estadão estimated that 100 buses and approximately 3,900 people had traveled to the capital.

On Saturday January 7, the Minister of Justice and Public Security Flávio Dino had authorized the use of National Force as security in the capital in light of the threat of violent actions.

“In addition to all of the federal forces available in Brasilia, and of the constitutional action of the Governor of the Federal District, we will also have the help of the National Force in the next few days. I just signed an act authorizing its action in the face of threats carried out against democracy,” the minister had written on Twitter.

Flávio Dino had also previously affirmed that those who financed the illegal protests would be punished. “The taking of power can only take place in 2026, in new elections,” the minister highlighted.

In an interview with CNN on following the attacks, Luciano Bivar, vice-president of the Chamber of Deputies, said that he spoke with the president of the body, Arthur Lira, and with Anderson Torres, former minister of justice, and current Secretary of Public Security of the Federal District. Torres confirmed that the Military Police would send back-up and that new contingents were sent to the area.

“Unfortunate developments right now in the Ministers Esplanade. I called on the operations sector of the Public Safety of the DF to take immediate measures to reestablish order in the center of Brasilia,” wrote Anderson Torres on Twitter.

An hour after the coup attempt, President Lula gave a press conference to condemn the situation and announce the response of the government to the actions. After criticizing the complicity of Brasilia’s public force in the coup attempt, he announced he was signing a decree for the federal intervention in public security of the Federal District until January 31. The announcement was made in Araraquara, São Paulo where the president was visiting to survey the impact of torrential rains in the region.

Lula told the press, “Those people that we call fascist, that are everything that is abominable in politics, invaded the seat of government, they invaded the Congress, and they invaded the Supreme Court. As true criminals and destroying everything they found in front of them. We believe that there was a lack of security. And I want to tell you, that all of the people who did this will be found and punished. They will see that democracy guarantees the right to freedom and free expression, but demands that people respect institutions.”

“The criminals, that we can call fanatic nazis, fascist fanatics, did what has never been done in the history of the country. The Brazilian left has already had people be tortured and killed, and you have never read about a left movement invading the Supreme Court, Congress, or Planalto. What they did is unprecedented. We are going to find out who are the people that financed these criminals that went to Brasilia. They will pay with the force of the law for holding responsibility in these anti-democratic acts, actions of vandals and fascists,” he declared.

Hours after the coup attempt by his own supporters, the former president Jair Bolsonaro, who fled to Florida on December 30, 2022, has yet to make a comment about the situation.

On social media, the Chief of Staff of the Bolsonaro government did not condemn the actions but called for “balance and sense” of the invaders and declared “democracy is strengthened in the contradiction and respect of differences.”

Former vice president and current senator Hamilton Mourão is also yet to make a statement.