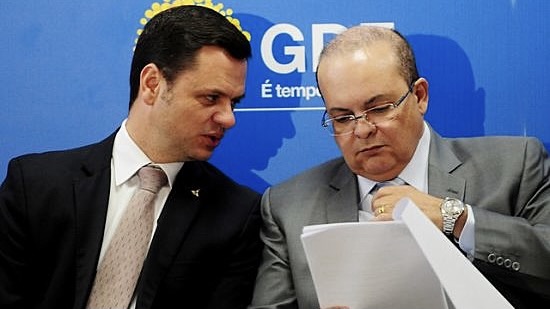 The governor of the Federal District, Ibaneis Rocha (MDB) could be considered one of the people directly responsible for the scenes of vandalism in Brasilia (DF) on the afternoon of Sunday January 8. The position has been expressed by political leaders and leaders of people’s movements who have publicly rejected the invasion of the Supreme Federal Court, the National Congress, and of Planalto Palace.

Brasil de Fato explains the five key motives that make Ibaneis one of the key people behind what happened today in the federal capital. The first is because he designated Bolsonaro’s former Minister of Justice, Anderson Torres, as the secretary of Public Security of the Federal District.

The ex-minister of Bolsonaro was one of the members of the cabinet that was most radical and most loyal to the former president, even in the face of successive attacks to democracy and the Democratic Rule of Law. Before his role in the federal government, he had already worked in the government of the Federal District, also with Ibaneis.

Governor Ibaneis Rocha named, last Monday January 2, Anderson Torres to lead the secretary of Public Security-DF. The designation was made official one day after President Luiz Inácio Lula da Silva was sworn in.

The name of the close ally of Bolsonaro was not published in the first batch of nominations on Sunday January 1 because he did not help with the security scheme during Lula’s swearing in.

Among the innumerous images on social media of the Bolsonarista terrorists, one catches the eye: military police of the Federal District escorting and guiding the coup supporters towards the Plaza of the Three Powers.

Coup supporters broke through the blockade of the Military Police on the Esplanade of Ministers at around 15h with a noted lack of resistance by the professional security force. There was a brief attempt to impede the invasion using pepper spray, but it was not sufficient, considering the small amount of police present.

The Bolsonaristas then knocked down the barrier protecting the area and walked towards National Congress. The response of the police was highly criticized on social media.

While Brasilia’s public buildings was being invaded by coup supporters, Anderson Torres, the minister of Public Security of the Federal District, is in the United States. According to the newspaper, O Estado de S. Paulo, Torres traveled to Orlando, the same place where Bolsonaro is. He accepted the position last week and already went on vacation.

5) Afternoon off on the eve of coup attempt

According to the information of the official agenda of the Buriti Palace, on Friday January 6, the last working day before the scenes of terrorism, Ibaneis Rocha took the afternoon off. He participated in only two meetings, the last one before midday. After this, he didn’t work.