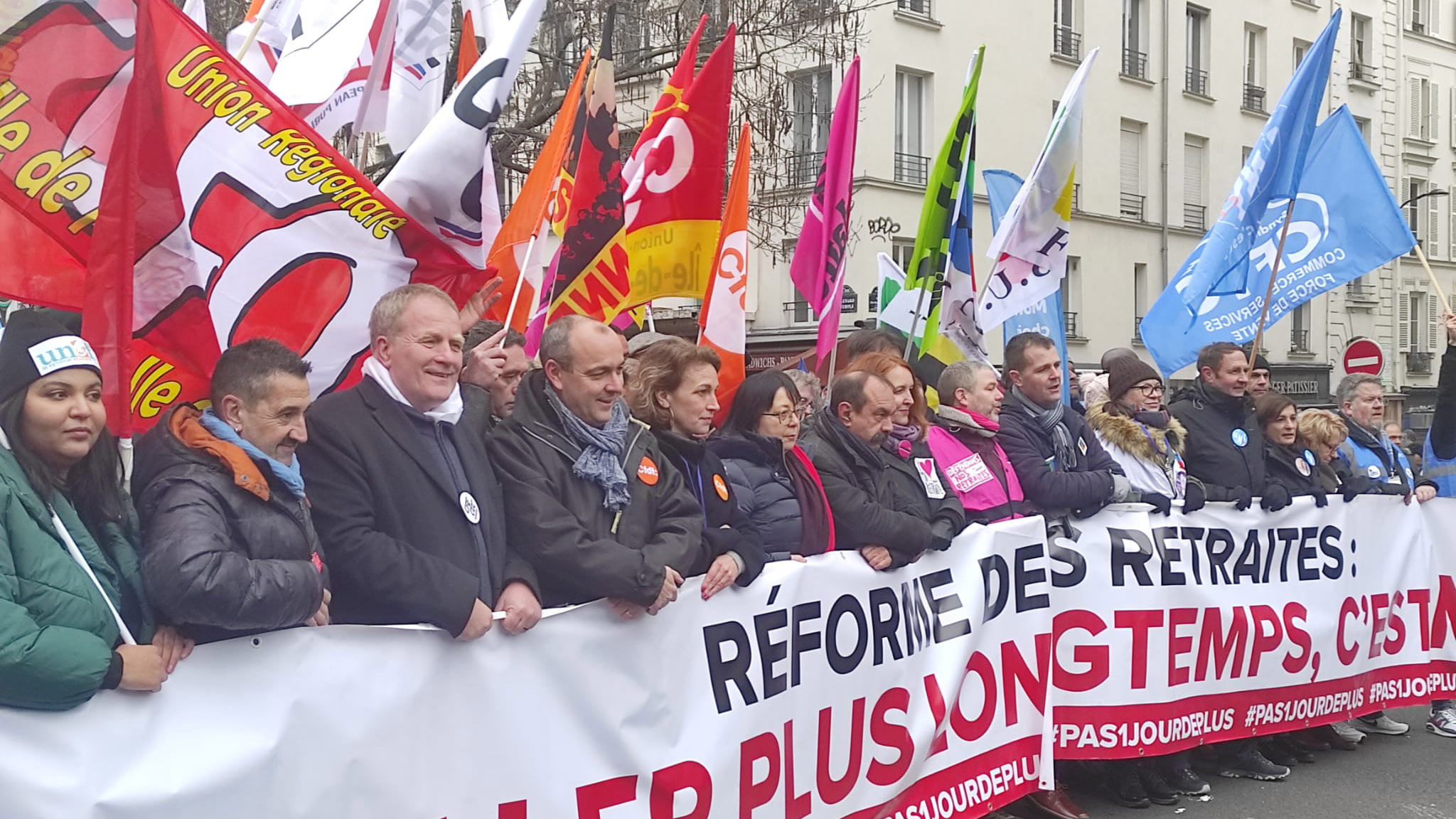 Demonstrations and strikes began in France on Thursday, January 19, as President Macron pursues his bill to raise the legal retirement age to 64 years. Trade unionists estimate that by noon local time, approximately one million people across the country had taken to the street to oppose the bill. By the end of the day, almost two million people participated in protests in different cities, with 400,000 marching in Paris alone, according to approximations from the General Confederation of Labour (CGT).

Macron’s proposal is part of an attempt to adapt the Social Security Finance Bill, a discussion that the French Parliament will tackle from January 29 until March 26. In case the government does not back down from its plan, mobilizations are certain to expand and continue throughout the duration of the parliamentary debate. The next strike has already been announced for January 31.

According to the trade unions’ estimate, the support for the mobilization reached the one experienced during the strikes of 1995, which brought most parts of the country to a half in an attempt to stop then-Prime Minister Juppe’s plan to introduce extensive austerity measures.

The collective “Our Health is in Danger” against the pension reform

The Social Security Finance Bill adopted at the end of 2022 already implies the throttling of the health and social systems, which is burdened by persistent underfunding, conservative economic plans, and austerity policies.

The health system faced an unprecedented crisis in emergency and pediatric services this winter, including numerous closures of services, due to a lack of personnel. A massive number of workers left their jobs in the health and social sectors because of the arduousness of the working conditions which accompanied the COVID-19 pandemic, including the discrimination against employees who have not been vaccinated and who have not been reinstated to their posts. The personnel crisis has also a lot to do with the lack of sufficient training of medical, paramedical, and social workers.

The collective “Our Health is in Danger”, together with other associations, trade unions and political parties, is calling for mobilizations against the pension reform, and linking this issue to the issues of health, as well as the defense of public health, social action and solidarity-based social security at the service of the population.

Françoise Nay, one of the spokespersons of the collective, points out that the reform would only deepen the profound health and life expectancy inequalities that already exist between workers in different sectors, often linked to the arduousness of work.

According to the French National Institute of Statistics and Economic Studies (INSEE), male executives live on average 6.3 years longer than blue-collar workers. The latest studies also show that workers also spend more years with disabilities. In France, 4.3 million people work at night—night shifts have been associated with a loss of 5 years of life for every 15 years.

For Maryline Ricci, a social worker and member of the People’s Health Movement and SUD Santé Sociaux, the battle over the pension reform is part of the wider struggle to improve physical, mental and social well-being, and as such is an essential determinant of health.

Véronique Bâcle, Deputy Secretary General of the National Union of Occupational Health Professionals (SNPST), which also supports the mobilization against the pension reform, says, “Imposing longer contribution periods and raising the retirement age will only worsen the state of workers’ health and social inequalities.”

Women have 40% lower pensions than men

If passed, the reform would also worsen existing inequalities between working men and women. Women already receive on an average 40% lower pensions than men. For Nora Tenenbaum, member of the National Coordination of Associations for the Right to Abortion and Contraception (CADAC) and of the National Collective for Women’s Rights, the situation is likely to get worse with the planned reform.

This is why feminist organizations are resolutely calling for mobilization against Macron’s reform, as well as for the recognition and a significant pay raise in professions with a majority of women workers—such as health and social care. At the same time, they are preparing a feminist strike on March 8, which will correspond with the parliamentary debate.

Strengthening the pensions strike and building a unitary process

As the mobilization against the pension reform grows, the struggle is becoming more and more linked to those fighting for a strengthened health and social security system, and who are keen to build a unitary process for social justice in France.

This includes the feminist strike on March 8, together with possible actions during the week of April 7, the international day of action against the commercialization of health, and an initiative for the strengthening of public services, called “Springtime for Public Services”, to be held in Lure from May 12 to 14.