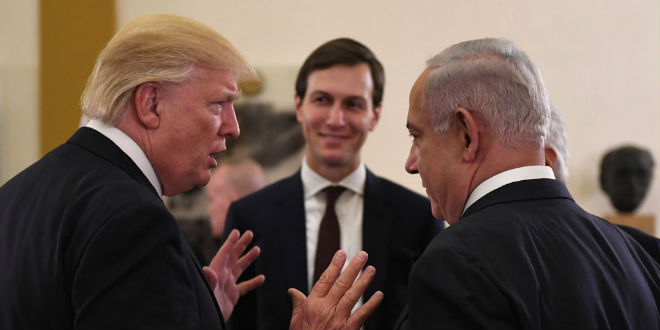 Trump's decision to shift the US embassy in Israel to Jerusalem was widely condemned. Photo: Breaking Israel News

US President Donald Trump, while speaking at a political rally in West Virginia on Tuesday, patted himself on the back for taking Jerusalem “off the table” in the West Asia peace process by shifting the US embassy in Israel to the city. This is despite the fact that the move was accompanied by an Israeli massacre of Palestinian protesters, and was condemned across the world.

Saying that move was good for peace, since in past negotiations, Jerusalem had always been one of the stumbling blocks, he said that it was now the Palestinians’ turn to “get something good” and Israel’s turn to “pay the price.” The next day, however, US national security adviser John Bolton said the president’s comments did not imply a “quid pro quo”, and that he expected the Palestinians to give up their demand for East Jerusalem as their capital.

The Trump administration moved the US embassy to Jerusalem on May 14, a day before Nakba day, when Palestinians mark the the expulsion and eventual displacement of more than 750,000 of their people during the formation of the state of Israel.

The embassy move was immediately met with protests and strikes by Palestinians in Gaza, the West Bank and East Jerusalem. 60 Palestinians were killed at the Gaza border by the Israeli military as the opening ceremony was taking place.

Palestinian leaders unanimously rejected and condemned Trump’s statement. Palestinian negotiator and PLO Executive secretary general Saeb Erekat said on Wednesday that “there is no point in having a Palestinian state without East Jerusalem with the Al-Aqsa Mosque, Church of the Holy Sepulchre, the Old City and the walls as part of the Palestinian capital.”

Senior PLO executive committee member Ahmad Tamimi said that Trump’s remarks were clear evidence that the US retained its bias towards Israel. He added that the US plan to resolve the conflict between Israel and Palestine without East Jerusalem as the latter’s capital was impossible from the perspective of not only the Palestinians, but also the Arab and Muslim world.

The Trump administration has been promoting and touting its grand, breakthrough plan for Middle East Peace for some time now, calling it “the deal of the century.” However, few details have been revealed and it has been marked by an attempt to exclude the Palestinian Authority. Donald Trump assigned his son-in-law, Jared Kushner, and the US envoy to the Middle East, Jason Greenblatt, with the task of winning support for the deal among the Arab world, without much luck.

The Palestinian resistance group Hamas also denounced Trump’s comments. Senior Hamas member Sami Abu Zuhri termed them “dangerously audacious”, calling upon the Palestinian Authority in the West Bank to revoke its recognition of Israel and to terminate the security arrangement it operates with Israel.

Israel, on Wednesday, announced plans to build 1,004 more illegal houses in the occupied West Bank. The settlements are a violation of international law and a major point of contention in the peace negotiations between Palestinians and Israelis. The Trump administration has not made any efforts to stop Israel from building new settlements.