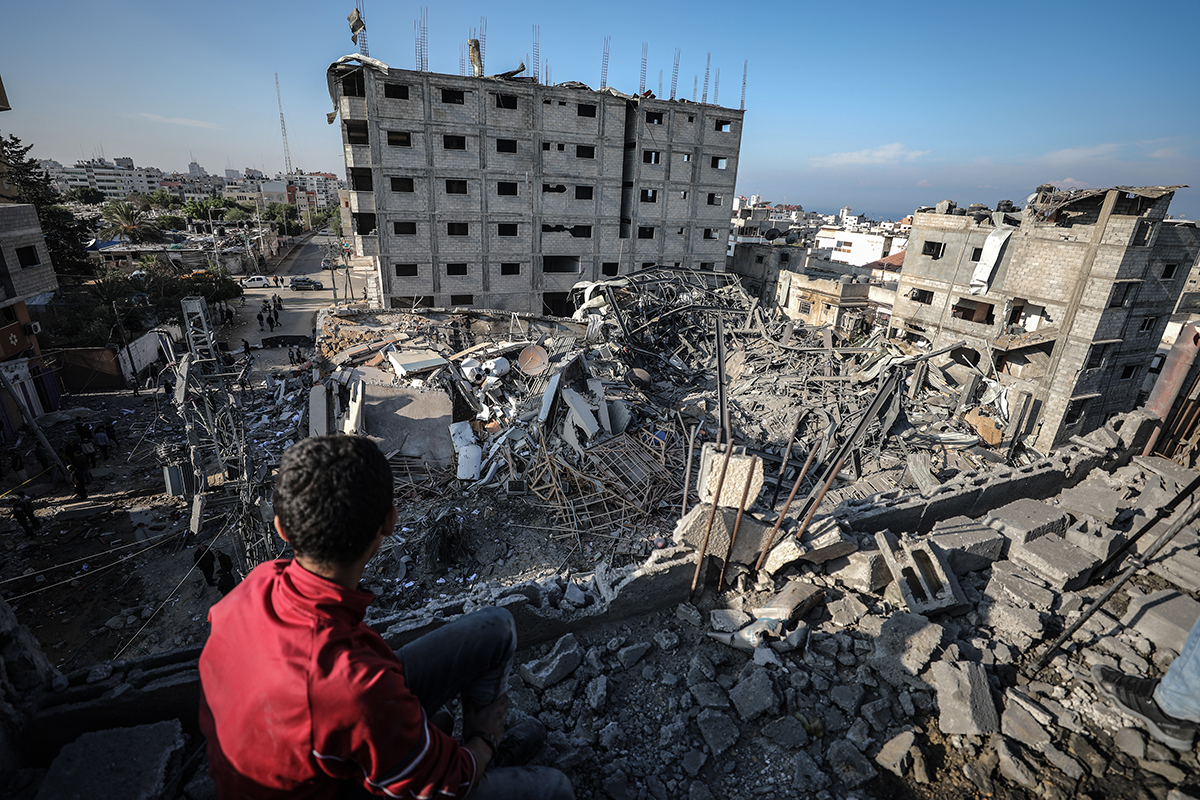 At least six Palestinians were killed and over 20 wounded after Israel resumed airstrikes on Gaza on Monday night. The exact death toll is unknown as of now, as Palestinians scrambled through wreckage wreckage and debris left behind by a full night of bombardment. Israel’s attack on Gaza on Sunday night had left at least seven Palestinians dead.

More than 100 locations were reportedly bombarded on Monday, including the biggest broadcast channel of Gaza, Al Aqsa TV. Israel Defense Force (IDF) announced in a statement last night that Hamas, which is the ruling party in Gaza, will “feel the power of the IDF’s response in the coming hours”.

The word “response” was used in IDF’s statement as a reference to the around 370 rockets that were fired from the Gaza strip on Monday into southern-Israel or the occupied Palestinian territories.  At least 60 of these rockets were intercepted and destroyed mid-air by Israel’s Iron Dome missile defense system.

One of the rockets that passed through is believed to have hit a house in the illegal settlement of Netivot, in southern Occupied Palestine, according to Quds News Network, which uploaded a clip showing rubble and blood stains in the damaged house. Another clip showed a fire in the Sderot settlement, minutes after the rockets were launched. Israel claimed a total of 70 of people were wounded and one killed from the rockets.

A mortar was fired at a bus carrying Israeli defense personnel in southern Israel, wounding two people inside. The consulate general of Israel to the midwest published from its Twitter handle, a picture of a bus burnt in Jerusalem years ago, claiming that “Hamas continued targeting Israeli civilians, rather than helping the people of Gaza”.

However, the biggest broadcast channel in Gaza, Al Aqsa TV, aired the video of the attack on the bus showing that it was not a commuter bus but one carrying defense personnel. Later in the night, the building of the TV channel was bombed by Israel using F16 missile.

Hamas said the rockets were in retaliation to the airstrikes on Gaza by Israel on Sunday night. Hours after Israeli Prime Minister Benjamin Netanyahu announced at a press conference in Paris on Sunday, November 11, that he was exploring possibilities of agreeing on a long-term ceasefire with Hamas, IDF forces, deep inside Gaza – three kilometers into the city of Khan Younis – fired from a civilian car, killing two Hamas commanders.

When the car was chased by Hamas, an exchange of gunfire erupted between the two, in the course of which one IDF soldier was killed and another wounded. In order to provide covering fire to enable the escape of the IDF personnel, Israel carried out airstrikes across Gaza on Sunday night and into Monday morning, by the end of which, at least seven Palestinians were killed.

Hamas suffered at least three casualties that night, including one of its commanders, Nour Baraka. As his dead body, along with that of six other Palestinians, was being carried to the burial ground in a coffin wrapped in the Hamas flag, thousands of civilians gathered around, chanting “revenge”.

It was following this that Hamas sent its 370 rockets into southern Israel. The Israeli bombings that followed were also accompanied by artillery and tank fire.

Airstrikes on Gaza continued into Tuesday morning, with the latest reported from the city of Rafah. Hamas warned that if Israel did not stop its bombardment of Gaza, it would begin to launch rockets on northern Israel as well, an area it has so far not targeted.

Blaming Israel’s operation deep inside Gaza for the flare up, Moscow urged Israel to de-escalate and begin a peace-process. “A new war in Gaza would be an incredible tragedy,” UN secretary-general Antonio Guterres warned. Egypt and UN – which have been working since the end of last month to negotiate a ceasefire between the two parties – have offered to mediate. Israel, however, rejected the offer and said it would not negotiate a ceasefire.

The ministers of Israel’s security cabinet met on Tuesday at Tel Aviv to discuss what steps Israel will take.

Calling for solidarity, the Popular Front for the Liberation of Palestine (PFLP), said in a statement:

“Palestinians in Gaza are not alone! And they must not be left alone. This attack is not only carried out by the Israeli occupation alone, but by the imperialist powers like the United States, France and Britain that arm and support the settler colonial racist state to the hilt. The reactionary Arab regimes that plot how to dismantle Palestinian rights and existence while raining destruction and death on Yemen are also complicit in this onslaught.