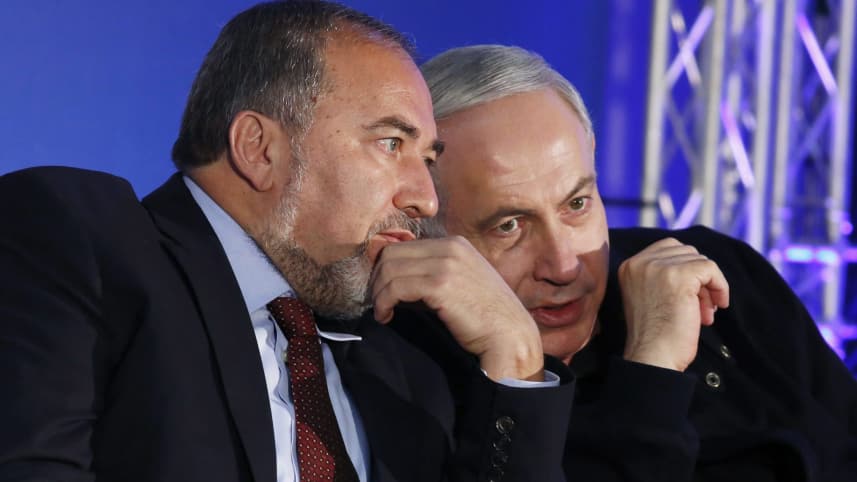 Following Lieberman’s  resignation, Bennett had demanded the defense portfolio for himself but prime minister Benjamin Netanyahu refused. The withdrawal of Bennett’s party will leave the government with only 53 seats. If Netanyahu is not able to bring back Bennett or find fresh supporters, an early election will be held.

The ceasefire with Hamas, which led to the current political crisis, came into effect on Tuesday following 36 hours of conflict, sparked by an Israeli operation in Gaza. A few hours before the Israeli operation, Netanyahu, speaking at a press conference in Paris, told reporters that he was seeking an agreement on a long-term ceasefire with Hamas, which rules Gaza. He also stated his intention to avoid an unnecessary war.

Netanyahu defended his decision to allow, under international pressure, the transfer of $15 million from the Qatari government to pay the salaries of the civil servants administering Gaza. This transfer was necessary to prevent a complete humanitarian collapse in Gaza, where an Israeli blockade has led to severe shortages of essential commodities, including food and medicines.

However, hours after his announcement, Israeli forces initiated the latest round of conflict. An lsrael Defense Force (IDF) team fired at Hamas personnel from a civilian car, killing two of its commanders and other personnel. The team was almost three km inside Gazan territory.  While Palestinian reports claimed that the IDF team was on an assassination mission, Israeli and Arab reports indicated that it was in fact a covert intelligence operation which went wrong.

While the car was chased by armed Hamas operatives, who killed one IDF officer and injured another, Israel carried out airstrikes across Gaza to cover the retreat of the team. Hamas responded by firing 17 rockets into southern Israel, although no injuries were reported. By the morning of Monday, seven Palestinians had died.

In retaliation, Hamas fired a barrage of rockets into southern Israel, regarded as occupied territory by the Palestinians. A bus carrying IDF forces was struck by a mortar, injuring two security personnel. Israel reacted with more airstrikes and tank fire.

By Tuesday morning, about 150 buildings – including the headquarters of the biggest broadcast channel of Gaza – were destroyed by Israel. Hamas retaliated with almost 400 rockets, this time overwhelming Israel’s Iron Dome missile interceptor system, forcing settlers in southern Israel to flee for cover.

By the time the 36-hour showdown came to an end with the ceasefire, another seven Palestinians had been killed, and dozens of Palestinians and Israelis injured.

At a cabinet meeting prior to the decision on the ceasefire, four ministers, including Lieberman and Bennett, reportedly opposed the plan and called for harsher measures against Gaza. However, they were in a minority and the ceasefire was agreed upon.

Faultlines in the right-wing?

Soon after the ceasefire, tensions between Lieberman and Netanyahu came to a head. Previously, after Lieberman had expressed his opposition to the cabinet’s decision to allow the sale of gasoline and natural gas to Gaza, he was forbidden from making any decisions on the subject without consulting the cabinet. However, last month, Lieberman had blocked Gaza’s fuel supply. The cabinet reportedly learned about this only from the news.

For Lieberman, the ceasefire seems to have been an opportunity to prove his right-wing credentials by raking up a number of issues. While quitting, he also claimed he had opposed the transfer of Qatari money to Gaza last week.

Defending the ceasefire, Netanyahu claimed Hamas had begged for an end to the conflict. However, the evening before the ceasefire, a spokesperson of Hamas’ armed wing had warned in a statement that, “about a million Zionists will be waiting to enter into the circle of our missiles if the decision of the enemy is to persist in aggression.” This indicated that Hamas was willing to fire rockets into hitherto unaffected areas of Israel.  According to Israeli army assessments, Hamas is in possession of over 20,000 more rockets and mortars of varying caliber and range.

It is also important to note that Netanyahu’s motivation behind agreeing to the ceasefire has nothing to do achieving peace in the region. After all, he has made amply clear his determination to derail a two-state solution, as explained by an analyst in Haaretz.

“A war in Gaza or a drip-dropping of mortar fire on the [Israeli] communities near the border”, he argued, “will erode [Netanyahu’s] standing as “Mr. Security.” Better to take what he believes will be a short-lived hit to his popularity now, present himself as “the only responsible grownup” and closer to the elections, win back the hearts of his hard-right base with racism toward Israeli-Arabs and incitement toward the Left, just as he did in 2015.”

Nevertheless, accusing Netanyahu of being soft on Hamas, leaders of the opposition Zionist Union party – which is in alliance with the center-left Israeli Labour Party – and the centrist Yesh Atid toured the the illegal settlements in the south to incite the settlers against the ceasefire.

Criticizing this opportunistic war-mongering, the chairperson of the leftist Meretz party, Tamar Zandberg, said “It is tempting to attack Bibi’s [Netanyahu] hypocrisy regarding Hamas. Indeed Lapid and Gabbay [leaders of Yesh Atid and Zionist Union respectively] did not resist the temptation, joining the warmongers and trying to attack him from the right.”

To counter their warmongering, she, along with leaders of her party, also traveled to the region, placating residents and urging them to support the ceasefire. “We can’t have another war. War means more dead soldiers and more children in shelters, and in the end, we’ll be back where we started. The government must do everything to reach a ceasefire as soon as possible and then move toward a greater diplomatic solution,” she said.

Notwithstanding these efforts, on Tuesday evening, after the ceasefire was agreed upon, about 500 Israeli settlers blocked the entrance to the illegal settlement of Sderot with burning tires. They also held a demonstration against the ceasefire, chanting “Bibi go home”.

The Israeli political scenario has thus descended into various groups accusing others of not being harsh and violent enough, and demanding more extreme solutions.  Netanyahu has already warned against repeating “historic mistake” of 1992, when a right-wing government was brought down, and its left-wing successor negotiated the Oslo Accords. It is likely that in the coming days, he and his former allies will resort to more such polarizing and inflammatory rhetoric

(The article was updated to reflect new developments)