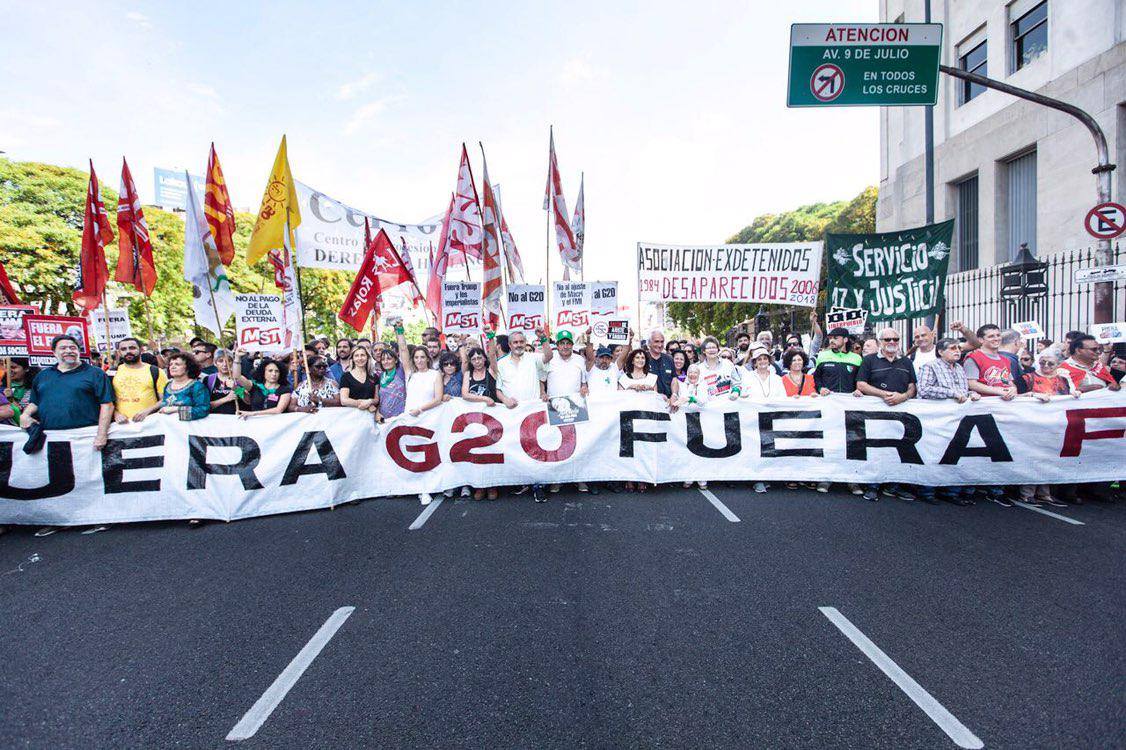 In the weeks leading up to the grand G20 Summit in Buenos Aires, which itself lasted a total of 48 hours, the Argentine government and hegemonic media warned the public about the potential for violent mobilizations by ‘extreme left-wing groups’ against the summit. At the same time, international and national news, social media and public service advisories constantly provided information that Buenos Aires and the surrounding areas would become a heavy militarized, almost non-functioning zone during the summit, with all trains and metro service being suspended and a shocking 22,000 police personnel reported to be on the ground. Not to mention the news that hundreds of US troops would be stationed in neighboring Uruguay to ‘protect’ Trump while he attended the summit for a day.

The media and state’s campaign of terror and fear was designed to discourage social movements, organizations, trade unions, and other civil society formations, who had been planning to protest the summit for months, from carrying out their just actions. For some, the threats and pressure were enough, several major mass movements in Argentina decided not to mobilize on the streets on Friday. Of the organizations that did march, many decided to send smaller contingents and most agitation and propaganda actions like graffiti and stencils, commonplace in many types of mobilizations in Argentina, were discouraged as the overwhelming police presence and surveillance could mean that such actions could be harshly punished.

Nonetheless, thousands took to the streets on Friday, November 30, to raise their voices against the G20 group and all that it stands for. Several Argentine and Latin American militants and leaders gave their perspective on why it was important to mobilize against the G20.

Feminist leader Claudia Korol of Pañuelos en Rebeldía and Feminists of Abya Yala stated: “Yesterday we held, among many activities, a feminist court against the exploitative, racist and patriarchal policies of the G20. We organized a series of denouncements along three lines: the advance of fascism in the continent, the advance of the extractivist policies over territories, communities and bodies, and migrations. Seeing the denouncements made by Black, indigenous, peasant, migrant and poor feminist comrades, we said that the G20 and its policies affect all people and this is why it is a struggle of all. However, it affects women in a particular way due to social division of work. For example, the care work that has always fallen on us becomes more intense and at the same time, becomes more precarious. There are direct consequences like political femicides like Berta Cáceres, Marielle Franco and Macarena Valdés, but also less visible consequences that intensely impact the lives of women with these policies.”

Norita Cortiñas, who is one of the founding members of the Mothers of the Plaza de Mayo and is consistently on the front lines of the struggles for justice, said “This government likes that they give us instructions on how we have to economically manage our country. It is the government itself that brings them here, and they didn’t come alone. They are coming here completely protected and in order to receive them, [we have] basically declared martial law, militarized [the city] and filled it with police. We do not want this, we want them to go, and we want them to leave us alone. They should not come here to give us instructions about how to make adjustments. They detained 5 people [on Friday] because they felt like it and they are holding them with a law that we did not want, which is the Anti-repressive law. We want to be marching with all of the rights that correspond to us.”

Lana de Holanda from Brazil was also present at the march. She is a transwoman, a feminist and was the advisor to Brazilian councilwoman Marielle Franco who was assassinated in March 2018 by hitmen in Rio de Janeiro. Lana stated “It is very important to protest today because the Global North thinks that Latin America, like Africa, is the dumpster of the world. We cannot allow our natural reserves to be used for the exploitation of our people. Marielle would be very proud of our struggle, without a doubt. To see a mobilization with so many indigenous, black women, many from Brazil. She would be very proud and to see that the transformation that she believed in so much, will one day happen.

Fidel Ruiz of the Garganta Poderosa, an organization that works primarily in villas which are poor, marginalized neighborhoods in the city, said, “It is important to be on the streets because we are organizations that represent the villas, the favelas. Often, they want to distance what happens with the G20 from our reality, but what is resolved there is what will affect us the most in the neighborhoods. So we are here today to repudiate this group, as well as the international organization [IMF] that today makes us prisoners to its economic policies. Everything that happens there inside will affect our people.”

Laura Capote of the Colombian social movement Marcha Patriótica (The Patriotic March) and a member of the Operative Secretary of Social Movements of ALBA, said: “For us in ALBA Movements, it is fundamental to participate in this march today in Buenos Aires. It is the first time in the history of G20 that they are holding a meeting in Latin America. We are against all of the policies that this group – the 20 ‘owners of the world’ – seek to impose on all the poor people of Latin America. Here, there is unity, there is struggle, there is organization and that is why today we are saying to the government of Mauricio Macri and to the ‘owners of the world’, that the people resist, they take to the streets, they struggle and we will not allow ourselves to become a colony again.”

The march was the final event in the week of action against the G20 Summit organized by the ‘Out G20 IMF’ Platform, which brings together dozens of political and social organizations in Argentina. The week involved talks, workshops, forums, panels, a people’s economy fair, and a music festival.