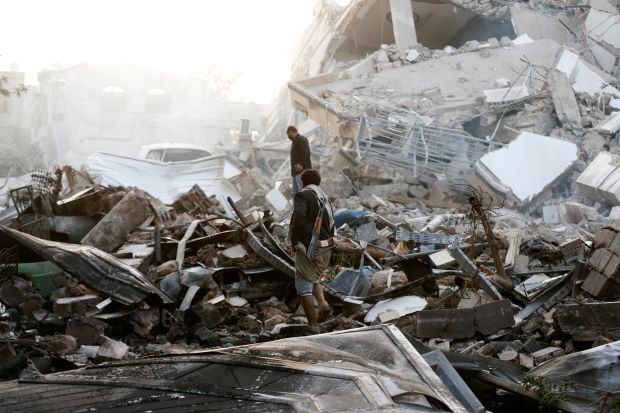 Despite the ceasefire agreement, clashes were reported on Monday morning.

Yemen’s port city of Hodeidah continued to be plagued by fierce fighting between the Houthi militias and forces backed by the Saudi-led coalition on Sunday, despite the two warring sides reaching a UN-mediated ceasefire agreement on December 13.

29 fighters were killed on Saturday night in airstrikes and clashes in Hodeidah, 22 of them Houthis. Seven Houthis also ended up getting captured during an attack on Al-Durayhimi district, 20 kilometres south of Hodeidah city.

The UN’s envoy to Yemen, Martin Griffiths urged both sides to respect the ceasefire, tweeting on Sunday, “The special envoy expects the two parties to respect their obligations as per the text and spirit of the Stockholm Agreement and to engage in the immediate implementation of its provisions.”

Representatives from the rebel Houthi militia and the representatives of former President Abdrabbuh Mansur Hadi had signed an agreement to declare a ceasefire in Hodeidah on December 13 in Stockholm, Sweden. The development was lauded by the UN (United Nations) Secretary-General Antonio Guterres as signaling “real progress” in the effort towards alleviating the conflict in Yemen. The agreement has been perceived as laying the groundwork for another round of talks which will be held in January next year.

Since the revolution of 2011 against former president Ali Abdullah Saleh, the crisis in Yemen has morphed into a devastating humanitarian crisis characterised by widespread political and military violence between the Houthi rebels and the Saudi-led coalition backing the Hadi government.

As a result of sustained aggression by US-backed Saudi led international coalition, Yemen has suffered a severe humanitarian crisis. These factors have contributed to extreme levels of food insecurity with the population experiencing varying degrees of food insecurity, malnutrition, and even risk of famine. The situation has been further exacerbated by the offensive in Hodeidah, a port city which serves as the entry point for nearly 70 percent of humanitarian aid and 90 percent of commercial needs according to World Food Programme estimates.

The agreement calls for the withdrawal of all Houthi forces from the Hodeidah port along with the ports of Saleef and Ras Isa. Correspondingly, the Saudi-backed government forces will also be required to withdraw. Martin Griffiths, the UN special envoy for Yemen, has said that the ceasefire will enable the establishment of a “humanitarian pipeline” for the delivery of aid.

These negotiations also signify significant UN intervention with the deployment of UN-supervised neutral forces in the area. Furthermore, the control of the ports will be transferred to local forces which will then send the ports’ revenue to the Central Bank. The Bank will then disburse salaries to government employees in Houthi-held areas.

The agreement, brokered by the UN, also details mutual redeployment of forces from both sides to specific posts outside Hodeidah city. Redeployment will be overseen by a UN-supervised joint committee which will have to provide weekly reports to the UN Security Council.

Ceasefire in Hodeidah marks the culmination of a week of UN-sponsored talks between Yemen’s Foreign Minister Khaled al-Yamani and Mohammad Abdul Salam, the head of the Houthi delegation. “The fact that we came to an agreement on Hodeidah – [which] many would consider the most difficult of the problems on the table – gives us the hope that this process will now be moving step by step and that we will be able to overcome all the obstacles that we face,”, Guterres was quoted as saying.

Earlier in the week, both sides agreed to a prisoner swap of nearly 15,000 captured individuals scheduled for January 20th of next year. There has also been some progress with regard to addressing the conflict in the city of Taiz however details remain scarce.

The agreement has emerged in the context of mounting international pressure to end the conflict in light of the worsening humanitarian situation and the widespread condemnation of the Saudi leadership in the aftermath of the murder of Jamal Khashoggi.

The efforts in Sweden have been welcomed by the international community as initiating a possible resolution of the conflict. Nevertheless, any substantial changes in the situation will depend on how the directives of the agreement play out over the next few months and their impact on the next round of talks scheduled for January 2019.

More than 14 million Yemenis are on the brink of famine in the war torn country. At least 60,000 people have died in Yemen since 2015 when the Saudi led coalition intervened in the country to fight the Houthis on behalf of the Hadi government. According to a recent report by the international child relief NGO Save the Children, more than 85,000 children have also died because of starvation since 2015.