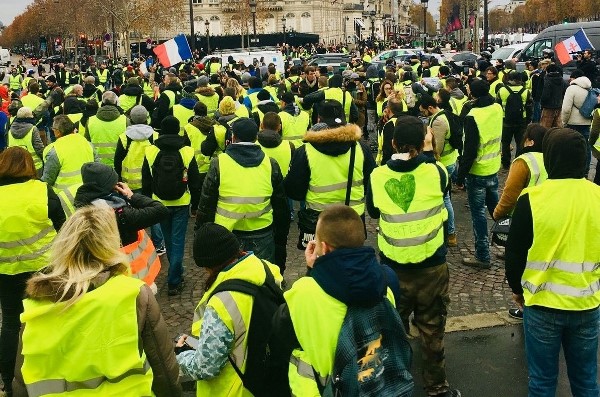 Ever since the protests broke out on November 17, hundreds of thousands have hit the streets across the country: File Photo by Patrice Gravoin

The eighth week of the Yellow Vests movement saw around 50,000 protesters hitting the streets across various cities and towns of France this weekend. A significant number of protesters were women. The protesters demanded that the media look past the stray incidents of violence and focus on the root causes of the movement.

Meanwhile, on January 8, the BBC reported that the French government was considering a new law against unsanctioned protests and the wearing of masks during agitations.

The massive mobilizations over the weekend follow a slight decline in number of those who had gathered on December 29 (around 32,000), which set the impression that the movement was weakening. These are official figures from the interior ministry, which many believe to be a gross underestimation of the actual numbers.

But the lull in the seventh week of protests is being attributed to the holidays, as the French reclaimed the streets again in Act VIII of the Yellow Vests.

The movement began on November 17 after the Emmanuel Macron-led government announced a hike in fuel taxes, purportedly to combat climate change. This decision triggered the anger of the masses against all the anti-poor reforms that Macron has passed since taking office. The protesters clarified that they were not against climate action but against being targeted unfairly. They pointed out that industries and other mass polluters were being allowed to function without any additional scrutiny or penalty for their actions.

In the face of huge mobilizations, the government was forced to roll back the tax hike. In addition, Macron also announced tax cuts for pensioners and asked bosses to give bonuses to their workers. But these small overtures have failed to placate the anger of the working and lower middle classes.

The protesters are demanding that the system be more inclusive of the needs of the poor, who have borne the brunt of Macron’s anti-poor policies.

Instead of agreeing to the demand for a rise in minimum wage, Macron announced that the government would increase the top-up it pays to low income workers. This would not cost the employers anything as the money would most likely come from public service cuts. However, this top-up would only result in a small gain of 20 euros for the workers as this increase was already planned. Even the end of year bonuses would be tax free for the employers if it is under 1,000 euros.

In addition to to a rise in incomes, Macron’s resignation and the reinstatement of the abolished wealth tax, the Yellow Vests have also begun demanding a constitutional reform which would make the democracy more participative. They want referendums to be called for deciding various matters if enough citizens petition for it.

In the protests this weekend, a group of protesters stormed into a government ministry compound in Paris after smashing the door with a forklift. As in the previous weeks, the protesters gathered in the richer areas of Paris to hold demonstrations. According to a police statement, 35 people were arrested.

Bordeaux, Toulouse, Rouen and Lyon were some of the other towns and cities which saw a significant number of protesters on the streets. In Bordeaux, the police dispersed around 4,600 protesters with tear gas. Peaceful protests were met with tear gas in Rouen as well.

A rise in police violence has also been reported, with many incidents of needless force by police officers recorded on phone cameras and circulated on social media. Amnesty International also denounced the police violence as excessive.

Security forces have been enforcing blockages in order to keep the protesters from congregating. Many have described this as effectively banning the right to organize and hold protests.

Even the patience of the police is wearing thin with strenuous duty hours and stretched resources. On December 19, the police held a go-slow for passport control duty and some police stations were shut because of unsettled overtime dues. This resulted in the government increasing police wages by 150 euros within 12 hours.

Inspired by the Yellow Vests, demonstrators in countries such as Canada and the Central African Republic, are organizing similar demonstrations while wearing high-visibility jackets. The demands of the people protesting outside France are also similar and expressive of the general anger and dissatisfaction with the widening wealth disparities under the current neoliberal regimes.

Government officials in France continue to be dismissive of the movement. Education minister Jean-Michel Blanquer was quoted as telling the LCI news channel that France needs to stop being a country that listens to those who cry the loudest.

With the movement refusing to back down, and the people becoming more determined for their demands to be met, the government will need to rethink its current unresponsive stance.