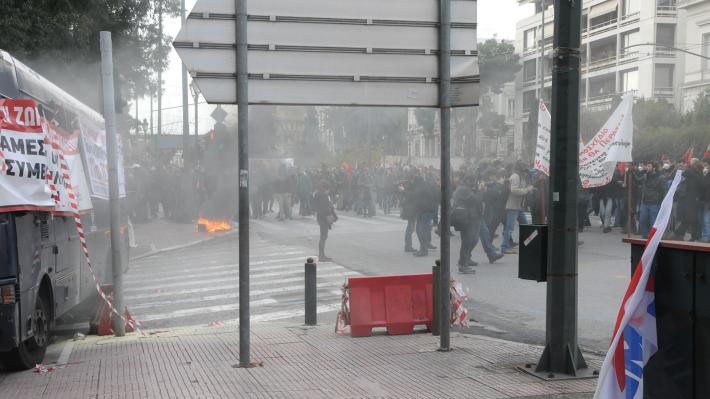 Teachers, students and union leaders were injured in the police repression.

The police crackdown on teachers who had marched on Friday to parliament has been widely condemned by the progressive sectors in Greece. According to reports, around 2,000 teachers took part in the march which was organized by various unions, including the All-Workers Militant Front (PAME) to protest the new government bill on the recruitment on teachers. The riot police brutally charged the rally with grenades and teargas shells, resulting in injuries to many teachers, students and trade union leaders.

The government bill for the new recruitment-appointment system looks a new selection process for the planned hiring of 15,000 new teachers over the next three years. Teachers’ unions said that the state schools were under-staffed and that the government should make permanent appointments rather than going for hire and fire temporary contract appointments. Reuters reported that Greece froze hirings in the the public sector during its protracted debt crisis which began in late 2009.

The Communist Party of Greece (KKE) condemned the brutal assault on the teachers. KKE leaders, including Giannis Delis, MP, and Pan-Hellenic Secretariat of Teachers of All-Workers Militant Front (PAME) executive member Thodora Drimala, were injured. “This attack shows that the SYRIZA-ANEL government has no hesitation in enforcing its policy, which in the field of teachers is expressed by the hostage and unemployment of thousands of contract and indefinite, as well as the thousands of gaps in schools”, KKE said.

PAME said the mobilization on Friday was the best answer to an unworkable government policy. “The government cannot silence the dissenting voice of thousands of teachers with terrorism, mockery and electoral deception.” PAME urged all teachers’ associations to denounce and condemn this brutal assault.

Various student’s groups also denounced the SYRIZA-ANEL government’s repression  and expressed solidarity with educators and students who are in strike.

902.gr reported that a protest gathering was also held on Saturday at noon, by Primary Teachers’ Associations outside the Ministry of Citizen Protection. In that meeting, teachers expressed their strong protest against the violent crackdown. The teachers association has also given a call for strike on Monday, January 14th.