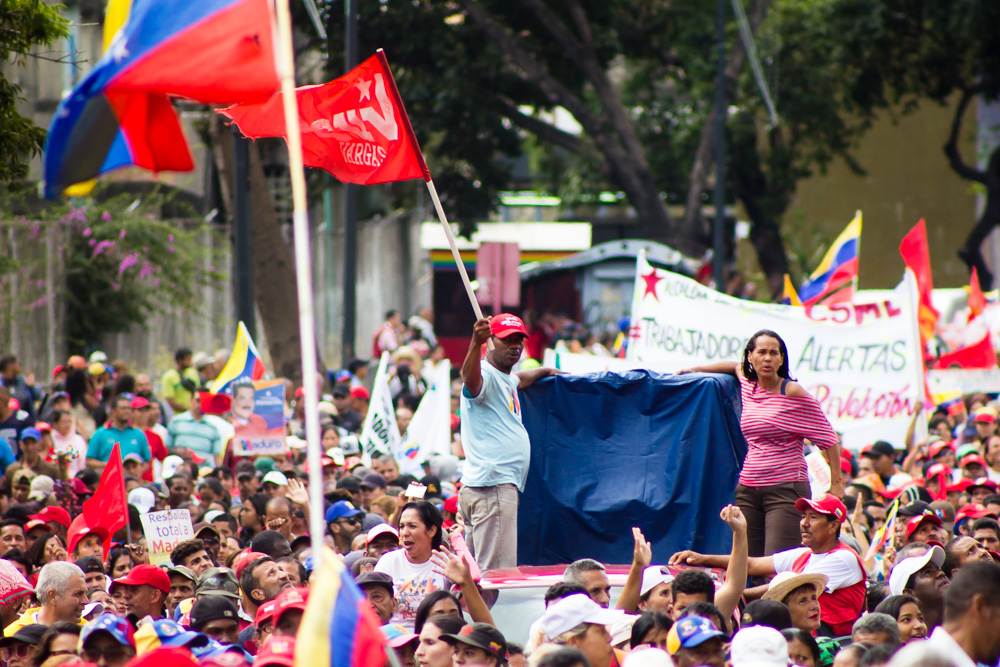 On January 23, yet another coup attempt was launched in Venezuela at the behest of the United States.

The US has a long history of supporting dictators and oligarchs in the region, and in Venezuela, especially of the most brutal kind. But even by those standards, the attempt by the largely unknown Juan Guaidó to claim the presidency that by right belongs to Nicolás Maduro was especially cynical. Maduro, after all, had not only won the election in May last year but had continuously extended the offer of dialogue to an opposition which had relentlessly subverted his rule. The election process in Venezuela has been certified as scrupulous and fair by a variety of international authorities. And Venezuela has moved beyond many other democracies by seeking to institutionalize and deepen collective decision making in matters as basic as the distribution of food and other resources.

On the other side are the United States whose establishment is caught in a conflict over what sort of barriers it must build to keep out the victims of its own policies; Colombia, whose government idly stands by while its social leaders are being massacred; Brazil whose president believes his country’s military dictatorship did not kill enough people; and other luminaries of the Lima Group. Yet, Venezuela is the one which is ‘undemocratic’, Venezuela is the one whose people need to be told by external forces who their leader should be.

The cynicism becomes all the more appalling when we look at the protagonist of this farcical coup, Juan Guaidó, who comes from a fringe party, Popular Will. Many of Popular Will’s leaders are in jail or exile because of their involvement in the brutal guarimbas of 2014, which led to many deaths and disgusted even opponents of the regime. It is this Guaidó, the product of a long tradition of regime change initiatives that the west celebrates as democracy’s new hope.

On January 29, the US announced it would block 7 billion dollars in assets of the Venezuelan state oil company, Petroleos De Venezuela SA (PDVSA), and 11 billion dollars of their export revenue. The US is considering allowing Guaidó access to this wealth. His ‘ambassadors’ have been recognized by countries from the Lima Group. He writes an op-ed in the New York Times. It seems that the right kind of training, support from the right quarters and an ability to mangle a constitutional provision are the true signifiers of a legitimate leader. Winning 68% of the votes cast, like Maduro did in the elections, is not enough.

But ridiculous as they seem, Guaidó and the forces behind him are capable of real damage. On January 22, the National Assembly of Venezuela, which has been in contempt of court since 2016, and whose actions are null, “passed” the Law of Amnesty and Constitutional Guarantees, which offers guarantees to police, military and civilians that collaborate with the “restitution of democracy and constitutional order in Venezuela, violated by the de facto regime lead by the person who today is usurping the Presidency of the Republic”.

The law essentially calls for functionaries of the police and military to openly rebel against the democratically-elected government and ensures that they will receive amnesty. There have been a number of attempts at urging the Venezuelan military to rise against Maduro. These attempts have all failed as the National Bolivarian Armed Forces have been firm in their support to the democratically elected president. Yet, these regular appeals and attempts to mobilize people against the government on such flimsy pretexts can be extremely harmful to a society that is already struggling under the impact of heavy sanctions.

These sanctions have indeed taken a heavy toll on Venezuelan society, causing millions of dollars in losses and directly attacking the people by impeding the purchase of crucial products and goods like medicine and food and diminishing the available funds for social projects. The former UN rapporteur Alfred de Zayas has termed the sanctions a crime against humanity and against all international law. Yet, these have continued, causing great pain to the people.

The continuation of these sanctions is a failure of multilateral processes. Yet, the US has sought to stretch these even more. On Saturday January 26, US secretary of state Mike Pompeo called for an extraordinary session of the UN Security Council in an attempt to convince the council to “pick a side” and stand with the United States and recognize Juan Guaidó as president of Venezuela. However, his attempts to gain support for the coup diplomatically failed. 19 of the 35 countries rejected Pompeo’s remarks and refused to join the US in recognizing Guaidó and also rejected the efforts of the US to encourage confrontation and violence in the Latin American country.

Vasili Nebenzia, the permanent representative of Russia to the UN, responded to Pompeo’s demand by stating, “You are completely ignoring the sovereignty of Venezuela by imposing the decisions that are convenient to you and denying the people the right to solve their problems for themselves…We call on you to respect the legitimate power, to not intervene in internal issues of a sovereign country, to not impose on the Venezuelans’ decisions from the exterior. rather help them to resolve their problems in a peaceful way”.

Closer to home, the US has been more successful. Luis Almagro, secretary general of the Organization of American States, has lost no chance at hitting out at Maduro. The Lima Group has only just stopped short of condoning a full-fledged military intervention. Uruguay and Mexico have been among the few voices of sanity, offering to mediate between the government and the  opposition. But it is true that between the Colombia of Ivan Duque and the Brazil of Jair Bolsonaro, things do not look that great in the region for Venezuela’s legitimate government.

And at the apex of this pyramid of chaos is the United States of Donald Trump. 16 year after the Iraq war, there is no more pretense. John Bolton has made it clear that the massive oil reserves of Venezuela will be a boon for American oil companies. His now infamous notebook, which carried a note saying “5,000 troops to Colombia”, marked a new low in crude posturing. Elliot Abrams has been dragged out of the bloody pages of history to preside over what the establishment hopes will be another regime change. The US is also intensely lobbying its allies. Canada has already recognized Guaidó. The European Union has threatened to do the same if Maduro does not call for elections in a few days. The UK has seized Venezuela’s gold reserves. Countries across the world need to think deeply about the state of their finances if they fall foul of the imperial designs of the west.

But hope is not lost. Venezuela’s position has been immensely bolstered by the strong support offered by China and Russia. Defying the right wing surge in the region, Cuba and Bolivia, whose political and ideological bonds to the Bolivarian Revolution and the people of Venezuela are strong, have been unflinching in their support. And across the world, leftist parties, people’s movements and progressive organizations have taken to the streets in a powerful show of solidarity with Venezuela.

But ultimately, it is the people of Venezuela who will be in the forefront of defending the legacy of Simon Bolivar and Hugo Chavez. Venezuela is a project, a process, an attempt at defying centuries of oppression and the greed of neo-colonialism. It is not perfect yet it is essential it continue. As the US-led global cabal yet again seeks to hide its greed and the bankruptcy of its ideology under the long-discredited argument of legitimacy and process, it is only fitting that the streets of Venezuela resound with a simple slogan: Yankee, Go Home!