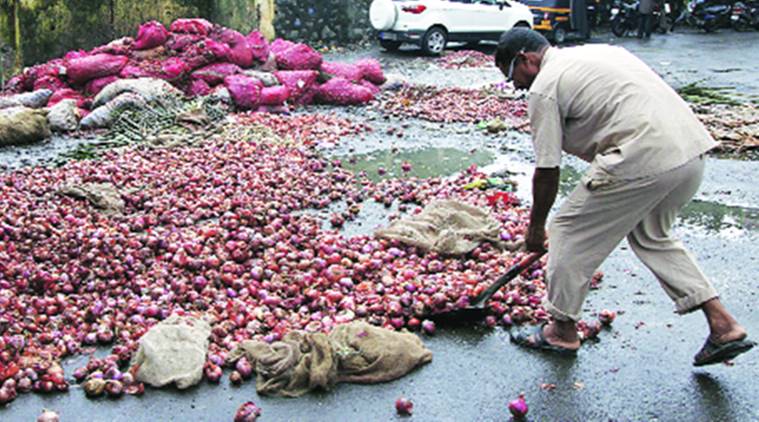 Farmers' rights activists have blamed the government for not reacting in time to address the crisis. Photo: Indian Express

As many as 18 farmers have already committed suicide across India this year as the agrarian crisis continues unabated. On January 19, four farmers committed suicide by consuming poison after they lost all their crops. The picture of the farmer, Dnyaneshwar Shivankar, who hailed from the Malegaon tehsil in the Nashik district of Maharashtra, led to serious criticism of the far right-wing Hindu government, led by Narendra Modi.

Almost 220 lakh tons of onion crops have flooded the market, which is around 40 lakh tons more than the country’s consumption capacity. This has directly impacted the rates of onion procurement on the ground.

According to Suresh Karale, a farmer hailing from the village of Valan of Rahuri tehsil in Ahmednagar district, farmers can’t do much even after investing over INR 60,000 (USD 843.16) in onion crops. “We only get just INR 20,000 (USD 280.72) in return. Our sheep help us to survive in this drought instead of these onions,” he said.

When the market falls badly, farmers turn to crops other than onions. This results in the shooting up of the onion prices in the next season, benefiting the farmers directly. Then, in the next season, a large number of farmers again shift to onions. The extra produce results in the falling of prices. And so on. This is the cycle of crisis. Over the last 30 years, this has been happening season after season.

No other market has seen such huge ups and downs in India. In just 18 months, the market has gone from INR 800 to INR 2,500 per quintal and back to INR 150, resulting in chaos. Experts believe that zero planning on the part of the government is the root cause of this crisis.

“The most important policy could be the ‘Bhavantar Scheme’. The government should decide the production cost of onions per kilogram. Suppose if it is INR 8 per kg, and if farmers are getting just INR 3 or 4, then the remaining price should be given to the farmer as allowance so that their production costs are evened out and the farmers are not forced to take any extreme step like suicide,” recommends Nanasaheb Patil, director of the National Agricultural Cooperative Marketing Federation of India Limited.

The inconsistency in the government’s export import policy hurts farmers. There has been an extra production of 35 to 40 lakh tons per season for the last few years. India needs around 170 lakh tons of onions annually. The average production is around 215 to 220 lakh tonnes. So, India needs to come up with an export-oriented policy.

Experts believe that the exports would have increased if the government had given a 10% subsidy instead of 5%. This increased export would have also balanced the fall in prices of domestic market, which could have averted the current crisis.

By the time the the union government realized the seriousness of issue, it was too late. In December 2018, the export subsidy was increased from 5% to 10%, which will be continued till the end of June. It is believed that this might help exports and stabilize the domestic market.

All India Kisan Sabha’s Maharashtra general secretary Ajit Navale blamed the government for escalating the crisis. “It is not a problem of plenty. It is a problem of lack of mechanism. The cycle of less onions, higher rates, and huge crops, fallen prices, has been going on for years. This only helps the middlemen but not the consumers nor the farmers. So, there should be a mechanism to plan it well and it is the responsibility of the government to do so,” Navale said.

Swabhimani Shetkari Sanghathana’s leader and member of parliament, Raju Shetti, stated that the government was in a bid to keep the middle-class consumer happy, even at the cost of killing the farmers. “Per kg production of onion costs INR 8. However, farmers are getting INR 1 or maximum INR 2.”

“In this case, the government should have intervened and given direct subsidy to farmers. Otherwise, it should have taken steps to make the domestic market stronger. But to manage the headlines of consumer inflation below the average, this government is killing the producers. This attitude has literally broken the spine of Indian farmers,” Shetti noted.

(The article first appeared at Newsclick)