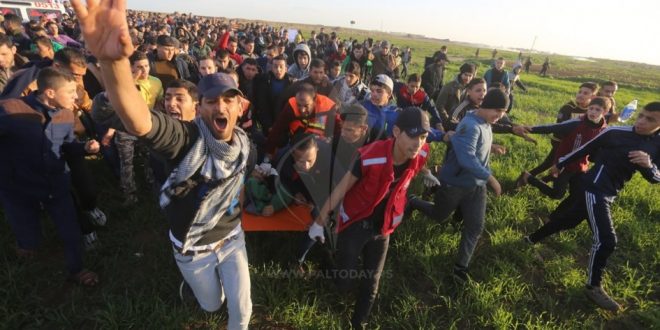 At least 295 Palestinian protesters have been killed since the Great March of Return protests began in March 2018.

On Sunday night, Israeli soldiers fired once again on Gazans who were taking part in the Great March of Return protests. This follows the fatal shooting of two Palestinian teenagers on Friday. The Al-Sha’b radio station in Gaza reported that Israeli soldiers fired tear gas and live bullets at Palestinians who were exploding sound and percussion bombs on the border. There were no reports of any injuries. Protesters also used IEDs (improvised explosive devices), burning tires, incendiary balloons and firecrackers, and resorted to using laser pointers to make it difficult for Israeli soldiers to target them from across the border.

According to Palestinian sources, the activists organizing the marches, as well as Hamas officials, intend to escalate the protests in the coming weeks and months. The decision reportedly came after the Israeli government refused to fulfill the promises that it committed to as part of the ceasefire reached between Hamas and Israel, and the subsequent calm since November which was mediated by Egypt.

The teenagers shot on Friday were identified as 14-year-old Hassan Shalabi and 17-year-old Hamza Ashtiwi. According to Gaza’s Palestinian health ministry spokesperson, Ashraf al-Qidra, Shalabi was fatally shot in the chest, east of Khan Younis city, situated about 25 kilometers south of Gaza city. Ashtiwi was shot in the neck with a live bullet during protests, east of the Gaza strip. Al-Qidra also said that 17 other protesters had received gunshot wounds and dozens of others had suffered from the effects of tear gas inhalation.

The weekly Great March of Return rallies, which began on March 30, demand an end to the over 12-year-long Israeli blockade of Gaza and the implementation of the right to return of Palestinian refugees, who were expelled from their homes during the establishment of Israel in 1948. Data released by the United Nations last month states that 295 Palestinians have been killed and 6,000 others injured by live ammunition since the beginning of these protests.

Meanwhile, in another development on Sunday, Israeli prime minister, Benjamin Netanyahu told cabinet ministers during a weekly cabinet meeting in Jerusalem that he would implement a new law to deduct a portion of the funds given to the Palestinian authority (PA) over its welfare payments to Palestinian political prisoners and their families. Israel collects tariffs and duties on behalf of the PA in accordance with the Oslo accords of 1994.